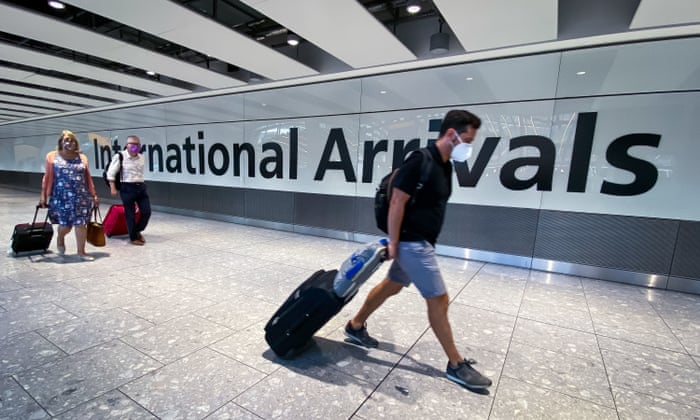 Potential plans to introduce a traffic light scheme for travel abroad have prompted concerns among scientists that the approach is too simplistic and could fail to prevent new variants from entering the UK.

Among the plans under consideration by the government to allow more travel as restrictions ease is a traffic light system, whereby countries are given a green, amber or red designation based on factors including case rates, levels of Covid variants and the status of the country’s vaccination programme.

However, the plans have raised concerns among some scientists. “The point about it is that any traffic light system will of course be used for people to go on holiday,” said Gabriel Scally, visiting professor of public health at the University of Bristol and a member of the Independent Sage committee.

The problem, he said, was that holiday resorts attracted tourists from many different countries.

“It is not quite as simple as looking at what the situation is in an individual country from which a flight originated,” he said. “We know people will mix together from all over the world, and this is what spurred the autumn surges of cases.”

Prof Rowland Kao, a professor of epidemiology at the University of Edinburgh who contributes to the Spi-M modelling subgroup of Sage, agreed that restricting travel to a few locations risks turning them into locations where super spreading events are common.

“Lots of people meeting together in close quarters, where social pressures mean physical distancing is less likely, means many transmission events can occur,” he said.

While international travel cannot be paused for ever, Scally said all those arriving in the UK should enter hotel quarantine.

Among other concerns, Scally noted many of the 40% of UK adults who have not yet been vaccinated may still be at moderate risk from the virus, while as infections surge in countries around the world the risk of new variants of concern emerging increases.

“That high level of cases is happening on our doorstep,” he said.

“A traffic light system is likely to be reactive to any changes in incidence, plus any new variants of concern. As we have seen repeatedly over the last 12 months, once a problem is clear on the graph, you’re quite literally behind the curve in terms of actions required to bring case numbers down,” he said.

“A proactive approach around border control would be of more help in reducing new cases. This would then limit the importation of new variants.”

A concern is that overseas travel could introduce Covid variants that were not yet common in the UK, including those that may evade, at least to some degree, the immune response induced by vaccines. The concern is augmented by worries that, as restrictions in the UK are relaxed, Covid will have a greater opportunity to spread.

Prof Robin Shattock, Covid-19 vaccine lead at Imperial College London, is among those who have warned that a traffic light system could be “leaky” to Covid variants.

“There are always possibilities of getting around that type of system. It might be a way of starting to release some travel, but it will need to be monitored very carefully,” he told PA.

Professor David Heymann, the chair of the WHO’s strategic and technical advisory group for infectious hazards, told the Guardian many countries are having to make difficult decisions about international travel, weighing up factors such as incidence of infection and vaccination coverage.

“When countries pilot an idea such as red, amber and green they will hopefully have a monitoring system in place that will permit them to assess the measures since there are no best practices guidelines that exist at present for this infection,” he said.