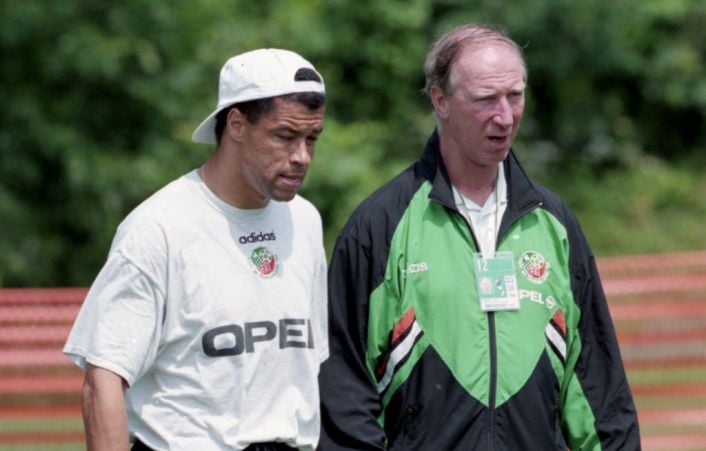 Paul McGrath said he was “so proud” after the touching moment in Finding Jack Charlton where his old boss smiled after recognising him in a video.

Writing in his Sunday World column, McGrath described how it felt watching Charlton recognise him despite the fact he was suffering with dementia.

He said: “I would like to thank all the people who got in touch to say how much they enjoyed my contribution to the Jack Charlton documentary.

“I really enjoyed my modest part in the making of it, and fair dues to my old Ireland captain Andy Townsend for all the work he put into it.”

McGrath added: “Many people said it was a lump in the throat moment for them when Jack looked at his laptop and saw me and named me.

“I was so proud too. But afraid that the next thing that might happen was that Jack would then fling the lap-top at the wall as all the trouble I caused him over the years came back to him.

“He didn’t of course, and it was a wonderful TV programme that raised a massive amount of money for dementia research.”

The documentary about legendary Ireland manager Charlton had its Irish television premiere on Virigin Media last week as part of a fundraising campaign for people suffering with dementia and their families.

Over the course of a week, €1 million was raised for the Alzheimer Society of Ireland.

Finding Jack Charlton charts the life of Charlton, both on and off the field, and his battle with dementia.

Gabriel Clarke and Pete Thomas’ documentary veers from heartbreaking, to exciting, to joyous as it delves through Charlton’s extraordinary life, from winning the World Cup with England as a player in 1966 to guiding the Republic of Ireland to three major tournaments.

You can read our review of Finding Jack Charlton here.