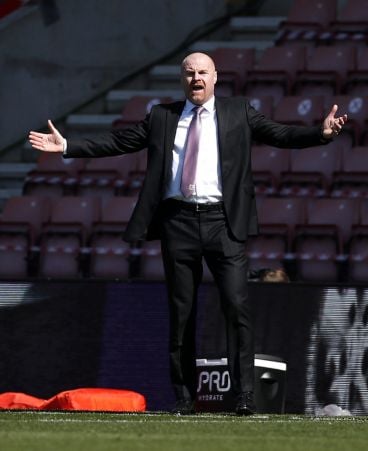 Burnley manager Sean Dyche felt his side should have had two second-half penalties in the 3-2 defeat at Southampton, © PA Wire/PA Images

The Clarets boss felt VAR should have intervened when Chris Wood appeared to have his shirt pulled by Jan Bednarek in the closing stages of a pulsating encounter at St Mary’s and for a possible handball by Ryan Bertrand during a separate incident.

Saints took a major step towards Premier League survival at their opponents’ expense after goals from Stuart Armstrong, Danny Ings and Nathan Redmond overturned a spot-kick from Wood and a strike from Matej Vydra.

While Dyche admitted poor Burnley defending was a factor in the turnaround, he was left bemused by the officiating.

Burnley, who remain on 33 points and with relegation still a lingering threat, have been awarded only two top-flight spot-kicks all season, the joint lowest in the division.

“I am frustrated. It’s one of them that got away from us through our own lack of awareness. We scored two goals, concede a soft one and then the second one we have given away and they’ve come back into it from nowhere,” said Dyche.

“In the second half, we had a go, they had a go. Woody has a chance, he’s impeded, his shirt is pulled.

“We got a penalty today but they tried not to give us it. Our record of penalties is terrible – everyone knows it’s the worst in the Premier League by a long shot.

“They (the officials) tried not to give us the first one and then Woody gets impeded for the second one, no penalty. Ryan Bertrand has a handball, no penalty. So we do struggle to get penalties.

“I’m a big fan of VAR and I think it will get better. But they are ones you do scratch your head at.”

The visitors made a blistering start in the south coast sunshine and were rewarded when, with assistance from VAR, referee Andre Marriner pointed to the spot following Kyle Walker-Peters’ lunge on Erik Pieters.

Wood confidently dispatched the spot-kick down the centre of the goal, before nodding into the path of strike partner Vydra for the 28th-minute second.

But the promising position quickly unravelled as Armstrong denied the Clarets any time to settle on the two-goal lead by sweeping home.

Ings, back from a month-long injury absence, then seized on a mistake from Ben Mee to cut inside James Tarkowski and equalise before the break and Redmond completed the turnaround for FA Cup semi-finalists Southampton by volleying in Theo Walcott’s centre 24 minutes from time.

Victory was only a second in 13 top-flight outings for Saints and secured a first league double over Burnley since 1971.

Southampton boss Ralph Hasenhuttl hailed the dramatic comeback an “important step” in the battle for survival but is unsure if it will be sufficient to guarantee safety.

His side’s first top-flight success on home soil since upsetting champions Liverpool on January 4 moves them on to 36 points – three points above their opponents – with eight games remaining.

“Every win you need and this one was not really expected after being two down, for anybody,” said the Austrian.

“We showed the things we were working on in the last two weeks and the guys created a lot chances today against a team that don’t normally give you a lot.

“I think to turn the table around against this side when you are 2-0 down, not a lot of teams have managed this in the past. They have an amazing record when they go one up.

“It was important to make the equaliser before half-time and in the second half we tried to keep the tempo high and then it was a very deserved win. We had some really good chances to make it higher.

“I don’t know (if it means Southampton are safe) but it was an important step against an opponent that was on the same level like you have been.

“If you lose this today then they are gone and now we have three points more than they have. It was a six-pointer and we took it and it was important.”