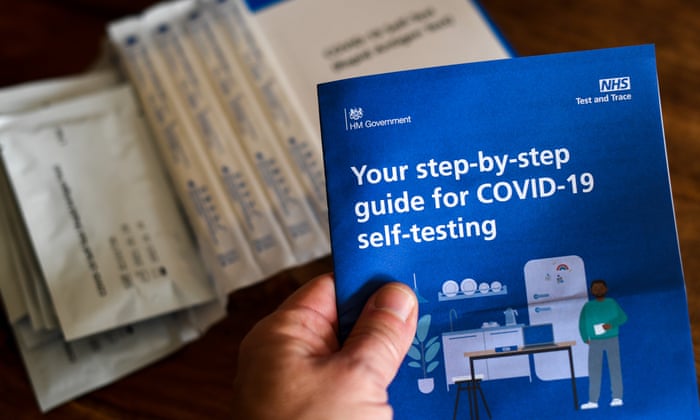 The UK government is planning to roll out millions of free rapid Covid tests, twice-weekly, for everyone in England to detect more cases, break chains of transmission and save lives.

But experts warn the rapid tests being used are unreliable. And focusing on testing, without improving contact-tracing and financial support for self-isolation, is “like pouring water into a bucket which has got a hole in the bottom”, said Prof Stephen Reicher, a member of the Sage subcommittee that advises the government on behavioural science.

How do rapid tests work?

Lateral flow tests (LFTs) – also called rapid tests – look for proteins on the surface of the virus that causes Covid-19 to ascertain the presence of the pathogen. They differ from gold-standard polymerase chain reaction (PCR) tests, which are engineered to find genetic material called RNA that instructs the virus to make these proteins. LFTs do not detect which variant of Covid-19 an infected person has.

Both tests require a swab from the back of your nose or throat. In the case of PCR, the sample is sent to a lab for processing and analysis by technicians and the results are very accurate. In contrast, rapid tests don’t need a lab and typically offer results in 30 minutes or less, but that speed comes at the cost of sensitivity and specificity – the ability to detect disease or the absence of disease.

Just how reliable are rapid tests?

According to the Department of Health and Social Care (DHSC), analyses from NHS test and trace show that for every 1,000 lateral flow tests carried out there is less than one false positive result.

However, according to Jon Deeks, a professor of biostatistics at the University of Birmingham, among 10,000 people with a prevalence rate of 0.5% you would expect 50 people to have Covid. Innova tests – the lateral flow tests used by the UK government – would pick up 35 of the 50, but 90 would wrongly be told they were infected.

A review of LFTs carried out by international experts suggested the test’s brand played a key role. In people with symptoms, SD Biosensor, which has been approved by the World Health Organization, picked up 88% of infections while the Innova test picked up 58%.

The reliability of Innova tests also depends on who administers them. When they were initially piloted in Liverpool last year, scientists found that in a population of mostly people with symptoms, the test’s sensitivity fell to about 58% when administered by self-trained staff versus 79% when tested by laboratory scientists. In a study that looked at people without symptoms, sensitivity fell to roughly 49% versus PCR tests.

How do experts weigh up the pros and cons?

There’s the issue of false positives, false negatives and whether people who do test positive will self-isolate, said Paul Hunter, a professor in medicine at the University of East Anglia. “There will be some benefit there … but whether that benefit is sufficient is the question.”

LFTs are best used as a screening tool for people at high risk of catching Covid, with positive results followed up by PCR tests and financial support, said Susan Michie, a member of the Sage subcommittee advising on behavioural science. But she warned: “There is a real concern that if people use lateral flow tests as a confirmatory test then they may be counterproductive as people may be less careful with their behaviour than if they had not taken the test at all.”

How do I get a rapid test?

Your best bet is to visit www.nhs.uk/get-tested to get a test from 9 April. If testing at home, individuals will need to register their results online or by calling 119. Anyone who has a positive result has to self-isolate for 10 days.

What should I do if I get a positive rapid test result – and can it be overridden by a negative PCR test?

After a positive rapid test result, people should get a PCR test within two days at the latest, online or via 119, the Department of Health said. If the PCR test is negative, it will override the positive rapid result, and the person no longer has to self-isolate. If they don’t do a PCR test within that timeframe, they should self-isolate in line with the original rapid test result.

Will rapid tests be used for so-called Covid passports, or certificates, in future?

A certification review of rapid tests is taking place. The prime minister has already said the government is looking at granting access to certain venues following a vaccine, evidence of antibodies or a positive test (without stipulating which type).

But given the dangers of false reassurance and more risky behaviour after receiving negative results, and the chance of false positives, considering LFTs as part of a certification or “passport” process for entry to venues would be very problematic, Michie said.

Jordan prince says he was placed under house arrest