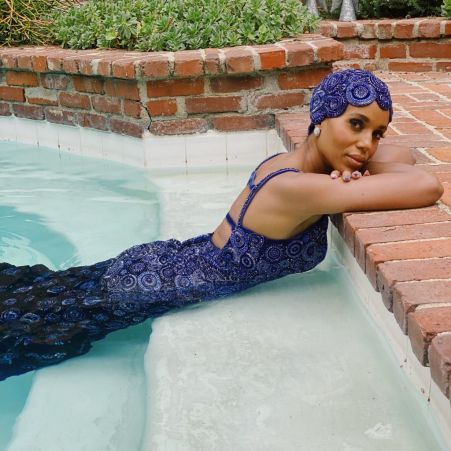 Kerry Washington posed in her swimming pool on Instagram

Celebrities dressed to impress at home for the virtual Screen Actors Guild Awards.

For the latest major awards show to take place without a red carpet, stars got dressed up wherever they were in the world and shared their outfits on social media before the pre-taped ceremony aired in the US.

The 25-year-old – who wore her hair in a 90s-inpired curtain look – thanked Prada for her “divine” outfit.

Kerry Washington was nominated for her role in Little Fires Everywhere.

She channelled the 1920s for her at-home SAG Awards outfit, wearing a beaded, bright blue gown with a matching headpiece.

Washington posed in her swimming pool on Instagram, adding the hashtag #MermaidVibesAlways.

Kaley Cuoco was nominated for her comedy turn in The Flight Attendant.

She also posed near her swimming pool, wearing a hot pink off-the-shoulder gown with eye-catching floral details on the bust.

It was not only the nominees who were getting dressed up.

Mindy Kaling was a presenter during the ceremony and wore a royal blue, floor-length gown for the occasion.

Actress Jamie Chung made a political statement with her SAG Awards look.

The US actress, who is of Korean descent, wore a bright red Oscar de la Renta gown, explaining in many Asian cultures, “the colour red symbolises joy, luck and happiness”.

In response to the wave of violence against Asian people in America, Chung held up a crimson-coloured handbag bearing the slogan “Stop Asian Hate”.

The Crown’s Gillian Anderson – nominated for her portrayal of Margaret Thatcher – teased her red gown on her Instagram Story.

She earlier posed in a much less glamorous look of bathrobe and boots.

Josh O’Connor, nominated for playing the Prince of Wales in The Crown, looked dapper in a brown suit.

And Schitt’s Creek star Dan Levy posed in his “custom cream dream” suit ahead of the ceremony.

How to grow new vegetables from kitchen scraps

Work from home stress forcing people to venture out