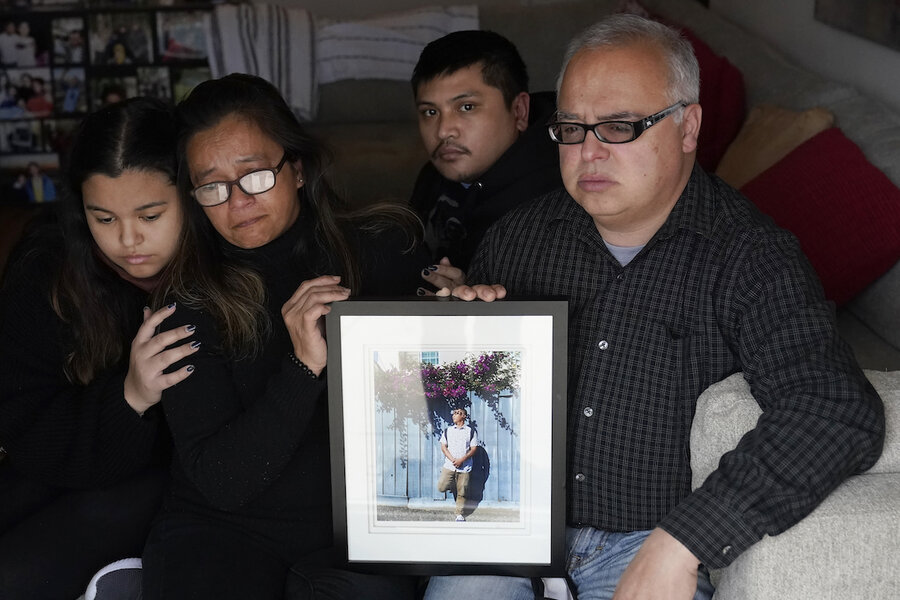 The officer who Cassandra Quinto-Collins says kneeled on her son’s neck for over four minutes assured her it was standard protocol for sedating a person experiencing a mental breakdown.

“I was there watching it the whole time,” Ms. Quinto-Collins told The Associated Press. “I just trusted that they knew what they were doing.”

Angelo Quinto’s sister had called 911 for help calming him down during an episode of paranoia on Dec. 23. His family says Mr. Quinto didn’t resist the Antioch, California, officers – one who pushed his knee on the back of his neck, and another who restrained his legs – and the only noise he made was when he twice cried out, “Please don’t kill me.”

The officers replied, “We’re not going to kill you,” the family said. Police deny putting pressure on his neck. Three days later, the Navy veteran and Filipino immigrant died at a hospital.

The proposals lean heavily on additional training for officers on how to interact with people with mental health problems. It’s a common response when lawmakers face widespread outcry over police brutality like the United States saw last year following the death of George Floyd in Minneapolis. But none of the proposals appear to address the root question: Should police be the ones responding when someone is mentally ill?

In California, lawmakers introduced legislation on Feb. 11 that, among other things, would require prospective officers to complete college courses that address mental health, social services, and psychology, without requiring a degree.

In New York, lawmakers in January proposed an effort to require law enforcement to complete a minimum of 32 credit hours of training that would include techniques on de-escalation and interacting with people who have mental health issues.

The proposal came nearly a year after Rochester, New York, officers put a spit hood over Daniel Prude’s head and pressed his naked body against the street until he stopped breathing. The victim’s family, like Mr. Quinto’s, said they had called 911 for help after Mr. Prude, who is Black, began having a mental health episode.

Similarly, in Utah, the mother of 13-year-old Linden Cameron called 911 in September because he was having a breakdown and she needed help from a crisis intervention officer. Salt Lake City police ended up shooting him multiple times as he ran away because they believed he made threats involving a weapon.

He was hospitalized, and no weapon was found. The officers were not crisis intervention specialists but had some mental health training.

At least 34 states already require officers to have training or other education on interacting with people who have physical or mental health conditions. But law enforcement experts say updated training is needed and agencies are far behind.

“The training that police have received for the past I’d say 25 years has not changed significantly, and it’s out of date, and it doesn’t meet today’s realities,” said Chuck Wexler, executive director of the Police Executive Research Forum, a Washington-based think tank. “I mean the last thing a mother wants when they call the police is for an officer to use force. Especially in a situation that didn’t call for it because the officers weren’t trained in how to recognize a crisis.”

Some of the new legislation looks to strengthen or improve standards. But because mental health training is a mandate in a majority of states, some advocates and experts believe it may never fully prepare officers on how to respond.

The Treatment Advocacy Center, a nonprofit dedicated to getting treatment for the mentally ill, concluded in a 2015 report those with untreated mental illness are 16 times more likely to be killed during a police encounter than others.

“The solution that would have the most impact on the problem is to prevent people with mental illness from encountering law enforcement in the first place,” said Elizabeth Sinclair Hancq, co-author of the report.

Since that is not always possible, she said, another solution is to create co-responder programs where a social worker or other mental health professional assists officers on such calls.

That is what Philadelphia introduced in October, weeks before officers fatally shot Walter Wallace Jr., a Black man, within a minute of arriving at his address for the third time in a day while he was having a mental health crisis. Police said Mr. Wallace ignored commands to drop a knife.

Other cities, including Los Angeles, San Francisco, and Portland, Oregon, have similar programs.

For families of victims, who now say they regret calling 911 for help, required training and legislative reform are long overdue.

“In retrospect, it wasn’t the smartest idea to call the police,” said Isabella Collins, the teenage sister of Mr. Quinto, who died in California. “But I just wanted him to be able to calm down, and I thought that they could help with that.”

Antioch police didn’t release details of Mr. Quinto’s death for more than a month. Police Chief Tammany Brooks has denied that officers used a knee or anything else to put pressure on Mr. Quinto’s head, neck, or throat. An investigation and autopsy are underway.

The department didn’t respond to a request for comment.

Mr. Quinto’s family filed a wrongful-death claim against the city in February, claiming he “died as a direct consequence of the unreasonable force used against him.”

“I guess it was really naive of me to think that he wouldn’t get hurt,” Ms. Collins said.

Matt Gaetz and the tyranny of the backbencher