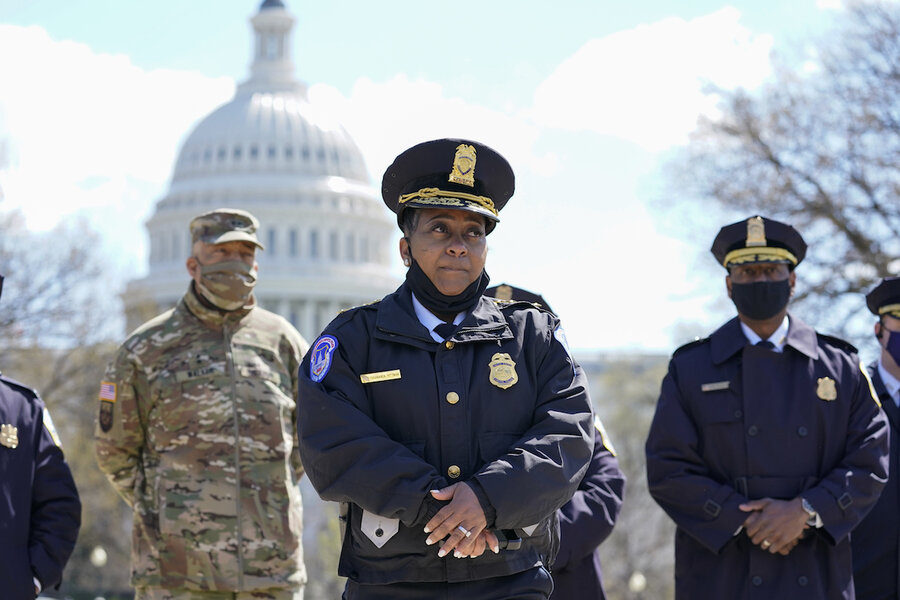 One officer was killed and another injured when a driver slammed into them at a barricade Friday afternoon. The attack comes after officers were overrun and injured when a violent mob of Trump supporters overran the Capitol on Jan. 6, breaking through insufficient barriers and pushing their way to within steps of lawmakers. One officer died and another killed himself.

Scores of officers are considering early retirement, top leaders have resigned, and those in office face increasing criticism. Security concerns over the events of the past four months may alter not only how the department operates, but also whether the historically public grounds can remain open.

The head of the Capitol Police union said officers are “reeling” following the death on Friday of Officer Billy Evans, who was on the force for 18 years. He was struck at a Capitol entrance by a man who, according to investigators, suffered from delusions and suicidal thoughts.

Mr. Evans’ death comes after Officer Brian Sicknick, who was among hundreds of officers trying to fight off rioters without the necessary equipment or planning, died following the Jan. 6 riot. Officer Howard Liebengood died by suicide shortly afterward.

Hundreds of officers are considering retirement or finding jobs elsewhere, union chair Gus Papathanasiou said in a statement. “They continue to work even as we rapidly approach a crisis in morale and force numbers,” he said, noting that officers are dealing with “massive amounts of forced overtime.”

Dozens of officers were injured on Jan. 6 and others have been held out of work during an internal investigation into the department’s response, including the officer who fatally shot a woman attempting to climb through a broken window as she and others massed at a barricaded doorway. That’s further depleted a force that has more than 200 vacant positions, roughly 10% of its authorized force level.

In the months since the insurrection, many officers have routinely worked 12-hour days or longer to protect the building during President Joe Biden’s Jan. 20 inauguration and impeachment proceedings against former President Donald Trump.

“This … [attack] continues to provide a level of uncertainty and worry about the workplace and what’s happening there,” said Rep. Tim Ryan, an Ohio Democrat who chairs a subcommittee overseeing Capitol Police funding. “And I think this is very personal for so many of us who have come to really love and respect the Capitol Police even more than we already had, because of what they did on Jan. 6, and then immediately turning it around to make sure that the inauguration was safe.”

Acting Chief Yogananda Pittman received a vote of no confidence from the union in February, reflecting widespread distrust among the rank and file. Ms. Pittman was assistant chief in charge of intelligence during the riot and has admitted she did not see an FBI assessment the day before warning of “war” at the Capitol.

Steven Sund, who resigned in January as the agency’s chief amid scrutiny over whether the police force was adequately prepared for the riot, told The Associated Press that officers he had spoken to were “on edge.”

The grief and crises that have engulfed the Capitol Police are also part of broader social forces that have tested the country, Mr. Sund said.

“There’s the impact of the pandemic on the American psyche,” Mr. Sund said. “There’s a lot of stuff in social media and a lot of action in reference to the actions of law enforcement. Law enforcement have been attacked in cities around the country. So there’s just a lot of things gearing up that make 2020, 2021 a little unique.”

The Capitol Police are not a typical law enforcement agency. The roughly 2,000 officers are responsible solely for protecting Congress – its members, visitors, and facilities, an area of about 16 acres.

The department dates back to the early 1800s, after President John Quincy Adams asked that a police force be established to help protect the building following incidents there. Now they have an operating budget of $460 million.

The driver in Friday’s incident, Noah Green, was shot by officers shortly after emerging from the vehicle wielding a knife, authorities said. Mr. Green died later at a hospital. There is no known connection between the insurrection and Mr. Green, who described himself in online posts as being under government thought control and being watched.

New concrete barriers are in place around the checkpoint where Mr. Evans and a colleague were standing guard north of the Capitol. But the attack underscores that the Capitol will always be a target, said retired Lt. Gen. Russel Honoré, who chaired a task force that made several security recommendations following the insurrection.

“It is the most important building in America, because it’s the seat of our democracy,” Lt. Honoré told ABC’s “This Week” on Sunday. “If that building and the people in it don’t function, we no longer have democracy. And whatever price we have to pay to protect it, we need to do it.”

The task force called for a renewed push to fill the 233 open positions on the force and for Congress to fund 350 new jobs and new fencing systems and other infrastructure. The task force also wants Congress to give the Capitol Police chief new authority to seek National Guard support in a crisis. Mr. Sund has alleged that leaders on the three-member Capitol Police Board delayed his calls for Guard help on Jan. 6, which former members of the board have denied.

Mr. Papathanasiou, the union chair, said he supported Lt. Honoré’s recommendations and had met with him and his team Thursday, the day before Mr. Evans’ death.

“As I explained to him, these improvements are critical, but our first priority has to be retaining our existing officers,” Mr. Papathanasiou said. “There are immediate steps Congress can take to address this.”

Rep. Jennifer Wexton, a Virginia Democrat, has been in touch with Mr. Liebengood’s family since his death. She called for a program to encourage “peer-to-peer” discussions between officers about the trauma they had incurred separate from mental health professionals called in to meet with officers.