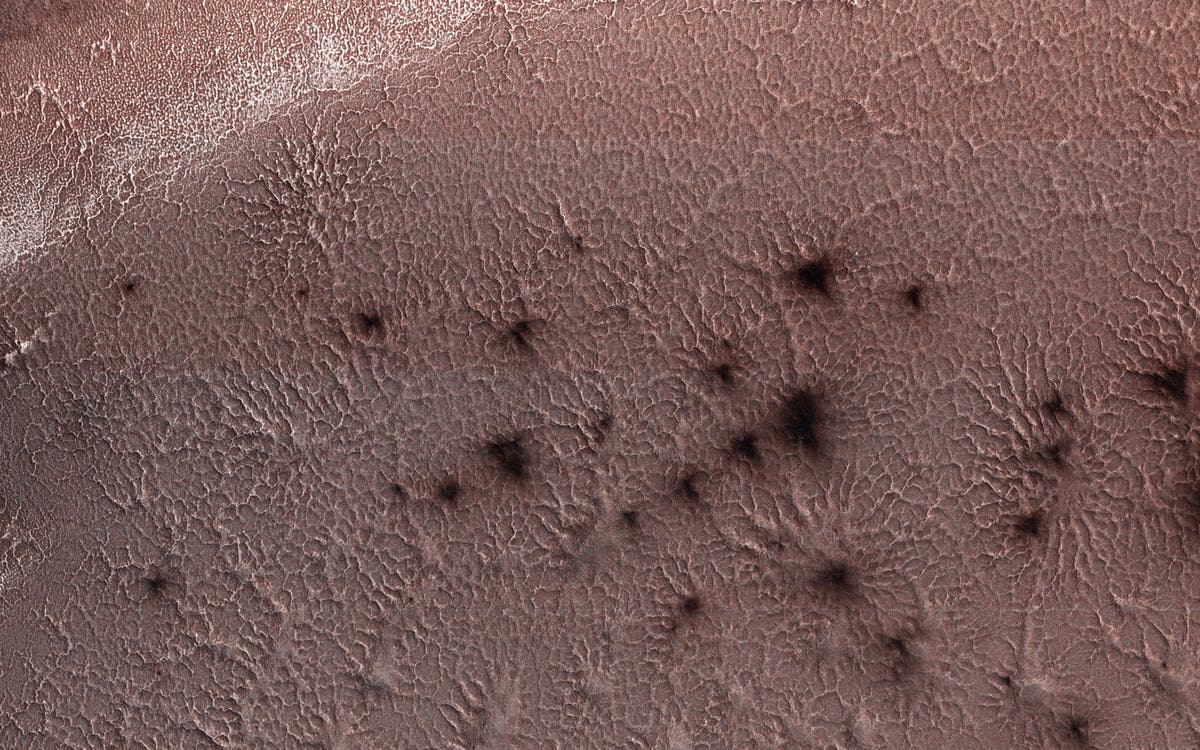 Scientists have made a breakthrough in explaining the “spiders from Mars”.

The phenomenon occurs when black arachnid-looking splodges appear on the surface of the red planet. Officially they are referred to as “araneiforms”, and they are made up of troughs on the surface.

They are not found on Earth, and the reason they form on Mars has remained a mystery.

Scientists have now found new physical evidence that they can be explained through the sublimation of CO2 ice. They appear to be carvved into the surface when dry ice changes from solid to gas ni the Martian spring.

Researchers from across the UK and Ireland showed that the effect could happen by using the Open University Mars Simulation Chamber. That allowed them to recreate the conditions on the red planet, and find whether similar patterns would form through that sublimation.

They took pieces of CO2 ice blocks, drilled holes in them, and held them up like a prize that has been captured at an arcade. They were hovered over beds of different sizes of grain, before the pressure in the chamber was lowered to that on Mars and the blocks were placed down onto the recreation of the surface.

The blocks of CO2 then sublimated, or turned directly from solid to gas, and the material came up through the hole. When they lifted the block away, they saw that a similar spider pattern had been carved out by the gas as it left.

Scientists think that this process is explained on Mars by what they refer to as Kieffer’s hypothesis: when spring arrives, sunlight shines through the ice and heats the ground beneath, leading the ice to sublimate and cause pressure underneath, which will eventually escape through cracks. As the gas escapes, it leaves behind the patterns and the material will be left on top of the ice.

It represents the first “empirical evidence for a surface process that is thought to modify the polar landscape on Mars”, said Lauren McKeown, who led the work during a PhD at Trinity College Dublin. While the theory behind the process has been accepted for more than a decade, it has also remained theoretical, with no real physical proof.

“The experiments show directly that the spider patterns we observe on Mars from orbit can be carved by the direct conversion of dry ice from solid to gas,” said Dr McKeown. “It is exciting because we are beginning to understand more about how the surface of Mars is changing seasonally today.”

The findings are published in a new paper in the journal Scientific Reports.