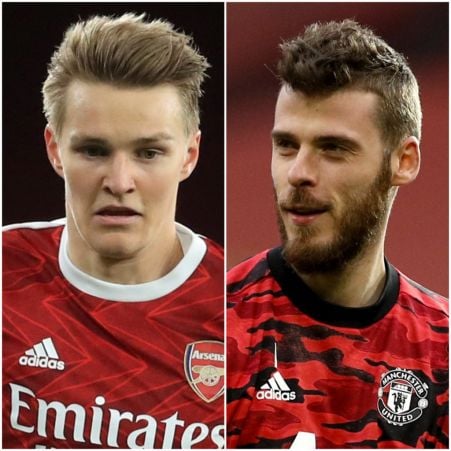 David De Gea is on his way out of Old Trafford and has been offered to a range of top European clubs, writes the Daily Mail. The paper said Dean Henderson will be the first choice goalkeeper at Manchester United and Paris St Germain, Real Madrid and Atletico Madrid will all be interested in bringing in the Spain international.

Martin Odegaard could be tempted away from Real Madrid if Liverpool came knocking, according to the Sun. The Norwegian is on loan at Arsenal having only made eight appearances for the Spanish giants since joining in 2015.

Manchester City could look to Romelu Lukaku to replace Sergio Aguero, writes the Sun. Aguero will be leaving the Etihad in June and the paper carries reports from Italy suggesting the Inter Milan striker is on City’s wishlist.

West Ham have been offered Vitolo, who has struggled for game time at Atletico Madrid, as a potential replacement for on-loan midfielder Jesse Lingard, the Sun says.

Chelsea, Arsenal and Juventus are all interested in Hakan Calhanoglu, the Daily Mirror says. The Turkish midfielder’s deal at AC Milan expires in the summer and he is yet to sign a new deal.

Borussia Dortmund's transfer chief insists the club are NOT planning on selling Erling Haaland this summer – but an exceptional offer for Jadon Sancho could tempt them into sellinghttps://t.co/82zkHM2dRh

Lionel Messi: Manchester City are said to be in front of Paris St Germain in the race to sign the 33-year-old, with the Argentinian attracted by the Premier League’s competitiveness says Mundo Deportivo.

Achraf Hakimi: Arsenal are keen on bringing in the Inter Milan full-back over the summer, writes AS.

Hector Bellerin: The Gunners’ interest in Hakimi has been brought about after rumours suggesting right-back Bellerin could be heading to either Barcelona or Paris St Germain, says the Sun.

I am excited to start a new chapter of my life: Gagan Narang