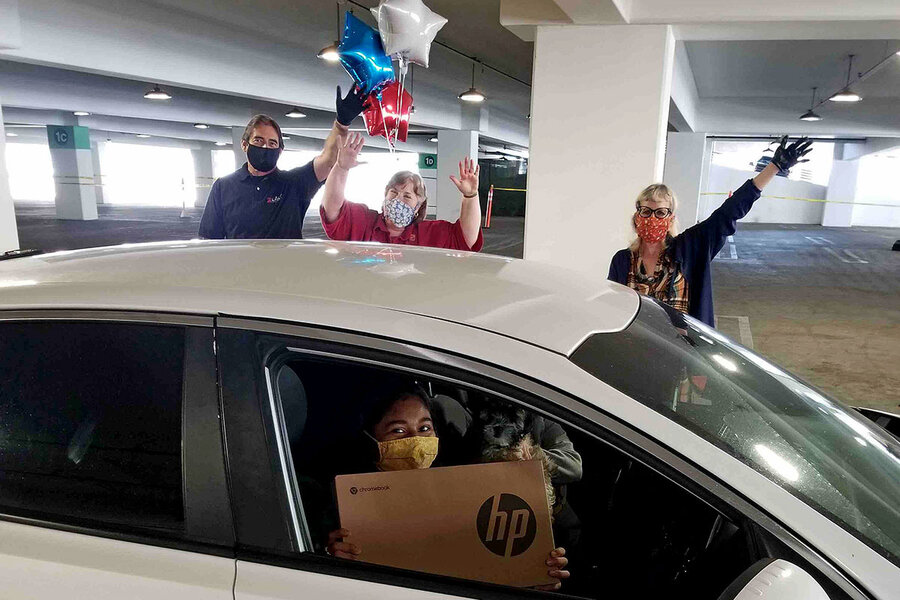 The numbers caused concern: 6,000 students who’d registered for fall and winter classes weren’t signed up for spring. It was January, and Los Angeles City College hoped to teach more than twice that number of students starting the following month.

So the school recruited more than 100 volunteers – half faculty – to call them. Not just about registration, but for a check-in.

“Once they realize somebody from LA City College is calling them, they’re actually very thankful and relieved,” says Armineh Dereghishian, acting dean of outreach and student life.

Community college enrollment took a bigger blow than higher ed overall this school year. But as these schools continued the work of enriching lives, some honed strategies for better serving – and retaining – students.

A similar effort last March saw staff following up with each student over a call, text, and email when the college turned remote. Both campaigns paid off: She says the concerted outreach “directly contributed” to retaining nearly all of last year’s student head count.

Community college enrollment saw the steepest decline in higher ed overall during the pandemic, though these schools serve as pipelines to pandemic-essential jobs. Administrators cite an array of strategies for keeping their mission afloat, including heightened communication, expanded affordability, and digital improvements. They say their desire to keep students committed is rooted in a spirit of solidarity.

“It’s reminded us of why we’re really here,” says Dr. Dereghishian of the team effort. “We’re here for the students and to help them succeed.”

A hit to higher ed

Community colleges are called the “nation’s best-kept secret” by Secretary of Education Miguel Cardona. They offer affordable paths to careers like health care, manufacturing, and information technology, as well as transfer opportunities to other degrees. Enrollment typically refers to credit-enrolled students, though community colleges also serve many noncredit students.

“If you think about the role of community colleges in particular, so much of what they train people for are really essential jobs for the functioning of our communities,” says Thomas Brock, director of the Community College Research Center at Teachers College, Columbia University, where he is also a research professor.

Though enrollment at these schools swelled following the 2008 recession, that’s so far not the case for the latest economic downturn.

If students skip postsecondary education, they’re at a “long-term disadvantage” in terms of their economic prospects, says Dr. Brock.

An analysis of fall census data he co-wrote surveyed households with at least one member with higher ed plans. A third of community college households cited virus-related concerns as the reason their plans changed, and nearly the same share (31%) said affordability or changes to financial aid influenced their decision. Both shares were higher than that of four-year college households.

Federal support may be in store. The American Jobs Plan announced by the White House March 31 proposes $12 billion for infrastructure upgrades at community colleges and for addressing access to these schools in “education deserts.”

An additional proposal this spring could include free community college, The New York Times reports.

“We’re very excited about that conversation, because we could see how important it was to our students this year,” says President Sandra Kurtinitis of Community College of Baltimore County in Maryland (CCBC).

It’s difficult to determine what caused certain community colleges to maintain – or even increase – student head counts this fall. Dr. Kurtinitis credits enrollment retention at her school in part due to expanded affordability.

CCBC, primarily serving white and Black students, pooled around $35 million in federal, state, and college funds to offset the cost of attendance through merit and need-based scholarships. That helped attract students like Shannon Hughes.

Following a layoff last spring, she relied on unemployment checks that didn’t always arrive. Job loss forced the master electrician to reflect on how to progress in the trade she loves, which she entered in 2007 after a few years in the military and warehouse work.

She’d long wanted to attend college, but says the cost and self-doubt helped hold her back. Without her scholarship at CCBC, Mrs. Hughes says she likely wouldn’t have enrolled. She loves the school – especially English 101.

“With every class that I take and everything that I learn, I’m just grateful,” she says.

While fall 2020 saw a 2% dip in enrollment compared with fall 2019, the 17,598 head count exceeded projections this school year, says the president. And it left budget room for staff bonuses.

A fifth of fall instruction remained on-site for students, an option that Dr. Kurtinitis says also gave CCBC “an edge” over campuses that remained remote.

“We just kept saying: Online, in the seat – whichever you need – you come to us, and we’re going to help you make sure you can pay for it,” she says.

Community colleges can improve information-sharing during the pandemic, an analysis of roughly 5,000 students enrolled last fall found. When asked if their schools offered support services to help with pandemic-related stress, 57% said they didn’t know.

Schools should be “tapping into all channels to communicate and connect to these students” to rectify such information gaps, says Linda García, executive director of the Center for Community College Student Engagement at the University of Texas at Austin, which published the report.

Since last spring, says Dr. Gallagher, “I needed to communicate a lot so that people had confidence in being able to get information,” even when information was limited.

The virtual campus launched frequent remote town halls, a centralized hotline, and counselor outreach that spanned multiple platforms. The welcome center, which triages calls from both prospective and current students, connects callers to resources as varied as free food and learning devices. Over half of the 14,000-plus, credit-student population is Hispanic/Latino, and most qualify for reduced fees.

Though the head count declined by a few hundred students this term since last fall, this is typical for schools in normal school years, too, says Dr. Brock.

In Texas, San Antonio College, which is around two-thirds Hispanic, saw a 1% enrollment decline this school year, down to 19,231 students. An expanded tuition-free program that recruits from local high schools, handing out laptops and hot spots, and expanded student services helped, says President Robert Vela.

“One of the things that we want to ensure is that students are safer and better off with us than not enrolled,” he says.

As part of a “new normal,” the community college will likely offer a blend of in-person and online education in the future.

While the college marketed its affordability and ability to offer some classes in person, it also streamlined the onboarding process. Until last spring, students had to complete an in-person orientation before registering for classes.

“We had been talking about developing an online orientation for years,” says Dr. Smith, but the pandemic forced them to commit.

Exploring new solutions to old systems took a team effort. On campus, he says, there’s a sense that everyone is “all in this together, and we’re going to get through it.”

Parents cheer news that Pfizer vaccine is safe for kids, but not everybody is convinced