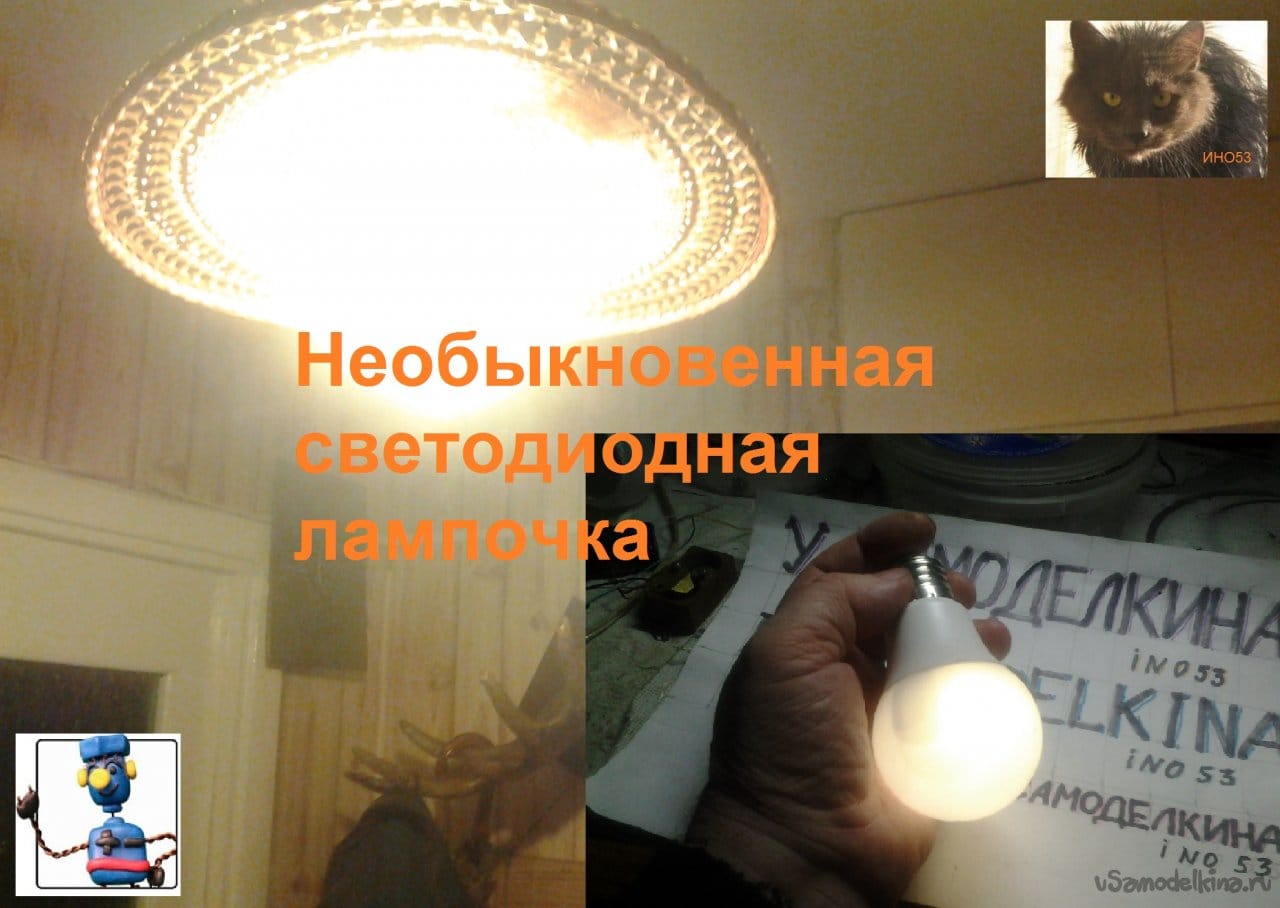 I'll start from afar. One former student comes to me, smart, successful, arrogant self-confident. He needed one old piece of iron – a transformer. I am showing the place – choose here. Dark. I turn on the light, the light is hanging to the side, it's still dark. Eh you … I turn off and unscrew the light bulb, bring it to the right place and it lights up.

He chooses a suitable trance, the light goes out, I give it to him – on, wrap it in place. His eyes are six kopecks each, with three fingers he carefully takes the light bulb, turns it over, flips the switch – it lights up! She tries to ask: How is that? … I kick out unceremoniously – Vali, my soup is getting cold! In the evening, several calls from former students, serious guys, electronics specialists – what is this dunce again invented? I called everyone … Having laughed, we set a meeting as usual, on Radio Day. So what's the point? The LED light bulb, in appearance, is ordinary, and shines in the cartridge as usual, but it also lights up in the hands at the right time like a flashlight.
There is nothing complicated here. Consider the circuit of a 230 V LED light bulb with a capacitor driver. 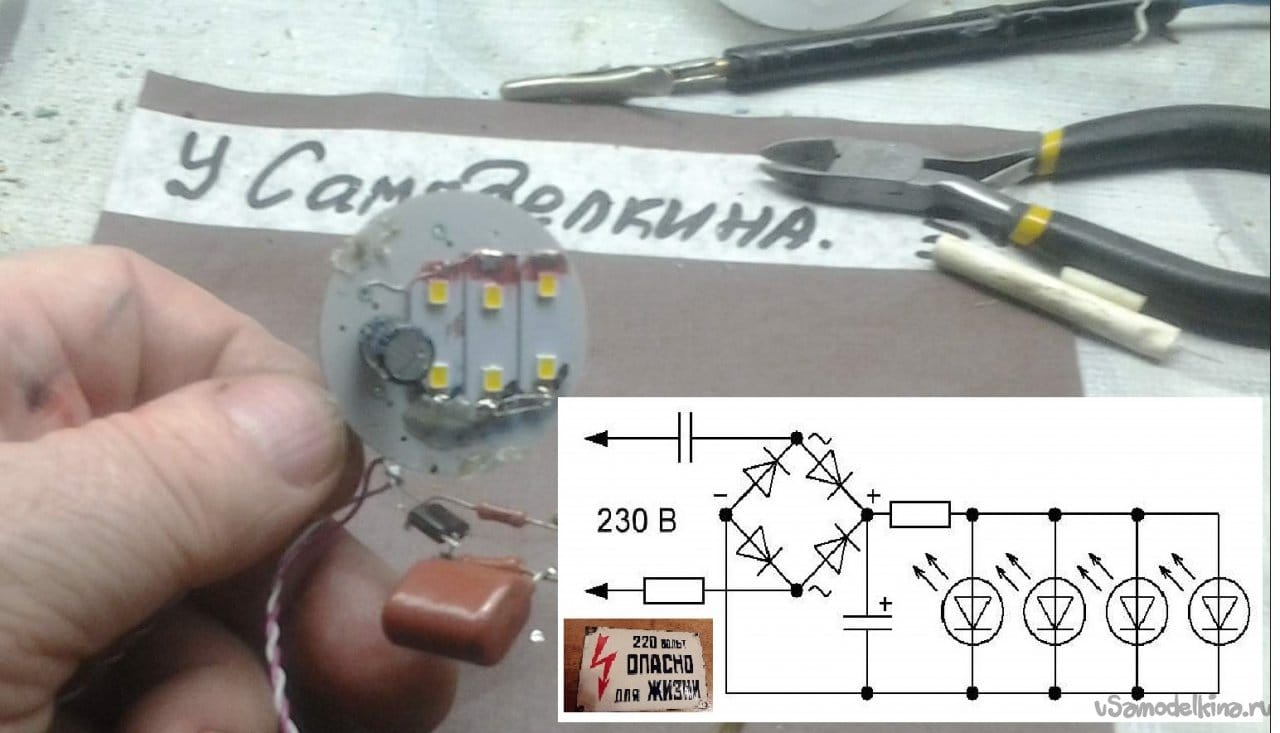 A typical circuit, only the LEDs are not connected in series, but in parallel, of course, the capacity of the quenching capacitor must be greater to increase the supplied current. (The bar with LEDs is taken from the luminaire, where they stand 4 pcs. In parallel in the standard factory connection. The spread of their parameters is most likely minimal. In reality, there are 6 LEDs installed.)
Now let's look at the LED control circuit using a key in the field transistor.
Also straight from the ABC book … The LEDs are the same. Let's redraw this scheme a little, so that it would be easier to dock it with the very first scheme.
On the left of the diagram, instead of a button, there are sensor contacts. To work with them, those people who have a high electrical resistance of the skin, in order to reduce it (resistance), need to drink vodka, (they say, it helps) well, or just slobber your fingers. Film And finally, the general scheme.
The diode near the field-effect transistor is shown conditionally, it is a parasitic diode in the structure of the transistor itself. The transistor itself must have the letter L in the designation, i.e. must be controlled by logic levels (“0” – 0 … 0.4 V, “1” – 2.4 V and more, ie at 2.4 V at the gate it is guaranteed to be fully open). Accumulators D-0.125, in the amount of 3.6 V, when charging up to 4.4 V. I tried first ionistors K50-8a 0.047F * 2.5V 2 pcs., Quickly discharged. Protective Zener diode VD4 must have low leakage currents. Delivered at the beginning of prototyping sequentially 2 pcs. KS133 had to be changed to 2S156. The capacitance of the capacitor C4 (0.05 μF) is selected so that it removes the change on the gate when it is connected to the network and at the same time does not slow down the reaction to the finger too much in offline mode. Zener diode VD3 – KS447 with a tolerance in minus.
Next came uninteresting technical details about how it was done. 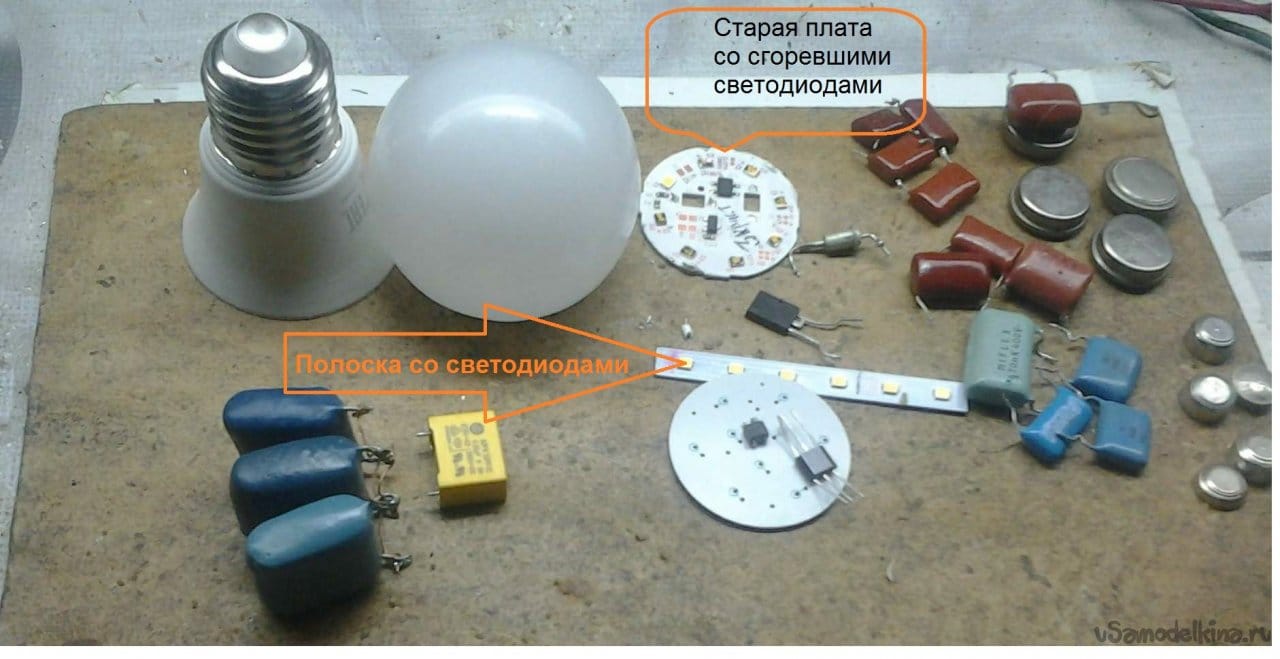 Selection of components and boards.

We will adapt to the existing tracks.

The strip with LEDs was cut into 3 parts, all connected in parallel. It did not work with supercapacitors, we will put D-0.125.

possible contamination and, together with the leads, we tightly twist it with tape. The voltage is within normal limits. 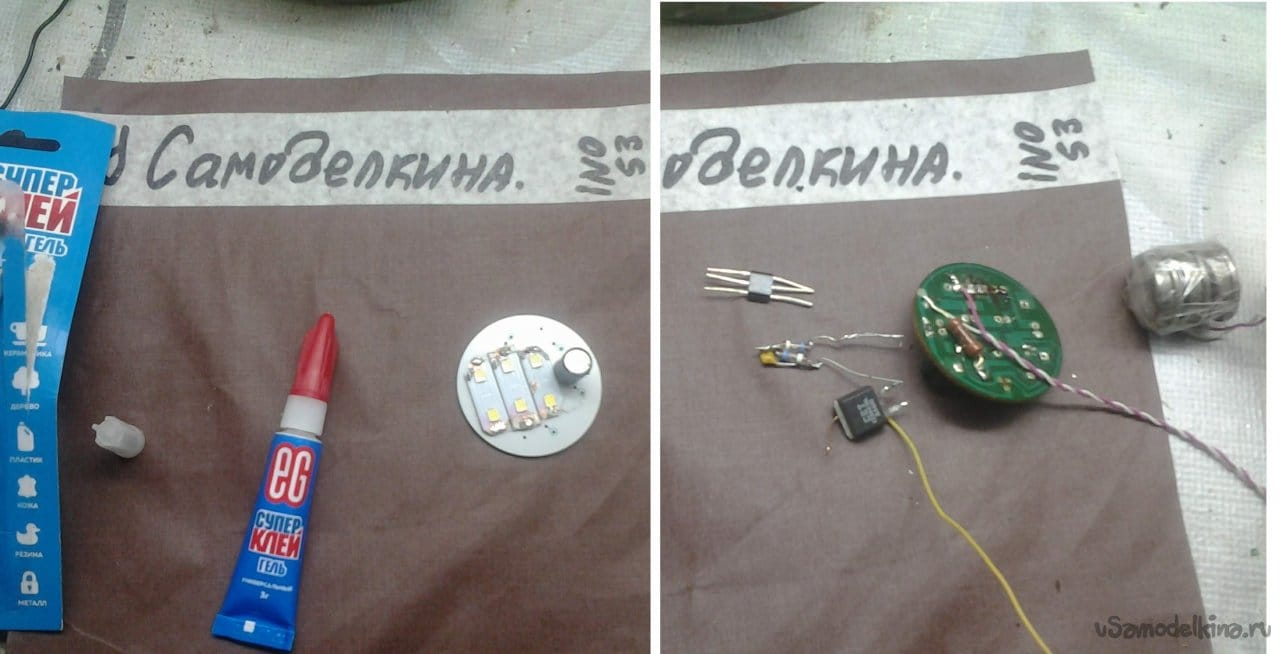 Will it hold hot-melt glue strip with LEDs in conditions of non-weak heating with prolonged switching on is unknown, so it's better to drop a little superglue. Polevik from the old motherboard.
We solder the wires to the base instead of the sensor, try it – it works!

We solder and isolate the circuit of the key from a field driver, a protective zener diode, resistors and a capacitor into the most dense lump, there is catastrophically little space in the case. Working again …

the shadow from the capacitor is visible. What to do, there is not enough space inside the case … A lot of space was taken by the details of the network driver, the photo is below, here it is being checked, not yet isolated.

Like a network light This product, of course, is rather weak, about 2 W, but it makes an impression as a flashlight. And for testing free energy sources, this is generally a beauty!
Time spent on work is not a pity, you cannot buy such a toy (this is the Queen).

How to make a multi-turn potentiometer from a single turn

How to make “vertical” goats

Motivating device for pull-ups on the horizontal bar