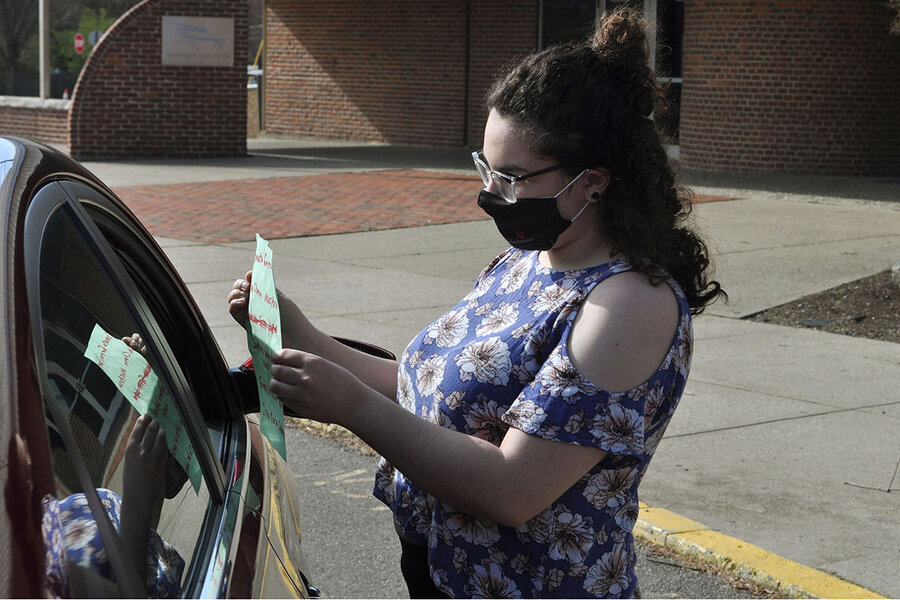 It’s 5 p.m. on a Tuesday, and Cathy McNair and a few student volunteers are ready to go. They’ve wheeled out a couple dozen boxes of pre-packaged meals – some donated and some from the school’s food services provider – to the Finneytown Secondary Campus parking lot in suburban Cincinnati.

Ms. McNair, the school social worker, and her team set up shop multiple times a week to hand out free school meals to anyone who wants them. Parents pull up, drive-thru style, to maintain social distancing.

Long involved in fighting childhood hunger, public schools are providing free meals this year – regardless of family income. The unplanned experiment offers clues about what works. Third in a series about hunger in America.

“I love it. I absolutely love it,” says Christina, a mother of four, who asks that her last name be withheld in order to feel comfortable talking about her family’s financial situation. Without the meals, she says, “it would be a lot more stressful. A lot more of me monitoring – ‘Alright, you can have this much milk today.’”

Despite myriad programs – free and reduced-price school breakfasts, lunches, and after-school meals, as well as benefits like SNAP (formerly known as food stamps) – 11 million children in the United States lived in “food insecure” homes before the COVID-19 pandemic, according to the advocacy group No Kid Hungry. Amid predictions that number could reach 18 million during the pandemic, restrictions on how poor a family had to be to qualify for free school meals were lifted – opening up the program to all.

Since March 2020, schools across the country have been ground zero in a massive, accidental experiment in universal free meals.

The results aren’t perfect, advocates say, but it’s opened up new ground in a debate on how to make sure each American child has enough to eat every day.

As a result of the expansion of the meal programs, advocates say, working poor people can now get the help they need, and families don’t feel singled out for receiving free meals. After more than a year under this temporary system, some are seeing a new, permanent path emerging for universal free school meals.

Others see a new entitlement creeping up in place of a targeted poverty-reduction program and want to return to the previous system if the expansion expires in September as planned. In the meantime, all public school children – in one of the world’s wealthiest nations – are for the first time experiencing equal access to food, no questions asked.

“Personally, I think it would be great if we had food, and if kids wanted food, they got food,” says Ms. McNair. At the Tuesday meal distribution, she spots a student leaving an extracurricular activity and asks if he wants a meal. He hesitates at first, but takes one. Without missing a beat, Ms. McNair asks him, “Just one? Do you have siblings at home?”

In a normal year, free or reduced-price school meals were a lifeline for students from low-income families. Schools – or the companies they contract with to provide food – could get reimbursed by the federal government for the free and reduced-price meals they offered. But there was a strict income threshold for eligibility.

For Christina and her family, who have depended on free school lunches off and on over the years, lifting the eligibility requirements also lifted a huge mental burden as she and her husband faced unemployment and underemployment amid the pandemic’s devastating economic toll.

“There’s a stigma behind a free lunch,” says Christina, picking up her meals at the Finneytown Secondary Campus. “Some kids are embarrassed that they’re on that free lunch. And so, with everybody having it, there’s not that stigma behind it.”

The pre-pandemic eligibility rules inevitably meant some students weren’t getting the assistance they needed. Gerry Levy, nutrition services director for several Cincinnati-area school districts, rattles off examples: children of working poor people who made just a bit too much money to be eligible, those who can’t read English and didn’t turn in the forms, and those who were too embarrassed to ask for help. For Ms. Levy, the expansion has been “ideal.”

But the idea of providing universal free meals requires a certain shift in thought – and budgets – that not everyone agrees with. One Indianapolis-area public school contacted by the Monitor, for example, was hesitant to comment on its meal expansions. The administrator voiced concerns over how members of the community, located in a politically conservative area, would react to the fact that people who didn’t need free meals might be getting them.

“The National School Lunch Program was created to provide meals for children from low-income families, period,” says Jonathan Butcher, who researches education policy at the conservative-leaning Heritage Foundation. While opening up eligibility during the pandemic might make sense, previous expansions – and the prospect of making the current one permanent – have resulted in programs straying from their origins and providing meals to people who don’t want or need them, he says.

When it comes to shoring up the previous system, “let’s make a program that is going to help those in need as effectively as possible,” Mr. Butcher says. “Making school meals universal creates an entitlement – it essentially gives up on the idea that we should be concerned about accuracy.”

“All of a sudden we can afford it”

Before the pandemic, during the 2019-20 school year, Ms. Johnson’s school system was on track to rack up nearly $100,000 in school lunch debt, accrued from students not paying for their lunches.

When students pass through the lunch line without any cash, schools usually serve them anyway and document the money the family needs to pay back. When it’s a kid who forgot her lunch money, that’s no big deal. When it’s a family struggling to make ends meet – but ineligible for free meals – schools are stuck chasing after money from people who don’t have it. In recent years, the MCCSC has turned to a local charitable foundation and the federal government to help reconcile the negative balance.

But this past school year brought a completely unexpected test: Can the nation actually afford to offer free school lunch? Ever since March 2020, MCCSC has done just that, and its school lunch debt problem has essentially disappeared.

“I’ve been in school meals since 1993. And when I came in … the big push was universal feeding” – that is, free school meals for all, regardless of income, says Ms. Johnson. “For a gazillion years, [the United States Department of Agriculture] would say we cannot afford it. Then, COVID. And all of a sudden we can afford it.”

This spring, there aren’t as many free meals being served as Ms. Johnson would have expected – children have returned to classrooms, but some families are still remote, and not all are picking up meals. Others are packing lunch, out of COVID-19 concerns. But the results of this year’s experiment in universal free meals are clear – at least to her.

“If we’re supposed to treat all kids the same, if public education is supposed to be free, and we know that the kids can’t make it through the school day without having something to eat, then why isn’t it a part of a free education?”

After the death of Marvin Scott in a Texas jail, advocates point to disparities over marijuana arrests

Teacher goes on racist rant, not realizing Zoom was on, mother of Black child says