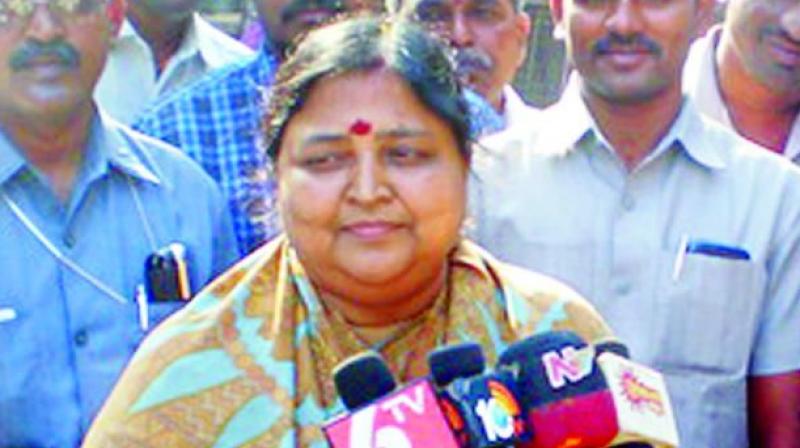 TIRUPATI: With hardly ten days left for the by-election, candidates are having a busy schedule with the door-to-door campaigning in the Tirupati Lok Sabha constituency. The political temperature is on the rise here with visit of senior political leaders from various parties.

Considered a stronghold of YSR Congress with two back-to-back wins in 2014 and 2019, the ruling party is confident of winning the seat with a record majority. However, candidates of other political parties like the BJP, Telugu Desam and Congress are also trying hard to impress the voters.

The BJP has taken the by-poll seriously as it hopes to make inroads in Andhra Pradesh. The saffron party has deputed a host of state and central leaders like Sunil Deodhar MP, GVL Narasimha Rao and Somu Veerraju to spend time in the temple city to win votes for its candidate.

BJP leaders are camping in the city for a few months now. Party candidate K Ratna Prabha joined them recently and met all sections of people. Their daily routine involves meeting various sections of the people, visiting constituencies and even breaking bread with some key leaders to rev up the mood in favour of the party.

It appears that the BJP central leaders have brought in their political strategies such as play of religious politics to the by-election scene. Political experts see this as an old trick that may not work in AP. It was already proven in the recently concluded local body elections that the spate of attacks on temples and religious institutions, allegedly stage-managed by Jagan’s political rivals, did not hamper the YSRC’s winning chances in the state.

“Telugu people will not get swayed by religious politics. They are making unwarranted references to the Christian faith to embarrass CM Jagan and his government and accused him of using his official position as a propaganda tool for missionary activities. But the AP people didn’t get carried away. They gave us a clear mandate even in the municipal polls,” a senior leader of YSRC commented.

The saffron party leaders are, however, saying that their cadre was charged up with their ally and star campaigner and Jana Sena chief Pawan Kalyan conducting a road show here. The BJP won this seat in 1999 when N Venkataswamy contested on its ticket.

Taking this by-poll very seriously, the TD has chosen a new strategy to campaign in the by-election. Party chief Chandrababu Naidu is learnt to have advised that his party’s senior leaders and candidate Panabaka Lakshmi, a six-time MP and former Union Minister, must visit each house at least 10 times before the campaign deadline and explain various issues.

Two days ago, Naidu’s son Nara Lokesh also joined the TD leaders in Tirupati and he has been extensively campaigning in the constituency.

On the other hand, Congress candidate Chinta Mohan, who is also a six-time MP and former Union minister, started his election campaign in Chittoor and Nellore districts much before the by-election schedule was announced. Taking on his rivals in his style, the senior politician is trying to propagate that only the Congress can offer good governance in the country.

Meanwhile, the ruling party hopes to repeat the success by highlighting its achievements. YSRC chief Jagan had chosen a new face in Dr. Maddila Gurumoorthy, a 36-year-old physiotherapist, who hails from a non-political family of Mala (dalit) caste. The ruling party believes the “Jagan wave” prompted by his welfare schemes will help them have a thumping majority. Local MLAs have taken the responsibility for conducting door-to-door campaigns.