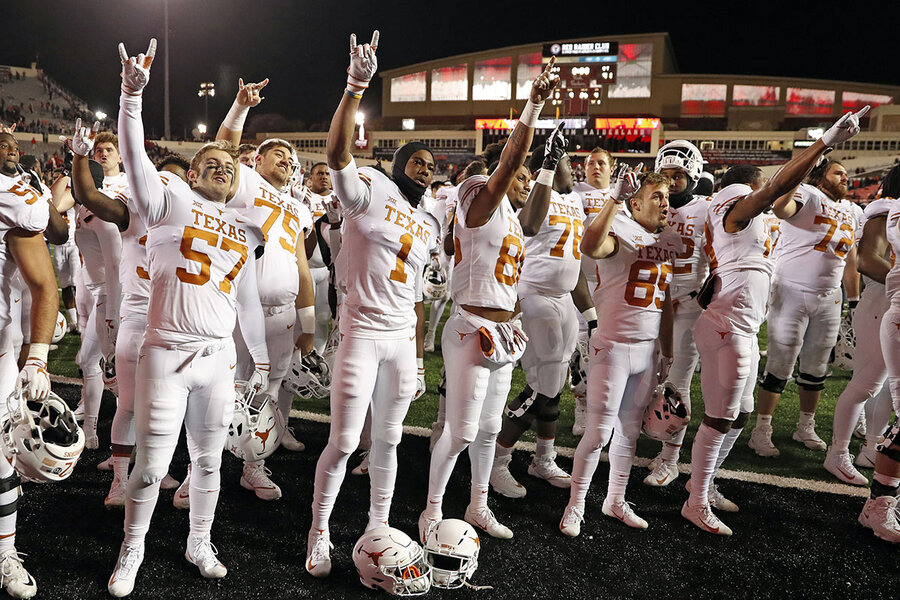 The pop of softballs hitting leather gloves faded away, and as the University of Texas at Austin players lined up on the third base line last month, the first stirring notes of the school’s official song blared out of speakers.

“The eyes of Texas are upon you,” the crowd sang, like generations of Longhorns have before them. “You cannot get away.”

There were no signs of dissent or disapproval in the crowd – but the century-old lyrics have become a front in America’s culture war, and a manifestation of the nation’s post-George Floyd racial reckoning.

The University of Texas at Austin has been swept up in the nation’s racial reckoning and is asking if its spirit song – “The Eyes of Texas” – could come from a racist era a century ago but still be fairly embraced for its modern intent as a unifying song.

Since last summer, protests against racial injustice have demanded changes in policy and in politics – but also changes in tradition. While politics and policy are often subject to change, tradition, by definition, isn’t – like the official song of the Lone Star State’s flagship university.

Around the turn of the 20th century, then-UT President William Prather often told students that “the eyes of Texas” were upon them – a call to make the most of their education. It stuck, inspiring a song now intertwined with generations of memories and emotions.

But for some Longhorns, it’s a source of discomfort. Though the lyrics are not explicitly racist, they point to its ties with the Confederacy and blackface. A song that provokes feelings of disgust and dehumanization, not pride, they say, shouldn’t be the school’s official song.

It has been the source of an agonizing debate here – with protests and boycotts, soul-searching and bullying, historical detective work and threats by donors to withhold funding.

It’s not a new debate, but until this year the main allegations – that the title was inspired by Confederate Gen. Robert E. Lee and it was performed at minstrel shows more than 100 years ago where students would often wear blackface – had not been forensically examined.

So when some alumni and students – including some Black athletes – last summer called for replacing the song and not requiring players to sing it, UT President Jay Hartzell responded by commissioning an academic study of the song’s history.

Eight months later, the study concluded it was very unlikely that the lyrics originated with General Lee, and that while the song “probably debuted in blackface” at a minstrel show in 1903, it had been written earlier. While the song was created in a racist setting, the report concluded, it wasn’t “overtly racist.”

“I saw [the report] and thought, it’s not enough,” says Alberto Martinez, a history professor at the university. He spent 15 days last month doing his own research on the history of “The Eyes” and he has some bones to pick.

Specifically, Dr. Martinez traces the title to a Confederate war story that President Prather likely heard. Before charging the enemy in an 1864 battle, the Texas Regiment heard that “the eyes of General Lee are upon you.” He also cites primary sources that indicate the song had been written for the 1903 minstrel show, on the day of its performance.

“That is not what the song presently is, and that is not how most singers intend it. But those are its origins,” concluded Dr. Martinez in his report.

“I’m not a fan of cancel culture,” he says. “This is not a song that generates enough unity to continue being the official song of UT.”

While he’s been criticized by supporters of the song, he’s not yet had a response from the university about it.

The authors of the UT report, for one, say they want their research “to start a conversation.” Though the university has stated that “The Eyes of Texas” will remain the official fight song, the historical study said that “from its inception [the song] has always been a song about accountability … [compelling] the university to be transparent about its past and be ever more accountable to the state and its diverse people.”

Emails from powerful donors and alumni to university leadership last June obtained by the The Texas Tribune included direct threats to withhold funding to the school if “The Eyes” was dropped as the official song.

Among the emails was one from donor and alumnus Robert Reeves, a tech entrepreneur in Austin. He argued that even while “The Eyes” has been the soundtrack to his most cherished memories – including as a lullaby to his newborn son at bedtime – current students should be allowed to define the school as they see fit. So he offered to help make up the difference of funding lost if the song were dropped.

Tradition “is just something you have done for a long time,” he wrote in a post online last June. “To be a Longhorn means much more than a song.”

Suicides fell in 2020, defying predictions in a year of loss