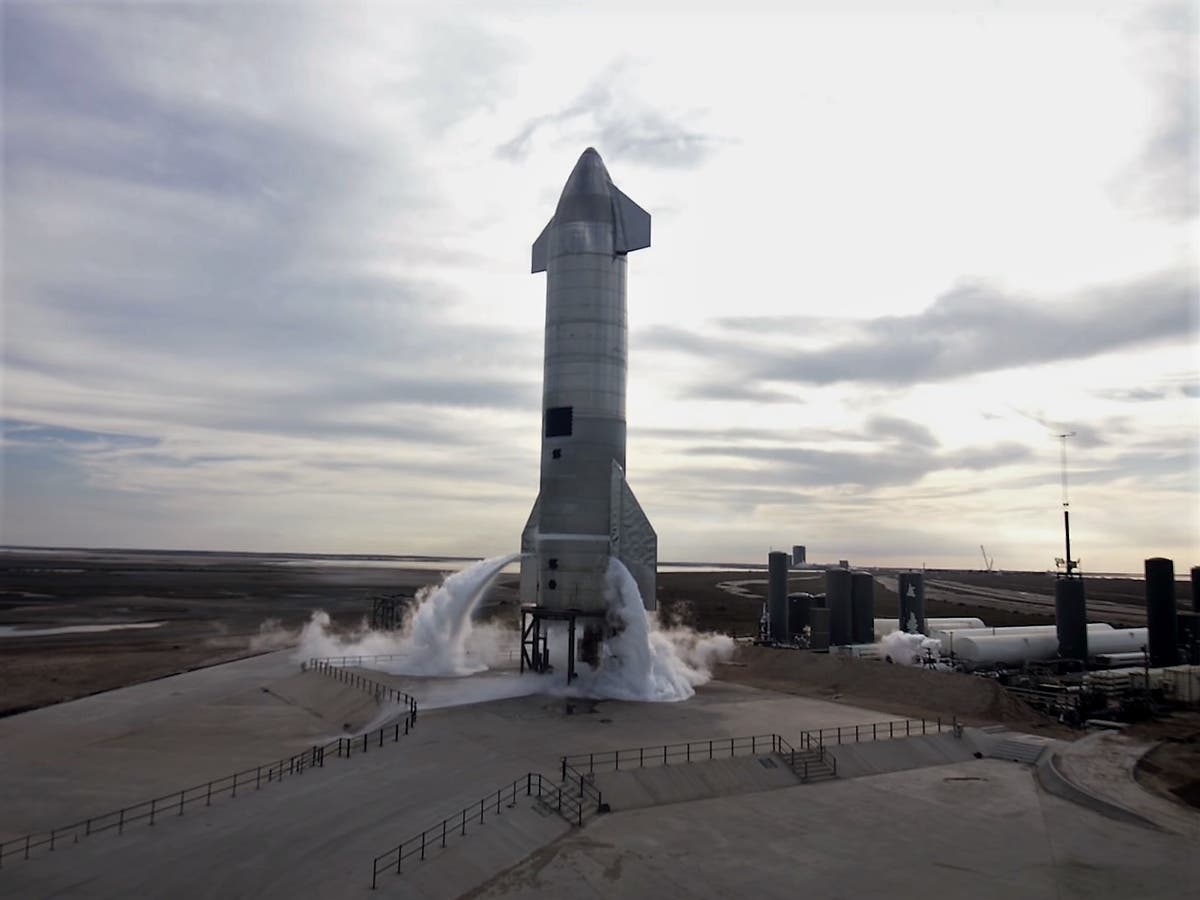 Starship SN11 was already on the launchpad at the firm’s Boca Chica facility in Texas and had completed a static fire test when the 10km launch attempt was cancelled.

The test attempt came just three months after the first high-altitude flight of a Starship craft, with launches of SN8, SN9 and SN10 all ending in an explosion.

A successful launch and landing today would have been a huge step towards Elon Musk’s ambition of colonising Mars with hundreds of Starships.

SpaceX is expected to reattempt the test next week.

It is the fourth major high-altitude jaunt for the Mars-bound craft, with all three previous attempts ending in a fiery explosion.

There have been numerous delays to the latest launch but now the weather is clear, local roads are closed, FAA clearance has been sought, and fingers are crossed that today is the day.

The Starship SN11 test comes just over three weeks after the last SN10 launch and landing. It proved a massive success and achieved what its predecessors could not by actually landing, however roughly eight minutes later it performed a rapid unscheduled disassembly.

You can read the full report on that test here:

SN11 is already waiting in the wings after SN10’s fiery demise, as Musk continues relentless pursuit of creating a ‘space-faring civilisation and a multi-planet species’

Starship SN11 is currently venting following the static fire test, which is a good sign that things are progressing towards a flight test today.

I have received an “Alert” notice and a road closure has been scheduled from 7 a.m. – 7:30 p.m. on Friday, March 26. According to the Cameron county the closure is for engine testing (static fire) and 10km flight. 🔥🚀🔥@NASASpaceflight pic.twitter.com/b6GYAkcOkg

The launchpad appears to have reopened, with a train of at least seven vehicles heading towards it. SpaceX engineers will do some checks following the static fire test and then prepare for a launch attempt.

Static fire!
Listen to that raptor 🔥

With approval from the Federal Aviation Authority (FAA) in place, airspace is cleared ahead of launch.

Before that, RGV Aerial Photography managed to capture some HD birds-eye footage of the launch sight, complete with a solar farm, a sneak peak of Starship SN15, and a lot of construction work.

Boca Chica Village evacuation is officially underway. There is no word from SpaceX on when to expect the launch to take place, with all three previous tests receiving no prior warning until around 10 minutes before they took place when the official stream went live.

There is also no public timeline for Starship’s development, though we have an idea of what to expect through various statements put out by SpaceX and comments from Elon Musk:

July 2021: Starship SN20 or earlier will perform the first ever orbital flight with a super heavy booster attached.

2023: First commercial flight of Starship. Japanese billionaire Yusaku Maeawa bought the first ticket and plans to bring eight members of the public with him on the trip around the moon.

Apple News: All we know about the iPhone SE, iPhone 12 and iPad Pro 2020 leaks

Apple is planning an ‘extreme’ version of the Apple Watch, report claims