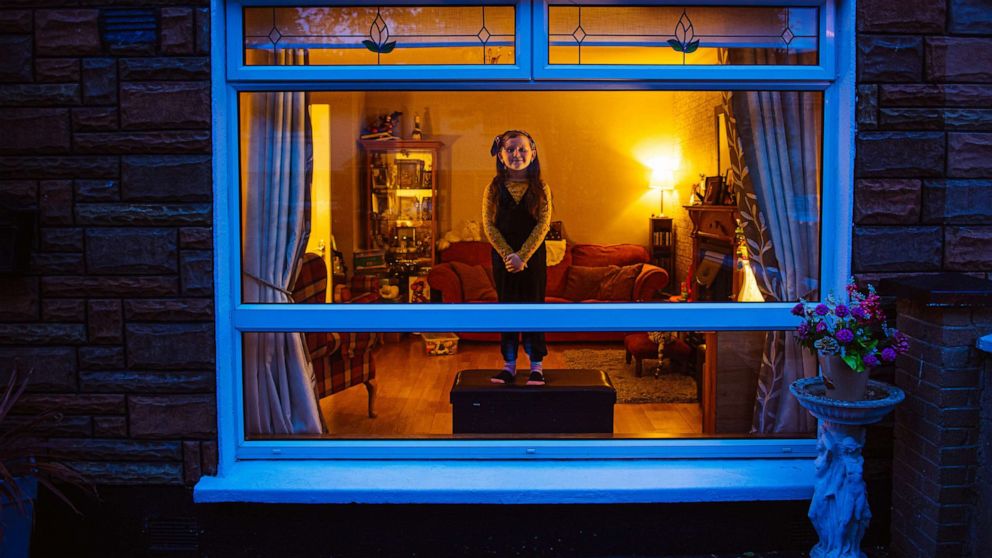 DUBLIN — They are family portraits for the pandemic era.

An Irish photographer is taking portraits of people locked down in their homes during the coronavirus pandemic, by photographing them through their windows at twilight.

The unusual portraits that use the house windows as frames, are taken by Ruth Medjber, a successful music photographer based in Dublin.

Ireland has been under strict lockdown for much of the past year, with people largely confined to their households for months at a time.

Medjber normally photographs top music acts and festivals, previously acting as a tour photographer for Arcade Fire. When Ireland was first ordered into lockdown in March 2020, her work also went on pause and Medjber said she remembered an idea she’d had years before while walking around Dublin of using people’s illuminated windows to frame them.

“I kinda shelved the idea in my mind, because it didn’t have any relevance, it was purely voyeurism, you know,” she said. “Then when lockdown hit. I suddenly realized that ‘God, everybody across Ireland is at home right now.’ I remembered the idea I had years ago, and I thought now it has relevance. Now it means something.”

Medjber first set herself the goal of doing just 16 homes, enough for an Instagram post. After she posted them though, Ireland’s main national newspaper The Irish Times published the images on its front page, and she was flooded with requests from people asking her to photograph them.

“Then I went, ‘OK, I have to do this.’ It can’t just be Dublin, and it has to be representative of our entire nation of who lives here in 2020,” Medjber said in an interview, sitting in a studio wallpapered with the portraits.

“I really went for it, and so for three and a half months, I got in my car and I drove all across Ireland, every single night.”

Eventually, she would photograph more than 150 households and nearly 500 people for what would become a book, ‘Twilight Together: Portraits of Ireland at Home’, published by Penguin last year. Since then, people have continued to commission her individually for portraits as Ireland’s lockdown has stretched on. She offers a shoot for about $300.

While making the book, Medjber set to capture as many households as she could in the brief window of twilight. She had thought she had to hurry, believing lockdown would end soon. In reality, Ireland went back into its highest level of restriction in December and looks set to remain largely closed down until at least June.

During the shoots, she said she doesn’t want to direct people, instead allowing them to choose how to pose or what to show. For lighting, she would just ask people to turn the main light on in their room in advance and put lamps in the corners. The shoots usually last little more than 5 minutes.

“There was a certain type of person who was very serious, very sombre,” Medjber said. “And then there were kind of people who were at the other end of things — who were posing like drinking a whole bottle of wine and were having a party inside. Which was kind of how we all navigated the pandemic. There’s happy moments where we’re just trying to remain hopeful, we’re just trying to get on with it. But then there’s an awful lot of sadness,” she said.

Medjber’s arrival itself could bring delight. She described arriving at one street with 10 houses where people started calling out for her to do their portrait — people started frantically throwing window cleaner to each other as she ran from house to house.

“A lot of the people when I was doing this, I might have been the first person that they’d seen in six, seven, eight weeks,” she said. “So it was a bit of craic for them. It was something to get dressed up for. It was fun.”

Medjber said the book shoot was challenging. Often she had to sleep in her car, and she was stopped many nights by police checking she was allowed to be out (she had permission as a journalist). But she said as she was leaving, people would often leave care packages for her, including spa products or whiskey.

“People are just really generous and lovely and calm, and that’s kind of what I felt walking away from the windows every night,” Medjber said.

She said she believes people’s desire for the portraits comes from wanting to mark the complicated, often very hard, experience of the past year, which had seen suffering and boredom, but also had powerful moments of togetherness. She said she views the book as a flipbook record for generations that won’t remember the pandemic and will struggle to understand the weirdness of the time.

“I think that everyone wants to just acknowledge what happened this year, wants to capture it and go, ‘OK, we lived it, we survived it, this picture represents the COVID pandemic and how our family got through it,'” she said.