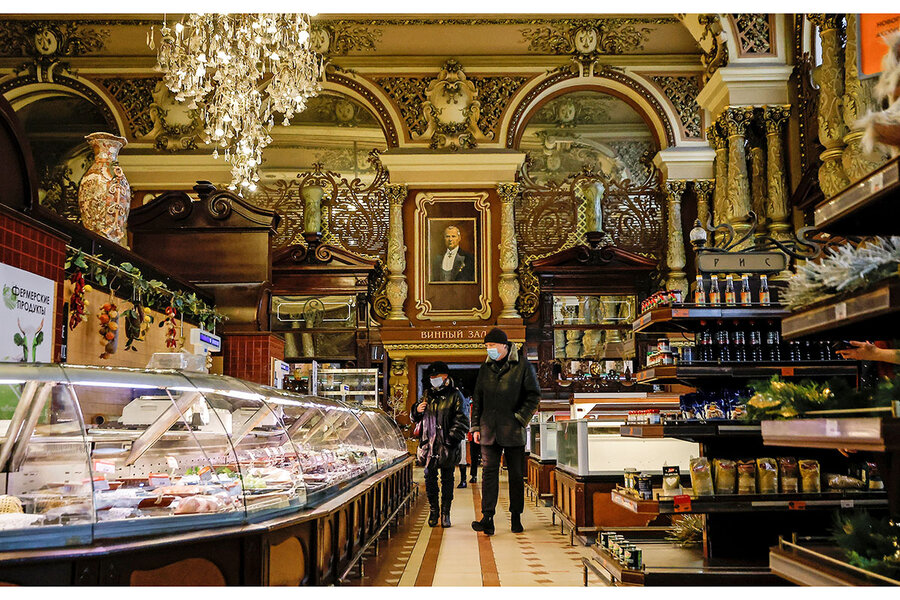 This weekend one of Moscow’s most iconic landmarks, the Eliseevsky luxury grocery store, will close its doors forever, bowing after 120 years to the forces of 21st-century consumer capitalism.

Muscovites have been thronging to the old storefront, a stone’s throw from the Kremlin, for one last look. Some are stepping inside for a selfie against the shop’s extraordinary background of magnificent colonnaded walls, lavish vaulted ceiling, crystal chandeliers, and wood-paneled shelves.

Opened in 1901 in a former 18th-century palace, it served originally as a luxury food shop for pre-Revolutionary, upper-crust denizens of central Moscow. But it saw its heyday in the later Soviet period when, as “Gastronome No. 1,” it acted as a display window for visitors to the Soviet capital to showcase the city’s purportedly excellent provisioning.

Muscovites have fond memories of Eliseevsky, an ornate grocery store famous for full shelves in the shortage-plagued Soviet Union. Its closure underscores how different the consumer world is in modern Russia.

In a land of perpetual shortages, Eliseevsky’s shelves were piled high with delicacies unimaginable elsewhere, such as oranges and bananas, coconuts and real coffee.

Foreign tourists usually scheduled a stop at Eliseevsky – they still do – while people from all over the Soviet Union would come to gawk at its palatial interior and snap up some impossibly rare produce to bring to the folks back home.

“My mother used to take me to Eliseevsky as a boy, and I still have the fondest memories of the place. Going there was kind of an escape,” says Mikhail Chernysh, now a researcher at the official Institute of Sociology in Moscow. “I recall a delicious kind of sausage that you just couldn’t find anywhere else. Of course, you had to stand in line for an hour or more to get some, but that doesn’t seem to tarnish the memory.”

Yes, those lychees are real

Since the collapse of the Soviet Union three decades ago, Eliseevsky has struggled to reinvent itself as a regular grocery store. Even neighborhood customers spurned it in favor of convenient supermarkets that offer lower prices and free parking.

Today the variety of goods on display in almost any village grocery shop makes Soviet-era Eliseevsky look impoverished by comparison. Hypermarkets, such as those belonging to the French Auchan chain, have sprung up in most Russian cities, and some older people admit that they still pinch themselves to be sure they are not dreaming up the spectacle of a cavernous shop with high shelves that overflow with every imaginable kind of produce.

Giant shopping malls sprawl through city suburbs too, offering a one-stop-shopping concentration of goods and services, along with enormous parking lots for automobile-obsessed, post-Soviet Russians. Some have even become popular sightseeing attractions, such as the three theme park-like “Vegas” malls on Moscow’s outskirts, one of which sports scale models of the Roman Colosseum and the Leaning Tower of Pisa.

And if you don’t want to go out shopping, web-based delivery services make it possible to order almost anything from a restaurant or supermarket and have it delivered to your door within an hour or so.

“Nowadays the food shortages we grew up with are a distant memory, and Eliseevsky’s claim to exclusivity is long gone,” says Mr. Chernysh. “It’s having enough money that’s the problem today, not the availability of things.”

Eliseevsky’s woes grew as the ambitious Moscow city government embarked on a massive urban renovation project in recent years. That made driving in the city center even harder than it had been, encouraging residents of the exclusive Tverskaya Avenue neighborhood, near Eliseevsky, to sell up and move to the suburbs.

“There is now a severe shortage of parking downtown, and it’s hard to get to the Eliseevsky store even by taxi, since stopping is forbidden,” says Igor Berezin, a Moscow-based marketing consultant. “So Eliseevsky is mainly a shop for local residents, but there are far fewer of them in that area than there used to be. In fact, many luxury shops in the heart of downtown now find themselves in difficult straits.”

The store’s problems were compounded by a murky 1990’s privatization, which left the city claiming ownership of its premises, while a company that has since gone bankrupt holds the famous Eliseevsky trademark. City officials have promised to preserve the landmark in some form. But as its closure looms, no plan has been made public.

“Over the 20th century, nobody was taking care of old interiors in Moscow buildings, for various reasons,” which makes Eliseevsky a rare and valuable exception, says Alexander Frolov, a coordinator of Archnadzor, a public architectural watchdog. “The status of Eliseevsky as a historic monument stipulates that it must retain a commercial function. Something will have to be worked out.”

The building’s cachet as a tourist attraction is well established, and before the pandemic Moscow was becoming a popular tourist destination, attracting more than 20 million visitors in 2017, including 5 million foreigners. The building’s ornate interior might lend itself to an upscale store for tourists, a restaurant, or perhaps a coffee shop to serve the foot traffic along Tverskaya Avenue, which is heavy in normal times.

“Eliseevsky is an extraordinary place, which holds a lot of historical meaning,” says Irina Levina, a Moscow tour guide. “So there need to be some extraordinary decisions taken about what to do with it. It’s hard to imagine the city without it.”

How the pandemic may transform London for the better

It’s official: Putin signs law that could extend his rule to 2036