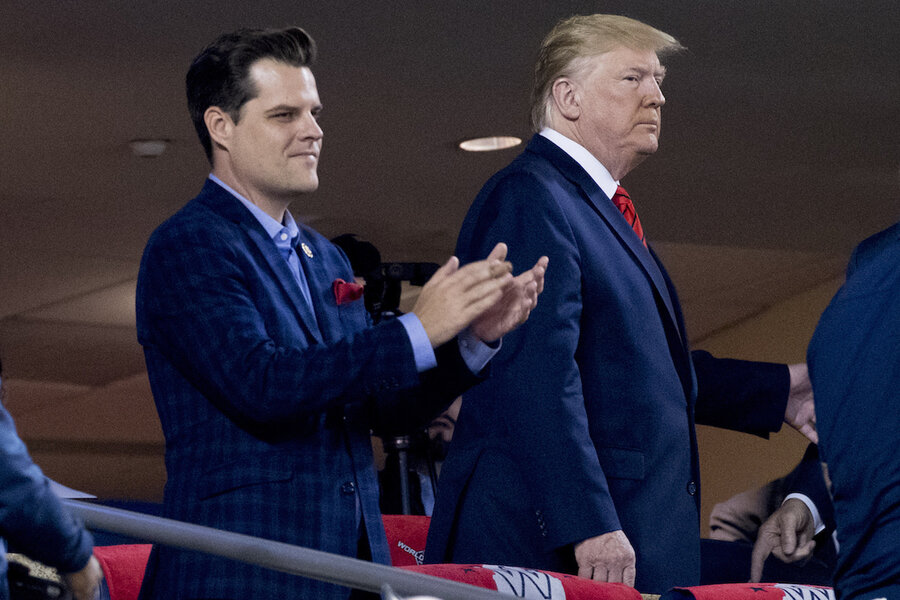 The mere whiff of a scandal once unraveled political careers with stunning speed. Not anymore.

Suddenly embroiled in a federal sex trafficking investigation, Rep. Matt Gaetz of Florida has denied the allegations, rebuffed suggestions that he resign and sent fundraising appeals that portray him as a victim of a “smear campaign.” He’s expected to make a high-profile appearance Friday at former President Donald Trump’s Doral golf club in Miami.

The Republican congressman joins a growing list of politicians from both parties – almost exclusively men – who are defying the traditional response to controversy. Rather than humbly step back from public life, they barrel ahead, insisting they did nothing wrong and betting that voters will forget alleged misdeeds once the news cycle eventually shifts.

“Clearly this is a new strategy people are employing in crisis response,” said Brent Colburn, a Democratic strategist and veteran of President Barack Obama’s administration. “It is a new chapter in the playbook.”

Mr. Gaetz’s political future remains in question and could fully disintegrate, depending on how the federal probe unfolds. But after spending the past several years as one of Mr. Trump’s fiercest public defenders, Mr. Gaetz’s game plan strongly mirrors the former president’s approach.

After a video emerged in the final weeks of the 2016 campaign of him boasting about groping women, Mr. Trump apologized “if anyone was offended” and dismissed the episode as “locker room talk.” He refused calls by some in his own party to leave the presidential ticket and won the election just weeks later.

As president, Mr. Trump would respond to one burgeoning scandal after another by constantly moving ahead, making it harder for the public to linger on one issue for too long, even if that meant stirring up fresh controversy on another topic.

The pressure on Mr. Gaetz is mounting. A hearing Thursday revealed that one of his political allies, Joel Greenberg, is working toward a plea deal with federal investigators, which could add to Mr. Gaetz’s legal jeopardy.

For now, though, the congressman appears to be emulating the former president’s approach and appealing to his most loyal supporters. The group sponsoring the Friday event at which he’ll speak at, also organized the Jan. 6 “March for Trump” rally in Washington that ended with a mob storming the United States Capitol in a deadly insurrection.

“Trump sees in Matt Gaetz what he wanted in everyone else,” said Republican strategist Rick Wilson, adding that, in many ways, the congressman is “the son he never had.”

Mr. Gaetz isn’t alone in refusing to bend in the face of a political storm.

Democratic New York Gov. Andrew Cuomo has steadfastly refused to resign despite several sexual misconduct allegations that spurred calls from some of the most powerful members of his own party for him to step aside.

Democratic Virginia Gov. Ralph Northam balked at resigning in 2019, when a picture surfaced from a 1984 medical school yearbook showing one man in blackface and another wearing a Ku Klux Klan robe. Governor Northam apologized while acknowledging he was the one in the robe. But days later, he denied it was him.

The political fallout eventually calmed and staying put allowed him to win praise for handling Virginia’s response to the coronavirus pandemic.

“Men in both parties will do this. They double down, they deny and they hope that it will just sort of pass them by,” said Democratic strategist Nicole Brener-Schmitz. “Women are damned if they do, damned if they don’t.”

Meredith Conroy, a political science professor at California State University at San Bernardino and author of several books, including “Masculinity, Media, and the American Presidency,” said women tend to be more damaged than their male counterparts by scandal.

“Women in general, but in politics, too, are perceived as more honest and moral and trustworthy,” Ms. Conroy said. “So, when women don’t fit that image, it definitely becomes a point of criticism.”

An exception is Republican Georgia Rep. Marjorie Taylor Greene, who is also on Friday night’s Doral program and has pursued a push-forward-at-all-costs strategy. Ms. Greene was stripped of her committee assignments and forced to apologize on the House floor for her past support of QAnon and other conspiracy theories, and for spreading racist tropes.

But she refused to resign, and saw her fundraising spike and her star only brighten in certain conservative circles.

Mr. Gaetz is expected to return to Washington next week when Congress resumes, and he is not expected to shy away from potential fights. He remains popular in his heavily pro-Trump district, meaning that calls for him to resign that resonate in places like Washington are unlikely to hurt him back home.

Mr. Wilson warned skeptics not to underestimate Mr. Gaetz’s skill as “facile” debater, taking on the establishment to the delight of Trump supporters across the nation.

“It’s a real test case,” Mr. Wilson said of the Trump-styled strategy. Mr. Wilson said that days before the initial reports emerged, he was hearing from people inside and outside the Florida government that Mr. Gaetz was “test-driving” his defense.

Mr. Gaetz also approached White House officials seeking a preemptive pardon for himself near the end of Mr. Trump’s term, according to a person familiar with the matter.

The request was for a broad preemptive pardon for Mr. Gaetz and other congressional Republicans, the person said. It came as the Justice Department was actively investigating Mr. Gaetz’s conduct to determine if he violated federal sex trafficking laws and questioning associates about his behavior. It wasn’t clear if he brought up the specific investigation during the discussion.

Mr. Trump has said Mr. Gaetz never asked him for a pardon.

Top Republicans have been conspicuous in failing to speak out in Mr. Gaetz’s defense. The Floridian’s attention-grabbing style has often antagonized both parties, further suggesting that, though his congressional seat is likely safe, he’s unlikely to accomplish much, even within his own party, outside of Mr. Trump’s shadow.

President Bill Clinton used a different strategy to survive being impeached during the Monica Lewinsky scandal, opting for contrition and watching much of the political blame for the proceedings ultimately fall on the GOP-controlled House, allowing him to finish his term in a stronger position. Newt Gingrich resigned the House Speakership amid scandal in 1999, but recovered enough to run for president in 2012, winning the South Carolina Republican primary.

“If your goal is simply to maintain your position, it might be an effective strategy. If your goal is to have an impact, it’s probably not the way to go,” Mr. Colburn said. “Just because it works doesn’t mean it’s the right thing to do.”

Biden seeks return to Iran deal. Can he bring Americans with him?