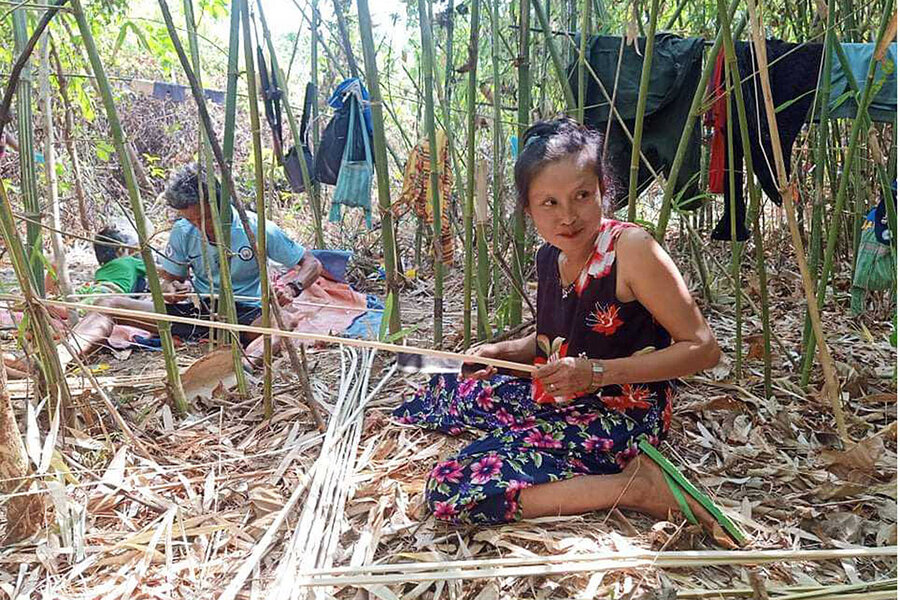 Like her mother and grandmother before her, Paw knows what it is like to flee assaults from Myanmar’s military – running from thatched-roof village huts into the jungle to huddle without food or warmth, yet afraid to make a fire lest it alert soldiers to their whereabouts.

“Not long ago, the military used planes and airstrikes and dropped bombs in the Karen area,” says Paw, a member of Myanmar’s Karen ethnic minority and a relief worker who now helps thousands of displaced people. “You can’t find anyone in the villages now. They are all in the jungle or digging trenches to hide in,” she says by phone from the Thailand-Myanmar border.

For decades, Myanmar’s military has been battling Karen fighters and a slew of other ethnic armed groups around the country that seek greater autonomy, promised but never realized after the country’s independence in 1948. But despite the military’s recent escalation of attacks on Karen villages, today Paw sees a glimmer of hope – mainly because a far broader swath of Myanmar’s population is now confronting the military’s wrath and so can empathize.

Signs are growing that Myanmar’s coup and brutal military crackdown are forging common cause between ethnic minorities and the majority Bamar population, as old animosities give way to new political imperatives.

“They know the Burmese military treats the Karen and other ethnic minority groups cruelly. … They know that now, because the military also treats them badly,” says Paw, who asked to withhold her real name for her protection.

“Now they know we are suffering for more than 70 years, that we had to flee since our grandparents until now,” she says. “So we are a little bit happy.”

Since Myanmar’s generals overthrew the elected civilian government in a Feb. 1 coup, nationwide protests have erupted against the military junta. In response, the Tatmadaw, as the military is officially known, has launched a brutal crackdown. For the first time, experts say, the Tatmadaw’s cruelty has been laid bare for Myanmar’s young protesters – allowing them to understand the long-standing suffering of ethnic minorities such as the Karen, Rohingya, and others.

“The coup … was the catalyst for a change in perspective and mindset, because now the regime isn’t just killing Rohingya children and burning them alive. They are actually doing that to their own people,” says Steve Gumaer, president of Partners Relief & Development, which has worked in Myanmar for 27 years.

This shared sympathy, in turn, helps foster support for the uphill political push by the remnants of Myanmar’s deposed civilian leadership to forge a new federal government and army with ethnic minority representatives and their armed wings – a framework that, if successful, some analysts argue could help prevent a drawn-out civil war or failed state.

If mounting pressure on the Tatmadaw starts to shake it, “you really need to have something to step in and fill that gap,” says Jason Tower, country director for the United States Institute of Peace.

Otherwise, “you have a scenario where you potentially end up with four or even five fronts of ethnic armed groups combating the Tatmadaw from all directions,” he says. “That’s where things get really ugly.”

For years, Tatmadaw propaganda has promoted Buddhist nationalism among Myanmar’s dominant Bamar ethnic group, which makes up two-thirds of the population, while fueling divisions with ethnic minorities that inhabit border areas.

When the military waged a campaign against Myanmar’s Muslim Rohingya minority in 2017, forcing around 800,000 to flee to Bangladesh in what the United Nations called a “textbook example of ethnic cleansing,” many Bamar believed propaganda labeling the Rohingya as a threat.

But post-coup, Myanmar’s public sees the military as the real threat, experts say. “It shocks me how quickly it’s being dismantled – the racism and the nationalism,” says Mr. Gumaer. “I think it’s because the military took their gloves off and applied the same tactics – tactics that they apply in the minority states … to their own people,” he says, referring to the Bamar. More than 600 people have been killed in the crackdown and nearly 3,000 detained, including civilian leader Aung San Suu Kyi and other senior officials.

In recent weeks, many within the Bamar community have been voicing regrets for their past indifference or animosity toward the Rohingya and other ethnic groups. Meanwhile, members of ethnic minority groups – including the Rohingya in refugee camps in Bangladesh – are joining or cheering on the anti-coup protesters.

“One positive that’s come out of this is that you have … the beginning of a national dialogue about how should we treat people from different communities – that’s long overdue,” says Scot Marciel, who served as U.S. ambassador to Myanmar from 2016 to last year.

“You have ethnic Bamar saying, ‘We heard all these years the ethnic minority groups like the Rohingya complain about the military brutalizing them. We tended to dismiss it to some extent. Now we’re feeling it and we’re sorry we didn’t speak up sooner on your behalf,’” said Ambassador Marciel, a visiting scholar at the Walter H. Shorenstein Asia-Pacific Research Center, speaking in an unofficial capacity at a World Affairs Council event this month.

At the national level, this shift in sentiment is propelling an alignment of political goals between ethnic groups that have been fighting for self-determination, and the broader public’s overarching desire to oust the military junta.

Talks are ongoing between leaders of ethnic communities and a group of elected lawmakers who avoided detention and are working in hiding, known as the CRPH.

Last week the CRPH announced the abolishment of Myanmar’s 2008 Constitution, which guaranteed the military significant powers, including control over key ministries and a quarter of seats in parliament. In its place, the representatives adopted a charter with the goal of creating a “Federal Democracy Union” that would eradicate dictatorship, bring peace, and grant “equal rights and self-determination” to all ethnic nationalities.

Organizations representing Myanmar’s main ethnic groups, including the Shan, Karen, and Rakhine, are seizing the opportunity to overcome differences and work with the CRPH to create a new federal constitution.

Public support for a federal system is surging since the coup, Sai Leik, spokesman for the Shan Nationalities League for Democracy, told the Myanmar Now news outlet this week. “When a lot of people in Myanmar’s mainland come to understand that federalism is not separatism and it can lead to greater unity, we should push the idea harder.”

Thaik, a member of the Shan people who works in Shan state, says he’s witnessed an important shift toward “more unity between Shan and Bamar and among different ethnic groups.” “People are talking a lot about federal democracy,” says Thaik, who asked to withhold his real name for his protection.

Some major ethnic armed organizations – such as the Karen National Union – have also signaled a willingness to join forces in creating a federal army.

Together, the ethnic armies have an estimated more than 100,000 soldiers, compared with the Tatmadaw’s 350,000. “It would definitely cause a recalibration of the Tatmadaw thinking if the EAOs [ethnic armed organizations] unify,” says Jonathan Liljeblad, a Myanmar native who has taught and consulted about human rights and civil society in Yangon and ethnic areas since 2014.

To be sure, mistrust is unlikely to end overnight, but a federal government and army could begin with a few key players and build from there, says Mr. Tower of the U.S. Institute of Peace. Indeed, scattered reports from inside Myanmar indicate the ethnic armies are attracting unusual support and recruits, with some protesters leaving the cities to take refuge, receive military training, and enlist with ethnic forces.

By drawing troops away from urban areas, “the ethnic armed groups are sort of easing the burden on the young people protesting,” one activist, who requested anonymity, told the Monitor by phone from Yangon recently.

“There’s now a new appreciation for both the suffering that a lot of the ethnic members of the population have been through, as well as an appreciation for the steps the Karen and other groups are taking to offer space, to offer protection, and to fight back,” Mr. Tower says.

For Paw, this marks a welcome, 180-degree shift in attitudes toward minorities.

In the past, she says, Bamar people believed “ethnic groups were like terrorists and rebels,” but now, “they say they were blindfolded by the military terrorists.” As the Bamar realize the ethnic minorities were acting in self-defense, “they feel sorry and feel like they don’t have the right to ask for forgiveness,” she says, “but they will help us in the future.”