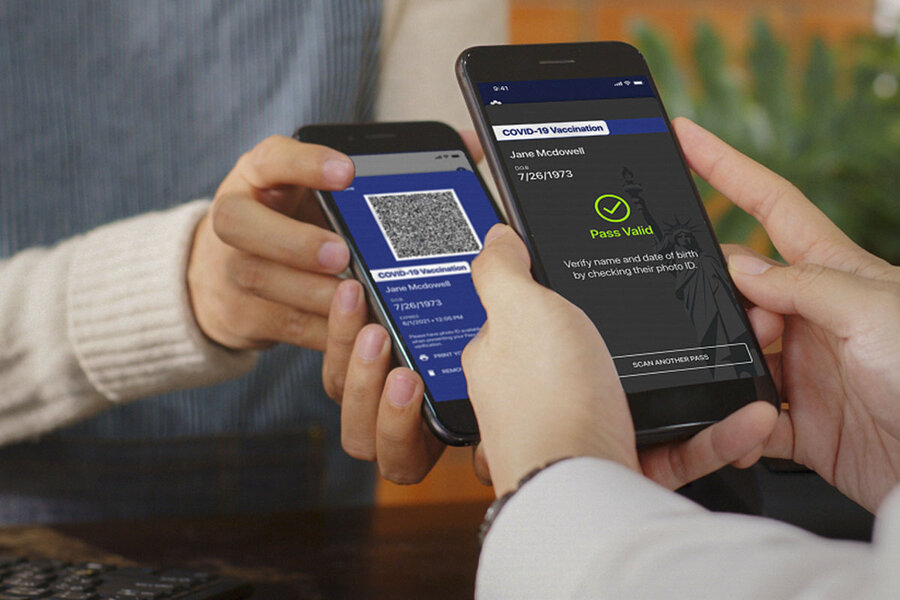 Can the government do this?

Legally, with proper exemptions, it seems so. In terms of the federal government, however, the Biden administration flatly dismissed the idea this week.

“There’ll be no federal vaccinations database and no federal mandate requiring everyone to obtain a single vaccination credential,” said Jen Psaki, the White House press secretary, at a Tuesday press conference.

State governments have more legal latitude to implement such programs owing to Jacobson v. Massachusetts, a 1905 Supreme Court case. Massachusetts could mandate smallpox vaccinations to protect public health, the court ruled then, striking a balance between individual liberty and the common good that has been broadly upheld ever since.

“Jacobson says, yes we have that right [to civil liberties], but it’s not an unlimited right,” says Eric Feldman, a professor of medical ethics and health policy at the University of Pennsylvania Carey Law School.

The fact that current vaccines have only been approved for emergency use represents a new legal wrinkle, experts say, but so far more states – including Texas and Florida – have preemptively banned vaccine passports than have developed them. New York’s “Excelsior Pass,” a voluntary program developed with IBM, is the only vaccine pass to be rolled out so far.

What about private businesses then?

They’ve long been able to place requirements on entry, so long as they’re nondiscriminatory and allow certain exemptions. (See: “No shirt, no shoes, no service.”) We’ve seen many flex this muscle during the pandemic with mask requirements. Vaccine requirements would raise more questions, however.

It’s “clearly lawful” for businesses to require proof of vaccination for employees, and they could probably do the same for customers, says Lawrence Gostin, a public health law expert at the Georgetown University Law Center, in an email.

“I foresee a lot of vaccine mandates for employees, but less so for customers,” he adds. “There are cases where it would be crucial to require customers to vaccinate, such as on cruise ships.”

The Equal Employment Opportunity Commission has laid out guidelines for what employers can require and what they must exempt.

If a disability or a sincerely held religious belief prevents an employee from getting vaccinated, and the company cannot make an accommodation, the agency said, “then it would be lawful for the employer to exclude the employee from the workplace.”

Wait, so someone might not be able to go to work unless they’ve been vaccinated?

Yes, and this is where the ethical and equity questions around vaccine passports get particularly thorny – particularly while vaccines still only have emergency use authorization from the U.S. Food and Drug Administration (FDA).

When you factor in the context that Black and Hispanic people have been vaccinated at lower rates, according to the Centers for Disease Control and Prevention – due in part to both access and hesitancy problems – it gets especially complicated.

“Requiring vaccination as the price of admission is likely to inflame that set of concerns [and] harden vaccine hesitancy and skepticism,” says Dr. Feldman.

“Multiplying the harm of limited access to vaccines by then limiting access to other things would strike many as appropriately concerning,” he adds.

At least 17 public and private passport initiatives are being developed, The Washington Post reported, and as more roll out, those feelings of coercion and hesitancy could intensify, says Jenin Younes, an appellate public defender in New York City.

“It incentivizes people to get a vaccine. But it’s not a good incentive,” she adds. “It creates pressure to get the vaccine. … Public trust [is lost] when people feel coerced.”

Schools already require students to have certain vaccinations, right? How are they approaching this?

Requirements vary by state, but yes, public school systems around the country require students to have some vaccines. (While a majority of states allow religious exemptions, states including California, New York, and Maine do not.) No vaccine has received emergency approval yet for children under 16, but when they do, school districts will likely incorporate it into their mandates, says Professor Gostin.

At schools with strong teachers unions in particular, there will likely be “overwhelming pressure to require the kids coming into schools to be vaccinated,” adds Dr. Feldman.

As for other places of “public accommodation,” like public parks, libraries, and museums, proof of vaccination could be required. Anyone with a disability preventing them from getting a vaccine would be exempt, however.

Could this end up at the Supreme Court? If so, what should we expect?

It’s very possible. The high court has shown a particular concern for infringements on religious freedom in recent years, including on pandemic-related restrictions on religious services. If there are vaccine mandates without clear exemptions for sincere religious beliefs, it wouldn’t be surprising to see the justices step in.

It’s also possible the current court could take a different view of a state’s power to mandate vaccinations than the Jacobson court did in 1905. Some facts are different here than in past cases. The FDA had never granted emergency use authorization (EUA) for a vaccine for an entire population until this pandemic, for example.

Two lawsuits filed so far – one by a corrections officer in New Mexico and one by employees of the Los Angeles Unified School District – make the EUA central to their arguments challenging vaccine mandates.

“Reasonable minds can differ I think on whether a mandate would be appropriate” for an emergency vaccine, says Dr. Feldman. “It’s an issue on which we have no precedent.”

Office buildings are opening back up. Not all employees want to return.