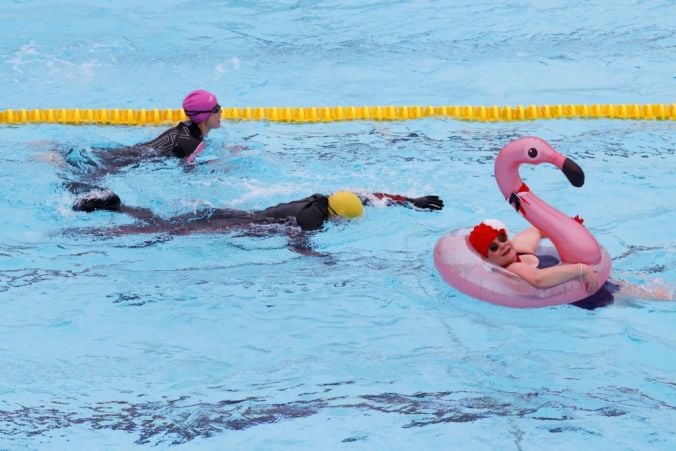 A woman swims with the aid of an inflatable flamingo at Hillingdon lido in west London as following the easing of Covid-19 restrictions across England. (Photo by Adrian DENNIS / AFP) (Photo by ADRIAN DENNIS/AFP via Getty Images)

After over a year of hearing the constant affirmations of ‘Hold Firm’ and ‘We’re in the together’, the messaging surrounding Covid-19 restrictions has changed.

The rollout of vaccine around the world has signalled the shift towards ‘the light at the end of the tunnel’ and ‘the end is in sight’.

However, with travel restrictions still in place and businesses across various sectors still closed, that optimistic outlook is not shared by all.

But while restrictions may be slower to ease here in Ireland, other countries are re-emerging from lockdown. Here are some images showing a glimpse of what Ireland has to look forward to, along with some Covid updates from around the world…

Boats taking part in a performance during the Qintong boat festival in Taizhou in China’s eastern Jiangsu province on April 8th. (Photo by STR / AFP) / China OUT (Photo by STR/AFP via Getty Images)

You should start a keyhole garden

Should we be taking microbreaks throughout the day?

The joy of mile-high quiche