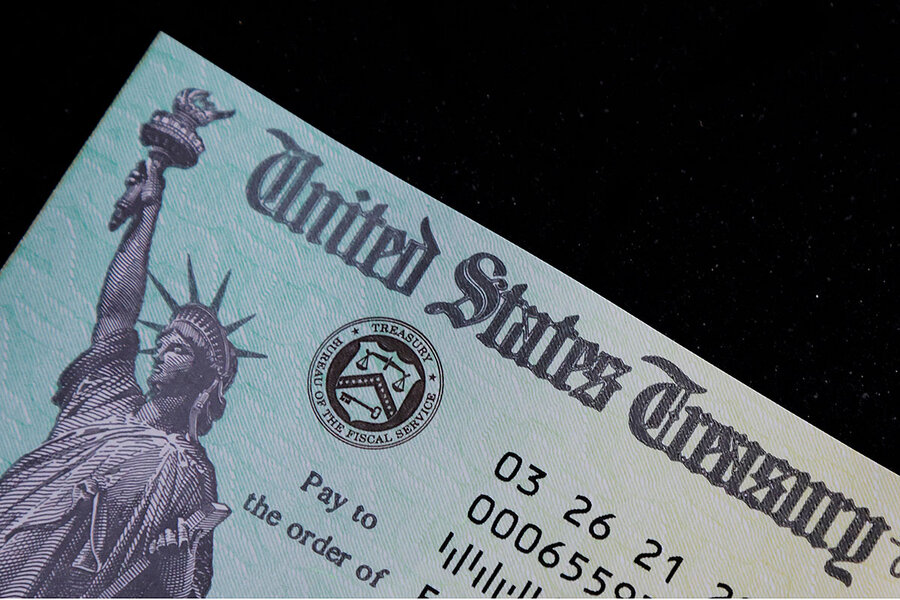 Oneonta is the kind of place where an extra $1,400 could make a big difference. More than 16% of residents in Blount County live in poverty – a higher rate than the state of Alabama as a whole, which already registers as one of the nation’s poorest.

“These stimulus checks are just a way of making more people dependent on the government,” says Virginia Russell, who owns the Look of Xcellence hair salon in Oneonta. It’s a view that’s echoed across this conservative county, where former President Donald Trump won 90% of the vote last November, and where tattered Trump 2020 flags still line the central highway.

Many conservatives see the relief bill as padded with unnecessary items, further ballooning the national debt even as the economic outlook is improving.

Ms. Russell admits she felt differently last year, when President Trump signed the $2.2 trillion CARES Act into law. Passed with near-unanimous support in Congress in the early weeks of the pandemic, that relief bill won approval from 79% of Republican and Democratic voters, according to a Gallup Poll. To Ms. Russell and the other women in the Look of Xcellence, it was a necessary measure in an unprecedented time.

By contrast, President Biden’s American Rescue Plan Act, signed last month, garnered no Republican votes in Congress. And while it initially seemed to be popular among both Democratic and Republican voters, Gallup now finds that only 18% of Republicans nationwide approve of the bill.

“There are some people who the stimulus package really helps, sure. But the people who work,” says Ms. Russell, motioning to herself and the other nodding stylists in the salon, many of whom say they have already received their checks, “we are going to be the ones paying for it.”

This marks the third time in a little over 12 months that Americans making less than $75,000 are receiving payments from the federal government: $1,200 from the CARES Act last spring, another $600 from a COVID-19 relief bill in December, and now $1,400. All the stimulus checks have been framed as an effort to boost the economy and help Americans hurt by the pandemic and its impact.

To some extent, the growing resistance on the right to the flood of government spending may reflect the fact that it’s now coming from a Democratic, rather than Republican, administration.

But with states across the country ramping up vaccination programs and relaxing restrictions, many Americans have also come to feel that the crisis is waning, making federal aid less necessary. Either way, the lackluster or even negative responses by many Republican voters to extra money in their bank accounts may be an early indication of the resistance President Biden will face as he tries to win passage of a $2 trillion infrastructure bill and other priorities down the line.

“Some people really need [the money], and you can’t deny them that,” says Dave Lannigan, a retiree who voted for Mr. Trump, standing outside his house in Covington, Kentucky. “But I think there’s a lot of waste there.”

Like Oneonta, Covington is a struggling area in a struggling state: More than 23% of people here live in poverty.

Back when Mr. Biden was campaigning for the American Rescue Plan’s passage in late February, he implored congressional Republicans to vote in favor of the bill, citing its widespread support among voters. And he wasn’t entirely wrong. A Quinnipiac poll from Feb. 3 found more than one-third of Republicans supported the relief bill, and more than 60% supported the $1,400 checks.

The ensuing debate about whether to include a national $15 minimum wage in the bill may have led to some souring among Republicans. But after the bill passed, conservative media attacked it in earnest as a “Democratic wish list” masquerading as pandemic relief.

In addition to the stimulus checks and extending unemployment benefits, the relief bill also included payments to parents, $1 billion for Head Start, housing assistance for homeless populations, and more.

“The child care credit, the expansion of the Affordable Care Act – it clearly became a bill that was a train for Democratic priorities in addition to immediate rescue priorities, and that made it much more political, especially in the mind of a lot of voters,” says Maya MacGuineas, president of the nonpartisan Committee for a Responsible Federal Budget.

A stylist at the Look of Xcellence salon compares the stimulus checks to “hush money,” saying they allowed Democrats to “usher other stuff in this bill.”

While some conservative voters may have had mixed feelings about last year’s payments as well, many justified Mr. Trump’s stimulus checks out of a mixture of party loyalty and the scale of the health crisis back then. But today, they say, America is in a different place.

“I feel like the coronavirus is pretty much under control now, and people still are using [COVID-19] as an excuse not to go back to work,” says Alex Lenhoff, a server at the Cock & Bull Public House in Covington. “It’s also creating problems in the job market.”

Steve Locke, who owns Covington’s Zazou Grill and Pub, says he’s having trouble filling open positions at his restaurant. According to the Bureau of Labor Statistics, nearly 1 million jobs were added in March.

A Trump supporter, Ms. Lenhoff has remained employed throughout the pandemic, but says she received all three stimulus checks.

“I mean, yeah, it was a help. I’ve used it to buy some stuff for my kids and things like that, pay some bills,” she says. “But most of it’s sitting in the bank still.”

“There’s people that need that stimulus check,” says Mr. Locke. “But all of us didn’t need it.”

In recent weeks, President Biden, Vice President Kamala Harris, and their spouses have been touring the nation to tout the relief bill to the American public, in what they’re calling the “Help Is Here” tour. Today, first lady Jill Biden is scheduled to visit Birmingham, Alabama, to explain how it will help alleviate child poverty.

GOP Rep. Gary Palmer, who represents Alabama’s 6th Congressional District, which includes Blount County, voted in favor of the CARES Act in 2020 but against the American Rescue Plan – despite the fact that it designates more than $4 billion for his state.

“I know it sounds partisan but it’s not,” says Congressman Palmer. Mr. Trump’s two relief bills were “focused and transparent,” he says, but Mr. Biden’s “takes advantage of the pandemic and of people to [do] things that they otherwise wouldn’t do on a more transparent piece of legislation.”

“I think it’s an enormous waste of money,” he concludes.

More than 30 million people on alert for severe weather