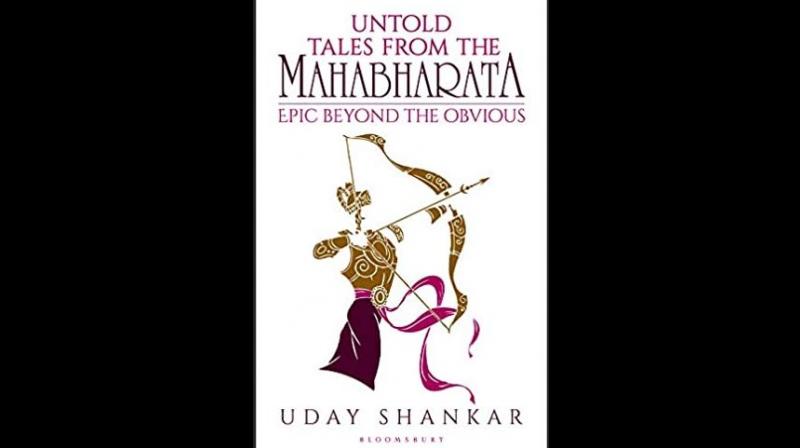 Ever wondered why Arjun’s chariot burnt to ashes after the Kurukshetra War, or who the only Kaurava to cross over to the Pandavas before the battle was? Then dip into this collection of less-heard stories from the epic Mahabharata. Titled Untold Tales from the Mahabharata: The Epic Beyond the Obvious, Uday Shankar has authored an intriguing read.

“An epic that never dies and still remains relevant even thousands of years later —Vyasa’s Mahabharata has always captured our imagination. The saga of two feuding families, with its various twists and turns, has been a compelling read across generations, inspiring many to dig deeper into the great poem. This collection of 20 short stories brings out characters and incidents that are largely unheard of and are buried in the vastness of the epic,” says Uday. “Capturing every emotion, from valour, lust, loyalty and treachery to goodness and ethics so relevant to the world we live in, these stories help us understand the epic better,” he adds.
Explaining that he was interested in epics since childhood, when his mother told him stories from the Mahabharata, he said “Through the book, I wanted to connect the dots using unheard tales of pivotal characters yet not so famous names.”

Uday, who is a telecommunications engineer by profession and has spent over 25 years in the technology space, is a native of Hyderabad but is now settled in Bengaluru. His penchant for training, coaching and mentoring led him to establish TLRTALKS — a company aimed at enabling success through transformation in the fast-changing digital landscape for professionals and students alike. Besides being a motivational speaker, he is also a trained musician and singer.

He started writing the book during the lockdown in 2020. The process, including research, took almost a year “My research took me to various versions of the epic — Telugu and Kannada. They had very distinct context and character approaches. For example, the Telugu version says Arjun’s chariot was a gift from Varun dev but the Kannada version says it was from Agni dev. So, I have added a disclaimer,” says Uday. The story of Abhimanyu is particularly dear to him. “Abhimanyu is the son of Chandra dev, who didn’t want his son to be away from him for long. Therefore, Abhimanyu lived for 16 years with the Pandavas before going back to Chandra dev,” he explains.

Uday has completed another book during the period of lockdown, utilising time to the fullest. “My second book is also ready for release. It is on soft skills but with a twist — Ancient Secret of Soft Skills will be released in July. The book has ancient stories relating soft skills,” he shares.

Seven of the most stylish celebrities over 70

A guide to homemade nut butter