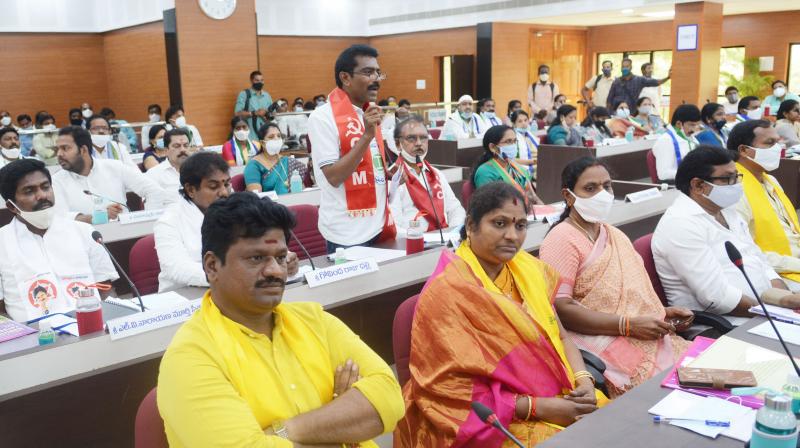 VISAKHAPATNAM: The first council meeting of Greater Visakhapatnam Municipal Corporation (GVMC) on Friday unanimously passed a resolution against the privatisation of Visakhapatnam Steel Plant (VSP). The issue was on top of the agenda and taken in response to a representation given by corporators Dr B Ganga Rao of CPI(M) and Peela Srinivasa Rao of Telugu Desam.

Initiating the debate on privatisation of the steel plant, Lok Sabha member from Visakhapatnam MVV Satyanarayana narrated the efforts taken by the Chief Minister, MPs and MLAs.

Gajuwaka MLA Tippala Nagi Reddy and Anakapalle MLA Gudivada Amarnath said that the state government was strongly opposing the privatisation move and would take up the issue in the Assembly session.

There was heated exchange of words between Amarnath and TD corporators when the former blamed TD for demanding special category status in AP and settling for a special package.

TD corporators later demanded immediate convening of the Assembly and passing a resolution.

Jana Sena corporator Murty Yadav asked for resignation of all the MPs and MLAs of north coastal Andhra to give strength to the ongoing agitation.

CPI (M) corporator from steel city, Dr B Ganga Rao, spoke on the importance of the steel plant remaining in the public sector. Ganga Rao said that Visakhapatnam city grew around VSP and its revenue contribution to the State was immense. GVMC also benefited through its taxes, he said.

“Most importantly, we drew water from the steel plant reservoirs when there was a crisis in summer,’’ Ganga Rao said.

Among other things, the council put on hold, appointment of 38 community guards and beautification of Mudasarlova reservoir park.

Earlier, Left corporators came to the GVMC in a rally from Ambedkar statue raising slogans for protection of the steel plant. TD corporators led by Govinda Reddy took out a padayatra from the steel plant main gate to GVMC. They garlanded the statue of Mahatma Gandhi before entering the corporation.

Vaccination drive in AP to face acute shortage of vaccine