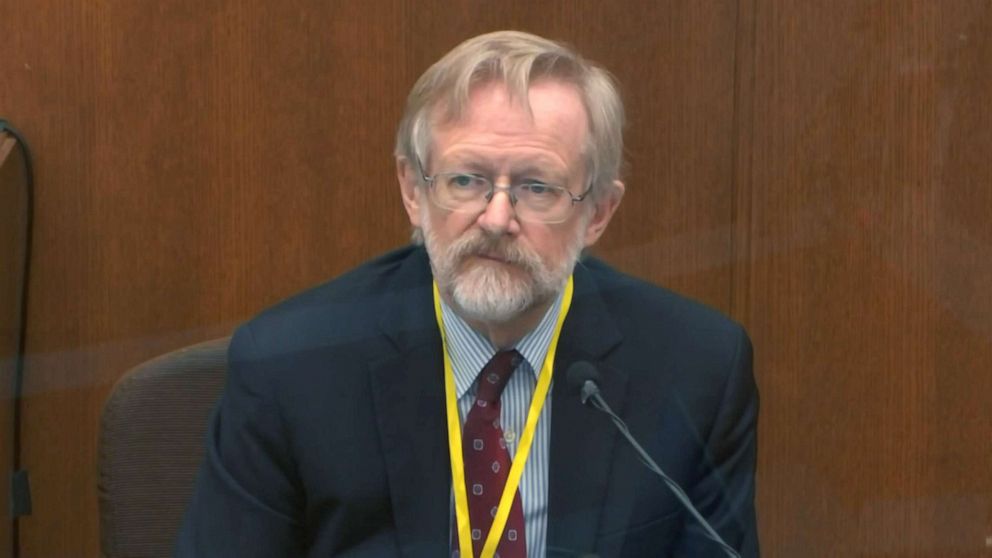 Paramedics found Floyd had no pulse upon arriving at the scene, and a respiratory expert said even a healthy person would have died under the restraints Chauvin used on Floyd.

The testimony of these medical experts is expected to carry great sway over the jury, as defense attorneys contend Floyd’s death was caused by drugs he’d ingested, underlying health conditions and his own adrenaline, not the pressure of Chauvin’s knee on his neck for more than nine minutes.

An autopsy found fentanyl and methamphetamine in his system.

A pulmonologist and national expert on breathing, Dr. Martin Tobin, testified on April 8 that even “a healthy person subjected to what Mr. Floyd was subjected to would have died.”

He said the cause of Floyd’s death was low oxygen levels caused by shallow breaths due to Floyd’s body position and the pressure of Chauvin’s knee on his neck.

“Mr. Floyd died from a low level of oxygen. And this caused damage to his brain that we see, and it also caused a PEA arrhythmia that caused his heart to stop,” Tobin said.

Tobin used detailed graphs and photos of the incident to support his contention that Chauvin kneeling on Floyd’s neck and back made it impossible for him to breathe. He asked jurors to feel their own necks as he walked through the mechanics of breathing.

He calculated that Chauvin’s left knee was on Floyd’s neck for more than 90% of the incident.

Tobin dismissed a theory presented by the defense that Floyd’s fentanyl use depressed his breathing and led to the high carbon dioxide levels detected in his blood at the hospital. That increase in carbon dioxide was because his body was deprived of oxygen for so long, Tobin testified.

During cross examination, Baker acknowledged that he felt Floyd’s heart disease and drug use played a role in Floyd’s death, but weren’t the direct cause.

He noted Floyd had severe underlying heart disease and that his heart weighed more than it should have, meaning it needed more oxygen than a regularly sized heart. He also acknowledged that methamphetamine use is not good for someone, in this case Floyd, who had bad coronary arterie.

“The law enforcement subdual and neck compression was just more than Mr. Floyd could take by virtue of his heart conditions,” Baker said.

In the end, he stuck by his initial report and doubled down that Floyd’s death be categorized as a homicide.

He said those levels of fentanyl and methamphetamine are significantly lower than the average amount seen in blood samples of DUI suspects, and much lower than post-mortem cases for individuals who die from drug overdoses.

Smock said that after reviewing the case there was no evidence Floyd died of a fentanyl overdose, a methamphetamine overdose or any sort of combination of the two, nor from a heart attack. He also ruled out excited delirium.

“He’s breathing. He’s talking. He’s not snoring. He is saying, ‘Please, please get off of me. I want to breathe. I can’t breathe.’ That is not a fentanyl overdose. That is somebody begging to breathe,” Smock said.

The defense tried to suggest during cross-examination that the combination of drugs in Floyd’s system could have played a major role in his death.

She also ruled out that the possibility of a drug overdose death.

“It was not the type of death that has been reported in fentanyl overdose, for example, where someone becomes very sleepy and then sort of gradually, calmly, peacefully stops breathing. This was not that kind of a death,” Thomas said.

“There is no evidence to suggest [George Floyd] would have died that night except for the interactions with law enforcement,” she added.

A forensic scientist for the Bureau of Criminal Apprehension, Breahna Giles, said some of the pills in Floyd’s SUV contained methamphetamine and fentanyl.

She testified on April 7 about evidence collected at the crime scene, in Floyd’s SUV and in the squad car officers tried to place Floyd.

Susan Neith, a forensic chemic at NMS labs in Pennsylvania, testified on April 7 that two pills found in Floyd’s SUV and a partial pill found in the squad car contained a fentanyl concentration of less than 1%, which she said is common.

The pills contained a methamphetamine concentration of 1.9% to 2.9%, which she described as significantly lower than “street” meth. “The majority of the time I see 90 to 100% methamphetamine,” she added.

Bradford Langenfeld, who was a senior resident in the emergency room at Hennepin County Medical Center in May 2020, testified on April 5 that officers decreased Floyd’s chances of survival by not administering CPR.

“It’s well known that any amount of time that a patient spends in cardiac arrest without immediate CPR markedly decreases the chance of a good outcome — approximately a 10 to 15% decrease in survival for every minute that CPR is not administered,” he said.

Langenfeld was the doctor who declared Floyd dead and said Floyd likely died from asphyxia. This is contrary to the defense’s angle that Floyd died of a heart attack or drug overdose.

Defense attorney Eric Nelson tried to tie Floyd’s death to using fentanyl and methamphetamine — drugs found in his system during an autopsy. Langenfeld agreed that the use of those drugs can cause shortness of breath and suppress breathing.

Floyd was in cardiac arrest for at least an hour — a half-hour as paramedics worked on him and another half hour at the hospital, where Langenfeld and his team worked on him before his death.

Seth Z. Bravinder, who drove the ambulance that transported Floyd to the hospital, testified on April 1 that Floyd wasn’t responsive or breathing when the ambulance arrived.

Video played at the trial shows Bravinder and his partner paramedic, Derek Smith, working on Floyd, placing him on a Lucas device, which does chest compressions, starting an airway, and administering an IV to deliver medicine for his heart.

They moved Floyd into the ambulance and drove a few blocks away to administer care because the initial scene was becoming so crowded.

A monitor showed that Floyd had flat-lined, meaning his heart had stopped. Bravinder said they were never able to restore a pulse.

“Did it appear to you that he was dead when you got there?” prosecutor Erin Eldridge asked.

“I wouldn’t know when I first pulled up,” Bravinder said, “but I didn’t see him moving or breathing.”

Paramedic Derek Smith appeared nervous to deliver testimony on April 1, and he repeatedly clarified that he felt Floyd was dead when the ambulance arrived.

Video showed at the trial depicts him checking Floyd’s neck for a pulse as Chauvin remained on top of him.

“In a living person, there would be a pulse there,” Smith said. “I didn’t detect one, so I thought this patient to be dead.”

“When I arrived to the scene, there was no medical services being provided to the patient,” he said.

Genevieve Hansen, an off-duty Minneapolis firefighter, testified on March 30 that she tried to render aid to Floyd but was prevented from doing so.

She said she was off work and walking home when she came upon the scene.

She said Chauvin had his hands in his pockets and looked “so comfortable” while kneeling on Floyd’s neck. She said she felt “totally distressed” when she could not get access to help Floyd.

Instead of being allowed to examine Floyd, she said now-former officer Tou Thao ordered her to get on the sidewalk, telling her, “If you’re really a Minneapolis firefighter, you know better than to get involved.”

“That’s not right — that’s exactly what I should have done,” Hansen said. “There was a man being killed, and I would have — had I had access to a call similar to that — I would have been able to provide medical attention to the best of my abilities. And this human was denied that right.”

A medical support coordinator for the Minneapolis Police Department, Nicole Mackenzie, said on April 6 that officers at the scene should have rendered aid to Floyd.

She’s involved in the medical training of MPD officers, including Chauvin, and said officers are trained to begin CPR immediately and call an ambulance if they do not detect a pulse on a subject.

Prosecutor Steve Schleicher asked her about a phrase officers are heard saying to Floyd in video footage: “If you can talk, you can breathe.”

“That would be incomplete to say,” Mackenzie explained. “Just because they can talk doesn’t mean they can breathe adequately.”