A police officer is understood to have been shot and injured during the incident in Knoxville, Tennessee. A police spokesman said: “Multiple agencies are on the scene of a shooting at Austin-East Magnet High School. Multiple gunshot victims reported, including a Knoxville Police Department officer. The investigation remains active at this time. Please avoid the area.”

Police and emergency workers raced to reports of the shooting at around 3pm local time and have blocked off access to the school and surrounding areas.

Special agents from the Bureau of Alcohol, Tobacco and Firearms (ATF) Nashville Field Division are among those at the scene of the shooting

Knox County Sheriff’s Office Spokesperson Kimberly Glenn said that someone from the department was heading to the hospital to check  the condition of the injured officer. 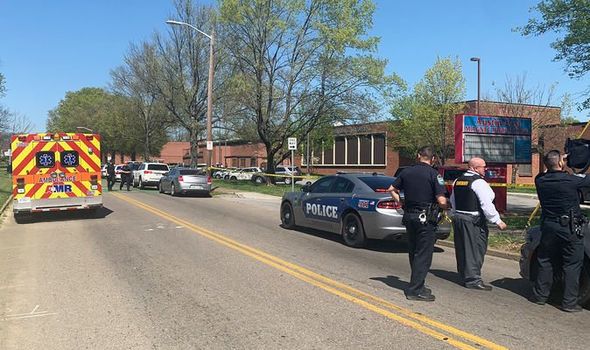 Local 10 News reported that the school had been placed under a “hard lockdown” and that parents were told to go to the back of the campus to pick up their children.

Mr Thomas said: “We are gathering information about this tragic situation and will provide additional information as soon as possible.

“The school building has been secured and students who were not involved in the incident have been released to their families.”

Knox County Schools said it had established a reunification site for parents to collect children who attend the school.

The Sheriff’s Office said there is “no active threat” at the school but the investigation remained “active”.

A string of mass shootings have unfolded across the USA since mid-March.

Last week a man opened fire at the cabinet-making plant in Texas where he worked, killing one person and wounding six others before he was taken into custody.

Eight people were shot dead at Atlanta-area spas, 10 people at a supermarket in Boulder, Colorado, and four people, including a nine-year-old boy at a real estate office in Orange, California.

Tennessee Governor Bill Lee called for people to “pray for that situation and the families and the victims that might be effected by that in our state”.

Knoxville Mayor Indya Kincannon said she had spoken to the injured officer in hospital.

She said: “He is conscious and he’s in good spirits. I met with his wife, he’s going to be OK.”

Ms Kincannon said she had thanked the officer for putting his life on the line for the students and staff at the school.

She said: “He said that he’d rather that he be hurt than anybody else.”

Vaccine passports are being trialed in the UK: Why are they so controversial?