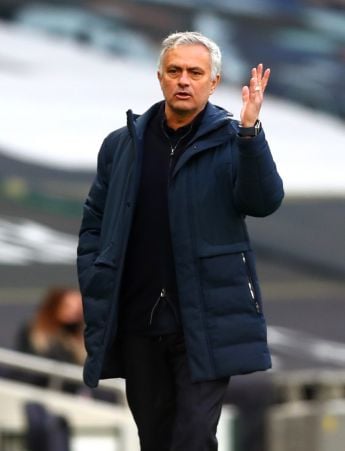 Mourinho’s side went on to squander the lead given to them by Son Heung-min as goals from Fred, Edinson Cavani and Mason Greenwood earned the visitors the points. © PA Wire/PA Images

Tottenham boss Jose Mourinho says the stats make it difficult to argue with pundits’ assessment that his side has a soft underbelly after they lost more points from a winning position against Manchester United.

Sky Sports pundits Roy Keane and Jamie Redknapp were locked in a heated debate before United’s 3-1 win in north London, with Keane saying Spurs had been “soft for the last 40 years”.

It proved a topical conversation as Mourinho’s side went on to squander the lead given to them by Son Heung-min as goals from Fred, Edinson Cavani and Mason Greenwood earned the visitors the points.

The loss means that Spurs have dropped 18 points from winning positions this season, 14 of them coming from goals conceded in the final 15 minutes and Mourinho, without wanting to give his own analysis, says that the statistics speak for themselves.

“The pundits can say what they want. Many times of course right. Sometimes wrong. That’s nature of the job,” he said.

“I can’t say what I think. You know that. You know that. You sometimes want to bring me to deep questions, to deep analysis, but then when I go, I realise that I cannot go. So this is the kind of debate for pundits, journalists to have. Is much more difficult for me to go into that.

“I would say that one thing is opinions, another thing is facts. Opinions can be discussed, but facts, they cannot be discussed.

“If you go to certain numbers, to certain stats, you arrive to conclusions, facts, and then of course pundits, people with experience, with vision, with knowledge, they can have the opinions they want. Many, many times I would agree, other times I would disagree, but I don’t want to go into that debate.”

While Spurs can barely hold on to a lead, United are making a habit of coming from behind and did so again in north London.

Central defender Harry Maguire said on the club’s official website: “First and foremost, it’s incredible and we need to stop conceding that first goal and make it a bit easier for our fans and the staff to watch.

“But we’re giving them great entertainment; it’s not like we’re trying to do that. Like I say, it’s something that shows great character and spirit. We have goals in this team and I think the three goals that we scored were high quality.

“So I think it’s really important that we know that we can always get back into the game. I think we’ve showed that this year.”

The Masters: Bob MacIntyre’s impressive Augusta debut another step in his learning process