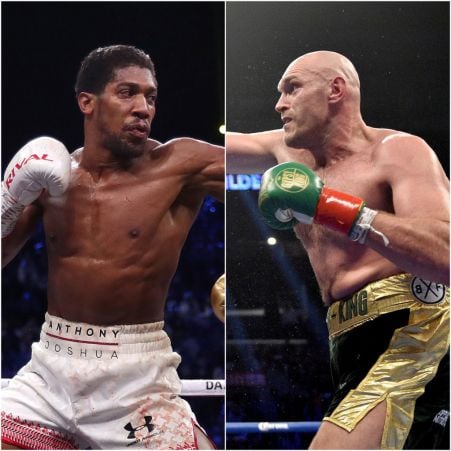 Anthony Joshua and Tyson Fury have both taken to social media in the last few days as the pair try to close in on a venue for the first of their blockbuster heavyweight showdowns this summer.

A two-fight deal between Joshua, who holds the WBA, IBF and WBO titles, and Fury, the WBC champion, has already been agreed but locations and dates are still being worked on as the parties go through the finer details.

Here, the PA news agency looks at the latest in a saga that has rumbled on for a number of months.

What has happened in recent days?

Fury posted a short video on Twitter on Friday night in which he revealed there were “some big, big offers on the table”, with “interest from Saudi Arabia, Qatar, Uzbekistan, Russia, America, England”. He added he would look at the proposals at the weekend before calling his rival a “big useless dosser”. Joshua then tweeted on Sunday evening that his management company and promoters had received “the first OFFICIAL offer” to stage their fight.

So, there’s still no official announcement then?

No. However, the noises coming from both camps – Joshua’s promoter Eddie Hearn said over the weekend “we are on the verge” of getting the fight across the line – are distinctly more upbeat than a few weeks ago. Fury’s father John cast doubt on arguably the biggest fight in world boxing right now going ahead in the next few months, suggesting the coronavirus pandemic made a bout unfeasible. He told BT Sport last month: “I just don’t think the timing is right for a fight of that magnitude with the state of the world at the minute.”

Is there anything else to know?

Hearn was typically illuminating in an iFL interview. He expects the fight to take place after Euro 2020, which finishes on July 11. His preference is for the initial fight to take place in Saudi Arabia, where Joshua regained his three major crowns by outpointing Andy Ruiz in their December 2019 rematch. But he divulged there were other offers on the table from the Middle East and added: “The whole world will stop to watch this fight and whatever country lands it has had a tremendous, tremendous result. I believe we’re super close now to getting this done.”

How soon could an announcement come?

Both fighters have started training but nothing sharpens minds like an official announcement, which could come in the next couple of weeks or even sooner. There is still a chance everything fizzles out, with Deontay Wilder waiting in the wings to complete his trilogy against Fury, having lost to the Briton last February, while WBO mandatory challenger Oleksandr Usyk is on Joshua’s radar. As Hearn said at the weekend: “We can’t do any more than we’re doing – no one’s been at fault, we’ve done everything we can and we’re in a really good place. I’m not saying any more other than cross your fingers.”

The Masters: Bob MacIntyre’s impressive Augusta debut another step in his learning process