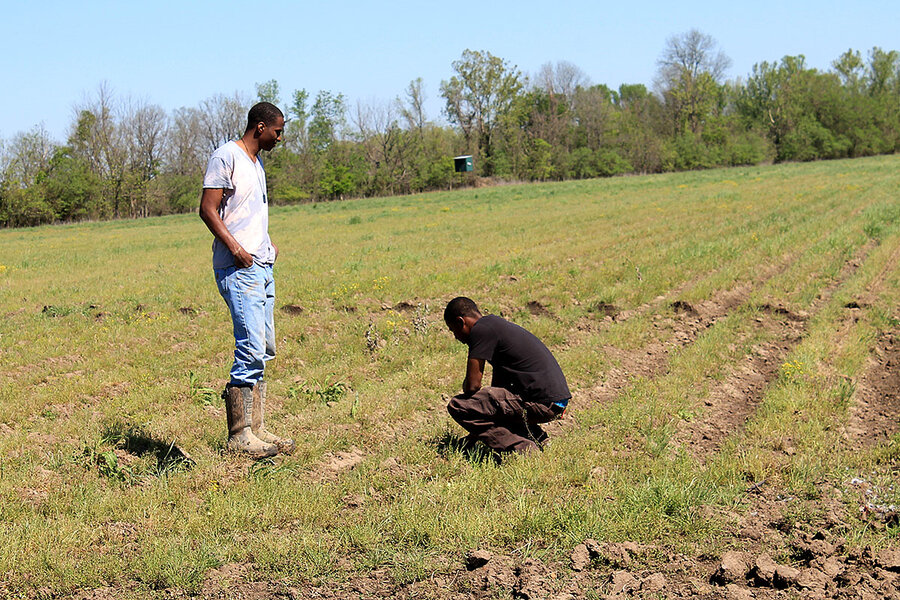 Willis and Adrian Nelson never saw their father struggle when they were children. He wouldn’t let them. Not when their father Willie would put in 20-hour days working their land near the Mississippi Delta. Not when he’d take on an extra job farming their neighbors’ land, or when he’d pick up a bus driving shift to help make ends meet.

Some days, Willie didn’t have enough time to make it home in time to have a good night’s rest. Instead, he’d take a nap in their truck.

The brothers are grown men now. Willis is 33 years old; Adrian, 29. For three generations on their property outside small-town Tallulah, Louisiana, the sweat from the Nelson family’s brows has salted the earth beneath them.

Fairness toward disadvantaged farmers is an overt goal of pandemic relief. For many Black farmers, it only begins to address the barriers and inequities they have faced for more than a century.

The family’s small-business story began in 1960, when their grandfather invested in what would eventually grow into a 240-acre farm that their family owns outright. The 40-acre plot on which their homes and equipment sit was part of the Henderson Project, which allocated land to formerly enslaved people here after the Civil War. This season, they’re also leasing up to 2,500 acres as part of their corn and soybean operations.

On paper, farming nearly 3,000 acres seems like a successful feat. But the Nelson family’s odyssey reveals the obstacles and prejudices America’s Black farmers have long faced, and which remain to this day. This year, for example, their crop loan has come through, but with a delay that has postponed getting seeds into the soil.

President Joe Biden’s far-reaching $1.9 trillion American Rescue Plan, while aimed at addressing the nationwide challenges of the coronavirus pandemic, made a pointed effort to address basic and persistent questions of fairness in agricultural policy. Of some $10.4 billion in aid targeted at the nation’s agricultural sector, nearly half will go to historically disadvantaged farmers and ranchers, according to an estimate by the American Farm Bureau Federation, an agriculture advocacy group.

The funding may be the closest the federal government has come to reparations for Black Americans in farming since the Civil War era, when Union Army Gen. William T. Sherman issued Special Field Order No. 15 in January 1865, raising hopes for formerly enslaved people to receive “40 acres and a mule.” Despite that, the funds are too little, too late, some farmers say.

“It’s another drop in the bucket,” Willis Nelson says.

In fact, only a sliver of today’s American farmers and ranchers identify as Black, U.S. Department of Agriculture figures show. Out of 3.4 million farmers countrywide, about 45,000 are African American. That’s down from roughly 1 million a century ago, largely because of Jim Crow policies and a predatory loan process. In 1910, Black farmland ownership hit its peak at 16 million to 19 million acres, representing about a 14% chunk of U.S. agricultural land, according to the Census of Agriculture. Today, Black farmers own less than 1% of functionable U.S. farmland, with more losses accruing annually.

Scholars at the Harvard Law School’s Center for Health Law and Policy Innovation have estimated that Black farmers lost $250 billion to $350 billion in wealth and income due to policy over the last century. That loss is equal to 10% of total Black wealth, the researchers estimate.

The hurdles that Black farmers have faced have ranged from the risks of racist violence to being largely shut out of a growing trend toward corporate-scale farming. Another factor has been limited access to estate planning, in a line of work where it can be vital to maintain a clear title and to prevent parcels of land from being split up.

“Everything is a little too late,” says Angie Provost. In 2014, she and her husband, June, lost their 5,000-acre sugar cane farm in New Iberia, Louisiana, in part because federal loans arrived late. Like the Nelson family, the Provosts have found themselves asking their fellow white farmers if they received their loans late in the season. “Those are the things that I think Black farmers have been dealing with for decades, for centuries, for generations. It’s been recognized of late because of the grassroots network that are being created right now through our stories.”

The degree of systemic inequity seems to hang over their heads, Ms. Provost says. In some ways, it’s everywhere. She lives five miles from the family descended from people who once enslaved her own family’s forebears.

“It’s a known fact that we get our loans later than most people,” Willis Nelson says of how many Black farmers experience the loan process.

Most American farmers operate on thin margins. They depend on loans, whether they’re applying through the USDA or a bank. The sooner they get credit during the growing season, the better the chances of eventually paying the loan back, which improves their credit for the next growing season.

Last year, the Nelson family had their entire crop loan paid off by November. In December, they applied for a loan for the next growing season. Weeks turned into months and still no word came from the loan officer. The process dragged on until late March – into planting season.

Their white counterparts’ corn is close to knee-high at this point in the season. Meanwhile, the Nelson family’s corn is just beginning to sprout. They’ve yet to finish putting in their crop.

“I was always going to get approved,” Willis Nelson says of the annual loan application process. “The other guys we know, they’ve already got their loan, seed, chemicals, stuff like that.”

He shakes his head wearily.

The promised relief is welcome, to be sure. An estimated $4 billion of the American Rescue Plan money will be used to cover up to 120% of disadvantaged farmers and ranchers’ outstanding debt. Another $1 billion is intended to be used for technical assistance, grants, training, education, and access in helping farmers and ranchers acquire land. This relief will encompass Native American, Hispanic, and Asian American as well as Black farmers.

The initiative will be run by the U.S. Department of Agriculture, dubbed the “last plantation” in a critique by the National Black Chamber of Commerce as then-President Barack Obama nominated Tom Vilsack to lead the federal agency in December 2008. Mr. Vilsack was confirmed, again, in February 2021 to lead the USDA during the Biden administration.

“Should have been done a long time ago”

The American Rescue Plan’s farm relief “is something that should have been done a long time ago, based on the fact that we’ve lost so much land,” says Howard Gunn Jr., the former president of the Florida Black Growers and Agriculturalists Association. He also thinks it’s an opportunity to mend old wounds.

The Biden plan isn’t the first attempt at righting slavery’s wrongs via agriculture. But it is, minority farmer advocates say, the most cleareyed attempt in recent memory. In 1997, the USDA settled Pigford v. Glickman, the largest class-action civil rights lawsuit in American history. It alleged that the USDA discriminated against Black farmers and ranchers from 1981 to 1996 by denying them access to loans and credit solely on the basis of race. A mere 371 Black farmers at the time of the settlement received payment.

In the Nelson family’s case, their father Willie received $50,000 three years after the settlement.

With the promised new aid, June Provost sees an opportunity to hold the administration’s feet to the fire for equitable treatment. In his mind, part of that idea would mean replacing loan officers at the USDA, many of whom were involved with the discrimination exposed by the Pigford lawsuit. The next step, Mr. Provost continues, would be passing the Justice for Black Farmers Act, a recently proposed piece of legislation that would create a land grant program as a means of encouraging young farmers like the Nelson brothers to either enter the industry or maintain their own operations.

For the time being, though, “there’s an opportunity with this bill – the opportunity to give us a chance to get on equal ground,” says Adrian Nelson of the Biden stimulus for disadvantaged farmers. But he admits “it ain’t really the push that’s needed to level the playing field.”

Angie Provost seconds that sentiment. As she says, the USDA is often referred to as the “people’s department.” If she were provided the opportunity to speak in front of the department secretary, there’s one question she hopes to have the chance to ask: “Who do you consider as people?”

‘Real journalism.’ Inside the battle to save local newspapers.

The case against packing the court