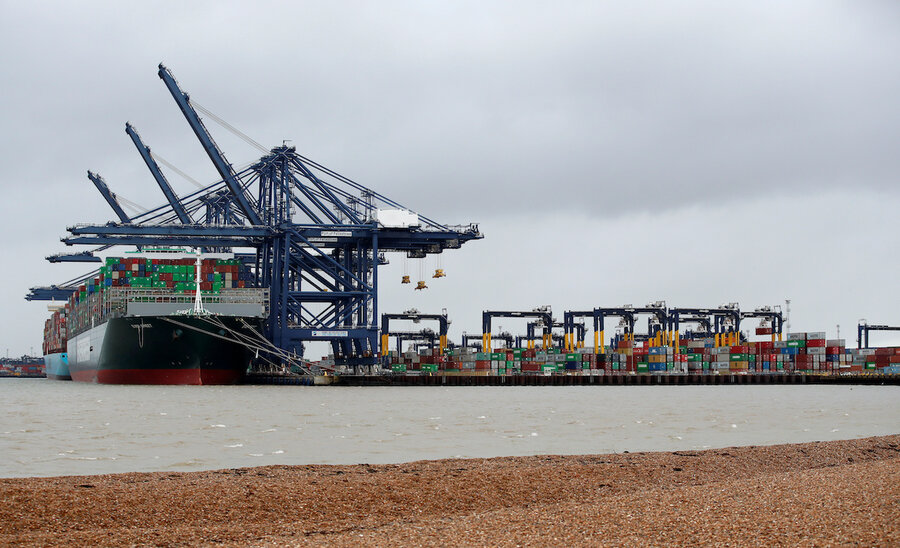 “There seems to be a trap in every corner,” lamented managing director Simone Cozzi, adding the company’s hygiene officer – a trained veterinarian – now needed to spend extra time with them when filling in the necessary paperwork.

Mr. Cozzi said delays at customs points had also added to transport costs because drivers want more money to compensate for wasted time, while air shipments can be held in a U.K. airport for 24-plus hours compared to only 30-45 minutes in Hong Kong.

The new documentation requirement is one example of the extra cost and complexity that firms across continental Europe face in order to reach British customers since Jan. 1, adding to the disruption caused by the COVID-19 pandemic, driving trade volumes between the United Kingdom and the European Union lower.

“At the moment it is actually easier to ship things to Asia,” Mr. Cozzi said.

The Dec. 24 deal reached between Britain and the E.U. after years of wrangling over post-Brexit trade terms at least meant goods trade – roughly half the total $900 billion of annual E.U.-U.K. commerce – was spared from tariffs and quotas.

But January trade volumes crashed as difficulties with the new rules combined with a hit from pandemic restrictions and substantial stockpiling by firms on both sides of the English channel in late 2020 in anticipation of trouble.

U.K. data released on Tuesday showed only a partial recovery in February, with British goods exports to the E.U. 12.5% below year-ago levels and imports 11.5% down. Data from Italy, France, and Germany – Britain’s biggest E.U. trading partner – have all shown falls in the volume of U.K. trade in February.

Italian farmers association Coldiretti cites such hurdles as endangering 3.4 billion euros of Italian agri-food exports, pointing to a 38% drop in exports of foodstuffs to the U.K. in January and almost 14% in February.

Some companies have found work-arounds – albeit at a cost.

Italian prosecco supplier Serena Wines 1881 must store bottles destined for Britain on costlier, fumigated pallets in their own corner of its warehouse in the northeast Italian town of Conegliano.

“These first months have been hectic, hellish for everyone,” said export manager Nicola Piovesana. “Delivery times are now longer, now it takes 2 weeks to get to the [U.K.] client, while before it took one week at the most.”

With Britain its second largest export market after Germany, Serena Wines has bent over backward to secure business with U.K. hotels, restaurants, and caterers by revamping internal customs processes and dedicating one staff member to Britain alone.

But the pallet issue is typical of the type of knock-on impacts that companies are now having to deal with: In this case, trade with any non-E.U. country means international rules on anti-pest treatment of wood packaging apply.

Ms. Piovesana says the fumigated pallets cost about 9.50 euros ($11.34) each, almost 20% more than the regular ones. U.K. guidance is for firms to consider switching from wooden to plastic pallets.

Swedish wood products supplier Vida Wood, riding the wave of lockdown-induced booms in DIY home improvement activity, had an existing U.K. subsidiary that now takes care of all the customs hassle and bills the British end-customer from there.

“So there is more administration for us,” said CEO Karl-Johan Löwenadler, acknowledging that solution would not be available to smaller companies with no U.K. presence like its 11-person operation in Billericay, 25 miles east of London.

While stories of major disruption are common among goods exporters across different sectors in Europe, the unanswered question remains what the long-term impact on trade will be.

A U.K. government spokesperson said the February data showed “welcome growth” in the value of trade with the E.U. from January, suggesting most traders and hauliers were now adapting.

“It’s premature to make any firm judgments on the long-term impacts of our new trading relationship with the E.U., especially with the pandemic still ongoing,” the spokesperson added.

The Bank of England expects U.K.-E.U. trade in goods and services to fall by more than 10% in the long term due to post-Brexit restrictions, and for British output to be around 3% lower than if the government had agreed to the E.U. rules needed for a frictionless trade deal.

Moreover, exporters to Britain face added complications in the coming months, with extra paperwork for U.K. food imports such as meat, fish, and cheese needed from October and a further raft of checks to take effect from January 2022.

A group of lawmakers and heads of business will hold a first “evidence session” on Brexit’s trade impact on Thursday with a view to making recommendations on possible improvements.

Yet even before Brexit, the E.U.’s share of Britain’s trade had already been declining for years, with figures quoted in a U.K. parliament report last year showing U.K. exports to the E.U. made up 43% of all its exports in 2019, down from 54% in 2006.

Some major European exporters are resigned to the idea that, while the early disruption will eventually settle down, the logic of a Brexit deal that spurned closer ties will inevitably lead to a further drift southward of U.K.-E.U. trade volumes.

It could already be happening: A December 2020 survey of members of Germany’s BGA trade association showed 1 out of 5 companies were reorganizing supply chains to swap out British suppliers in favor of those in the E.U. single market.

How this hotel offers African migrants hope in the Canary Islands