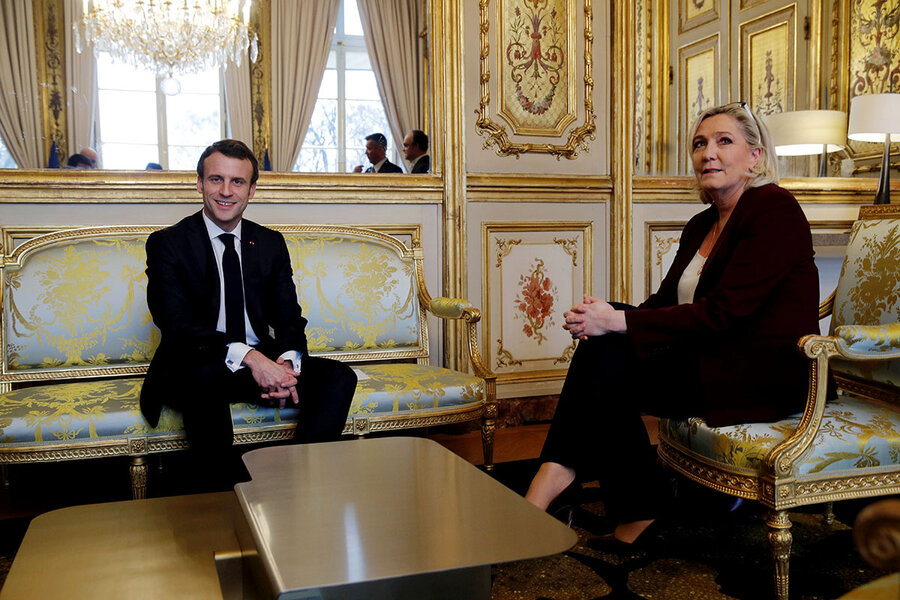 As next year’s presidential elections in France approach, the two front-runners are trying on each other’s clothes.

Marine Le Pen, traditionally a candidate of the extreme right, is seeking more moderate voters by steering her party, the National Rally, toward the middle ground of French politics. More surprisingly, perhaps, President Emmanuel Macron is veering sharply rightward, shocking many of his supporters and raising questions about the boundaries of acceptable political discourse.

“We are seeing [National Rally] ideas have become normalized and a structural part of mainstream debate,” says Gilles Ivaldi, who teaches at Sciences Po and the French National Centre for Scientific Research in Paris. “That is a reality.”

The French president and his far-right competitor for the 2022 elections are adopting parts of each other’s platforms, throwing into question just what topics are acceptable in the mainstream.

Two incidents in recent weeks have crystallized the new tone of Mr. Macron’s government, which he has always characterized as neither right- nor left-wing.

In a broadcast debate with Ms. Le Pen, Interior Minister Gérald Darmanin accused her of being “soft” on radical Islam, vaunting the muscular legislation on Islamist “separatism” that he presented to Parliament on Feb. 1.

A few days later, another minister called for an investigation into “Islamo-leftism” in French universities, using a phrase commonly heard only in extreme right-wing circles, which she said was “poisoning society.”

“The government is courting public opinion in some pretty nauseating places,” said the president of the Sorbonne University, Jean Chambaz. “They should be managing the [COVID-19] crisis instead of preparing for the elections.”

Borrowing from the far-right

Almost since Ms. Le Pen’s father, the Holocaust-denying Jean-Marie Le Pen, founded the National Front (since renamed the National Rally), mainstream politicians in France have been borrowing the far-right’s rhetoric on its key issues, immigration and law and order.

In 1990 President François Mitterrand, a Socialist, said France had gone beyond “the threshold of tolerance” on immigration. A year later his center-right rival, former President Valéry Giscard d’Estaing, warned of a foreign “invasion.”

Another center-right former president, Nicolas Sarkozy (to whom Mr. Macron is known to turn regularly for advice), wanted to ban Muslim women from wearing their veils in public, and a Socialist interior minister, Manuel Valls, once called for the expulsion of all Roma from France.

World events have also played their part in the normalization of attitudes that were once beyond the pale, suggests Thomas Guénolé, a political analyst.

“After World War II, it was impossible to imagine a far-right party after France’s participation in the Holocaust. No one tolerated extremism,” he says. “But the nationalist movement was always present, and the Sept. 11 attacks created a new anti-Muslim paranoia. It became acceptable to invite extreme voices onto French TV and in politics. The general atmosphere completely changed.”

Though Mr. Macron campaigned as a fresh, young reformist progressive for the 2017 presidential elections, he has lost much of his bloom, worn down by the protests of the Yellow Vest social movement in 2018-19 and then by his awkward handling of the pandemic.

His government has, in recent months, adopted harsher rhetoric on hot-button issues such as Islamism, secularism, and law and order, positioning itself as the guardian of traditional French values.

The so-called global security law, still before Parliament, offers police much greater powers of mass surveillance than they currently enjoy, including the use of facial-recognition software, and would also outlaw the “provocative identification” of police officers in photos or video, even those exceeding their authority, so as to protect their “physical and psychic integrity.”

Another draft law, designed to “strengthen republican principles” according to its title, is aimed at “Islamist separatists,” banning home schooling, giving the state more control over religious organizations’ funding, and allowing the authorities to close or remove the leadership of mosques. Critics complain that the law stigmatizes France’s 5 million-strong Muslim community.

Some observers suggest that Mr. Macron is concentrating on such issues as a way to distract attention from his political difficulties. But such tactics have broader implications, says Emiliano Grossman, a political analyst. “Once you make far-right arguments acceptable, they stay acceptable,” he says. “So even if it is a short-term [electoral] strategy, it has long-term effects.”

As Mr. Macron seeks votes across the aisle, Ms. Le Pen has continued her push to give her party a more moderate image by rebranding it under a new name and logo, hiring a younger and more diverse staff, and publicly shunning her father in a bid to shake off the neo-fascist image the party had projected.

She has also abandoned some key planks of the former National Front’s platform, recognizing that they were widely unpopular. She no longer advocates leaving the European Union, nor its common currency, the euro; she has moderated her opposition to the free flow of European citizens around the Continent. Ms. Le Pen has even presented herself as an environmentalist, in what observers see as an effort to appeal to Green party voters disillusioned with the president.

Her efforts have borne fruit, up to a point. In a March poll for the Journal du Dimanche weekly, 43% of respondents said they agreed with her political program, but only 28% said they shared the party’s values.

She has been more successful, it seems, in helping to move the center of gravity of French politics closer to her outlook. Even Mr. Macron, elected as a wholehearted supporter of globalization, now proposes the sort of “regulation of globalization and economic patriotism” that Ms. Le Pen claimed as the heart of her ideology recently at a meeting with the Anglo-American Press Association in Paris.

“The immense majority of French people share our ideas, which are perfectly reasonable,” she said. “So our political opponents are having trouble today not stepping into our territory.”

Mr. Macron’s election in 2017, at the head of La République En Marche, a brand-new political organization that won votes from traditional supporters of both left-wing and right-wing parties, shattered France’s two-party system. That has left large numbers of voters without any party affiliation – a situation that both Mr. Macron and Ms. Le Pen hope to exploit.

It is not clear, however, that either of them will be able to do so by next April when the presidential election is due. Too many people who voted for Mr. Macron in the last presidential elections are too disappointed in his performance to vote for him again; too many of the moderates whom Ms. Le Pen would like to seduce are not persuaded that her new image is more than skin-deep.

That could lead to widespread abstention, some observers predict. “I’m seeing it in the latest opinion polls and hearing it all around me,” says Mr. Guénolé, the political scientist. “More people are saying that if it comes down to Macron and Le Pen in the second round [of the presidential election], they’ll just stay home.”

How this hotel offers African migrants hope in the Canary Islands