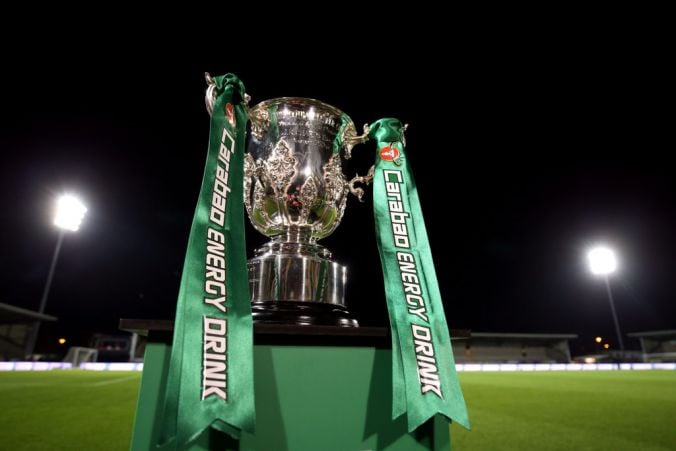 Tottenham and Manchester City fans have dismissed a move to allow 2,000 supporters from each club to attend the Carabao Cup final as “political grandstanding”.

A limited number of spectators will be able to attend the game at Wembley on April 25 under the Government-led Events Research Programme (ERP), a pilot scheme looking at how to get spectators safely into venues amid the coronavirus pandemic.

But a joint statement released by the Tottenham Hotspur Supporters’ Trust and the Manchester City Official Supporters Club has condemned the lack of fan involvement in the decision-making process and questioned the validity of what it calls “a clinical trial” after the clinically extremely vulnerable were barred from applying for tickets.

The statement said: “The Carabao Cup Final is now not a sporting event, and headlines that it represents ‘the return of fans’ are misleading. The event is a football match played as the centrepiece of a scientific experiment in front of some spectators, a small proportion of whom may be fans of the clubs involved.

“Given the mix of spectators, the crowd will not behave as a normal football crowd behaves, and so researching its movement and behaviour is of limited value.”

The fans’ groups, while acknowledging the difficulty of the situation, have also criticised “inaccurate assumptions” about where fans of the respective clubs live and attendant travel restrictions, and a charge of up to £50 for tickets when those for local residents, key workers and corporate clients are complimentary.

The statement continued: “A competition final is not a standard sporting event. The choice of this event as part of the Events Research Programme has not been driven by practical considerations, but by political grandstanding.

Following last week's confirmation that our @Carabao_Cup Final tie against @ManCity has been approved as an official pilot event with fans in attendance, we are now pleased to provide further details on the ticket application process ⤵️#THFC ⚪️ #COYS

“An event staged in front of 4,000 fans from each club could have been possible if input and advice from supporter groups and clubs had been sought.”

Meanwhile, the decision to exclude clinically extremely vulnerable supporters is “direct discrimination”, according to a Tottenham disabled fans’ group.

Details of ticketing and safety protocols for the match were announced on Tuesday, but the ERP does not allow for those classed as clinically extremely vulnerable (CEV) or those living with them to attend.

SpursAbility said in a statement released to the PA news agency that it was extremely disappointed by the decision, and asked for it to be reviewed.

“A number of our members and supporters will fall into this (CEV) classification under recent Covid-19 guidance and have also endured long shielding periods,” the statement read.

“However, most of them will have had their first and second vaccinations and are at considerably lower risk than those who are yet to be vaccinated.

“Government guidance places those aged 70 or over at an equal or higher risk category yet there is no exclusion issue for anyone in these higher-risk groups.

“The policy adopted for this match is a direct discrimination toward many disabled supporters.”

Level Playing Field, the charity which campaigns and advises on disabled access to sports venues, said the ERP decision created a “very credible risk” that sections of the football community will be excluded from attendance as lockdown eases.

“The actions around excluding clinically extremely vulnerable people detracts from the message of tackling discrimination, promoting equality and devalues the importance of personal choice,” its statement read.

Louise Rubin, head of policy and campaigns at disability equality charity Scope, said: “Disabled people have been among the hardest hit by the pandemic and, as the UK begins to recover from coronavirus and open up again, they should be able to access sport and other social events just in the same way as everyone else.

“Disabled people should be able to make their own choice about what’s right for them, rather than being subject to arbitrary and discriminatory blanket policies.

“We urge the government and sports organisations to consult with disabled fans to make sure nobody is unfairly excluded.”

The Department for Digital, Culture, Media and Sport (DCMS) said in a statement: “These pilots are the first steps to helping all members of the public safely back to mass events.

“While they were designed to be as inclusive as possible, we have been advised that it would not be suitable on health grounds for the Clinically Extremely Vulnerable to attend such pilot events and potentially be put at greater risk of transmission.”

Those fans eligible for a ticket must take PCR Covid tests before and five days after the final, and must also travel to a local lateral flow testing site in order to provide proof of a negative test within 24 hours of the match.

This proof will enable them to gain entry to Wembley, and in the case of City fans will be needed to access specially-chartered trains and coaches heading to London from Manchester.

City said 1,500 spaces would be available via these trains and coaches, with a further 250 car parking spaces at Wembley being made available.

The final 250 tickets would be sold to City fans based in London and the Home Counties, who would need to make their own travel arrangements.

The Carabao Cup final will be the first outdoor sports pilot event under the ERP to feature supporters of the teams involved. In addition to those 4,000 fans, 4,000 tickets will be distributed to residents and NHS staff in the area around Wembley.

There will be 4,000 spectators at Sunday’s FA Cup semi-final, but these will be restricted to local Wembley residents and NHS staff.

The success of these pilot events – plus others including the World Snooker Championship, the FA Cup final and England’s group games at Euro 2020 – will be key steps along the road to allowing supporters back into venues in financially-viable numbers from June 21.

Ten sports governing bodies wrote to political leaders last week endorsing the use of a Covid certification system, under which entry to an event could be gained if proof of vaccination, a negative test or antibody immunity was provided.

Celtic striker Odsonne Edouard courted by both Arsenal and Leicester