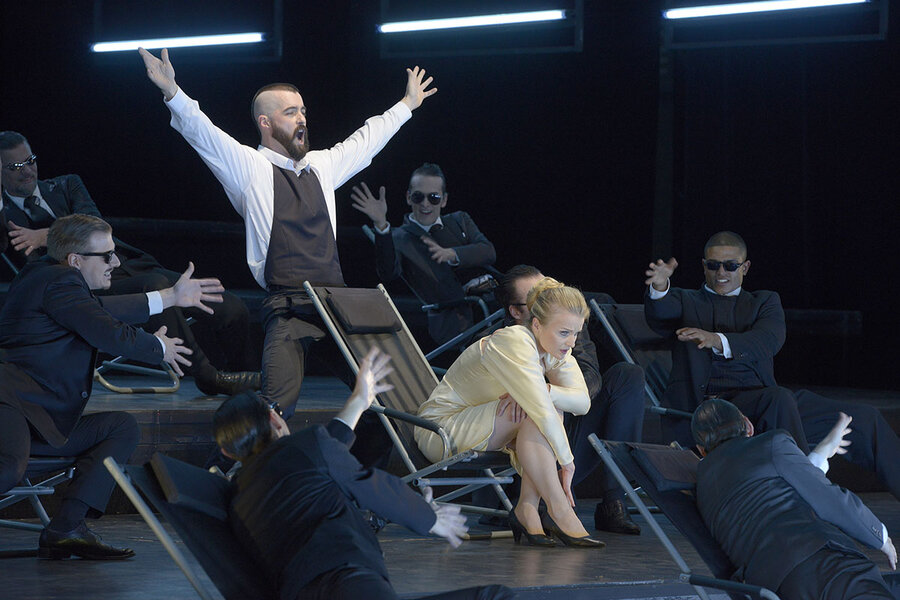 Seth Carico began singing in the Tennessee mountains of his youth. As an adult, he’s decided to practice his craft in Germany.

About a third of all opera performances worldwide take place here, and Germany has cultivated a society where children are schooled in music theory and adults commonly budget for opera season tickets.

“Berlin is a city where I’ve gotten into taxis and said, ‘Take me to Deutsche Oper,’ and the driver launches a discussion about ‘Don Giovanni,’” says Mr. Carico, a salaried singer at Berlin’s premier opera company. “Music is baked into society here in a way I haven’t experienced in America.”

Public spending reveals what a society thinks is important. With native sons like Bach and Beethoven and a history of prioritizing the arts, Germany has its opera singers humming with paychecks that keep coming.

That kind of cultural reverence comes with benefits. As the pandemic shut down performance centers around the world, German opera grieved over canceled international tours and plans to stage joint Japan-Europe productions of “Madama Butterfly.” Yet while American cultural institutions large and small struggle with budget shortfalls, Germany’s musicians and artists are finding that a tradition of state funding of culture has installed a floor beneath them. Their financial situation bolsters Germany’s status as a keeper of the arts – but also makes it harder for needed reforms to take root.

“What we learned in the crisis was that the public purse was very much willing to keep [opera] alive in Germany,” says Dieter Haselbach, a German cultural sociologist and consultant. “But in the long run the state-funded system covers a structural crisis which is an oversupply of theaters and opera houses, with [growing] competition from digital performances.”

Kids sing along to Mozart

Opera may be regarded by some as an elitist relic predating a more youth-oriented culture, and in the United States opera attendance has been declining for years. But if you’re a schoolchild in Berlin, you might hear Mozart’s arias by grade 8 and study musical composition by grade 9. Nearly half of German preteens play an instrument, according to the Association of German Music Schools.

Mr. Carico, a bass-baritone, remembers a recent performance of Mozart’s “The Magic Flute,” attended by schoolchildren. “When Papageno came on, the entire audience of kids started singing along,” he says. “I remember thinking, ‘Oh, this is different.’ The art of music has been part of Berlin for longer than America has existed.”

With Germany’s long history of composers and musicians revered around the world, arts appreciation has been institutionalized. The home of Bach, Beethoven, and Wagner has always thrown its support behind classical music, and after the fall of the Berlin Wall a united government invested in capital projects and hiring that helped ensure opera houses in the former East Germany would thrive.

Today, state and federal governments provide the majority of funding for 80-some opera houses; in 2018, they supplied roughly $2.7 billion of the nearly 3.5 billion euros required to fund music and theater in the country. In contrast, arts funding in the U.S. is almost completely dependent on private sponsorship. During the pandemic, Germany has committed an additional 2 billion euros to arts funding, supporting commercial art galleries and museums, cinemas and music clubs.

Nearly every midsize German city has an opera house, which has gifted fans an enviable set of statistics. Germany is home to 1 of every 7 of the world’s opera houses, and nearly 4 million people attended the opera during the 2018-19 season.

Organizations like the Metropolitan Opera in New York, arguably the world’s most prestigious and important opera venue, quickly canceled seasons and furloughed or laid off workers last spring. But German opera houses could tap into Kurzarbeit, a government program which helps employers pay worker salaries to avoid layoffs. In-house artists could collect a good portion of their pre-COVID-19 salaries while waiting for seasons to get back on course, and freelancers could apply for grants based on 2019 income.

Artistic Director Peter Theiler recalls the days before the coronavirus pandemic closed his Saxon State Opera in Dresden. “We were just putting on the biggest production [known to the opera world], the Gurre-Lieder by Arnold Schönberg,” says Mr. Theiler. “More than 120 musicians and 300 choir singers. It was crazy.”

Within two months, the opera was shut down, forgoing nearly all revenues from its 270 annual performances.

After a shutdown period, the house was selected to experiment with a limited season to audiences of about 300, with hygiene plans that conformed with accident-insurance laws. That left 1,000 empty seats per performance and a huge drop in revenues.

“The state financed us through this situation,” says Mr. Theiler. “We aren’t in danger of going broke because there is a vested interest in keeping us afloat and running, so that we can be here as soon as we are allowed to re-open.”

More than a year into the pandemic, the Saxon State Opera hasn’t let anyone go, keeping about 800 musicians, singers, dancers, administrators, and other workers, including the house tailor. Freelancers on contract were also paid.

They are now waiting, and rehearsing in coronavirus-tested groups, for a return to normal.

Too big to innovate?

Aside from the upsides of surviving a once-in-a-lifetime pandemic, some say a publicly funded opera system can result in a large and bumbling bureaucracy that’s resistant to change.

Opera is an art form best viewed live. The audience can react not only to the voices, but also to the live orchestra and the physical vibration of the music in a way that’s not possible with a CD recording. Yet during COVID-19, audiences have acclimated to digital and virtual versions of the real thing. They may be reluctant to return once the pandemic is over, says Mr. Haselbach, the cultural sociologist.

Older audiences may be “too scared” to return to theaters, says Mr. Haselbach. And, opera houses that rely more on government funding than ticket sales may “not sense the crisis. A system like this is big and thriving, and lots of people are employed and involved. But innovation comes from the outside. From the fringes.”

German audiences also like the status quo, which keeps them flocking to performances of classic works by Wagner or Mozart. Only the smaller, more nimble houses can reliably and regularly stage new pieces.

Further, in the U.S., museums and theaters may close, and people can raise bold new ideas often without sparking protest. In Germany, change is typically accompanied by a furor that “the middle class and cultivated peoples are being robbed of something,” says Mr. Haselbach. “I feel the cultural scene is suffocating itself.”

Alexandra Hutton is happy to leave debates over the economic future of German opera to the administrators and experts. An Australian soprano, Ms. Hutton relocated to Germany in 2013, having won a competition that secured her a young artists’ spot at the Deutsche Oper Berlin.

Joining the ensemble allows her to collect a salary, but also freelance her talents.

Worldwide, “for most working opera singers, the pandemic pulled the plug out of the wall,” says Ms. Hutton. “But I’m so lucky to be in Berlin – I know the industry is going to be around. There’s money coming in to pay my rent and keep me comfortable until everything opens back up again.”

Bass-baritone Milan Siljanov was to debut in “Carmen” as Escamillo in Dublin when the coronavirus came roaring through Europe. He left Ireland in a hurry, and though he lost freelance income, his status as a member of the Bavarian State Opera in Munich means he’s privileged and can pay basic expenses.

He’d debated freelancing a few years ago at the urging of his manager. Now, he notes that a number of high-profile men and women, who previously commanded large contracts for leading roles, are asking around German houses about ensemble roles.

Mr. Carico, the Tennessean, is also gainfully employed and grateful. He recalls time he spent in Detroit, Michigan, as a young opera singer. He and fellow singers would go into schools to educate children about opera, their visits funded by company and private donors. In down times, such “luxuries” are first to go. “It’s such a tightrope when the stock market gets to decide whether people are making private donations,” says Mr. Carico.

“Being a middle-class opera singer is a possibility in Germany. That opened my eyes to what being in this country can be.”