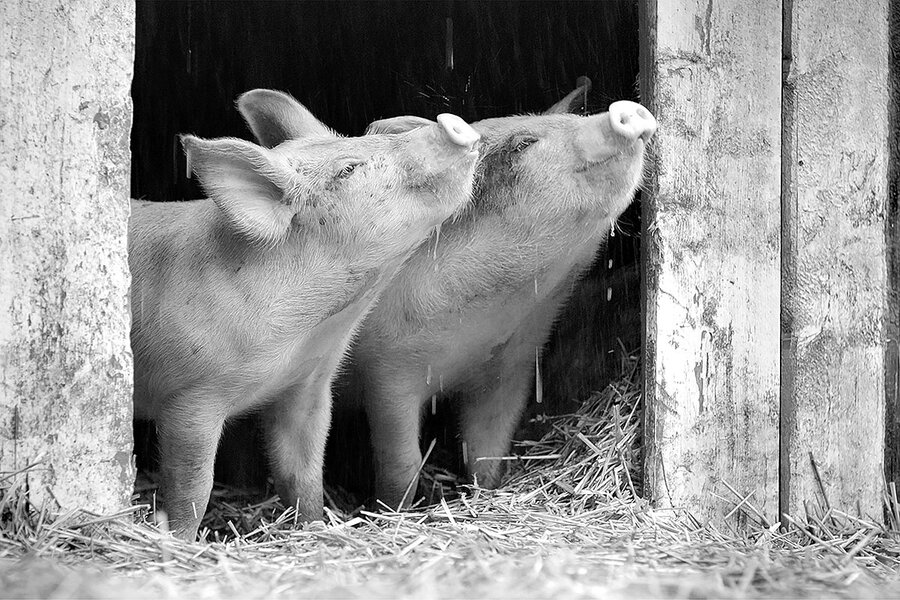 “Gunda” is one of the most immersive and eye-widening documentaries I’ve ever seen. Director Victor Kossakovsky and his minimal crew stealthily inserted themselves into the lives of a flock of chickens, a herd of cows, and, most prominently, a sow and her piglets. Shot in long, slow takes in lustrous black and white, with no humans in sight and no music or narration on the soundtrack, “Gunda” draws you into its way of seeing with a hushed reverence. The lives of these animals, filmed on a series of farms and sanctuaries in Sweden, Britain, and Norway, are not sentimentalized or aestheticized or rendered in that cutesy anthropomorphic way that mars most so-called nature documentaries. We experience their exploits with fresh eyes and minds.

I don’t think my heightened response to “Gunda” – the name bestowed by the farmers on the Norwegian sow – is because I’ve never spent much time on a farm. I would imagine this film functions just as powerfully for people with the curiosity to truly see what is before their eyes in all its transcendent ordinariness.

The sequences with the cows allow us to contemplate them close up, in repose. Standing stock-still, looking straight into the camera, they appear to be observing us. Most of the scenes with the chickens feature a solitary, one-legged stalwart whose hopping through the tall grass is ultimately impeded by an impassable wire fence. You can’t help but admire this bird’s pluck.

Can a documentary about farm animals be as captivating as a movie about people? In this Oscar-shortlisted film, the pigs steal the show.

But the heart of the movie, which was shortlisted for an Oscar, is Gunda and her dozen or so piglets, who are first shown shortly after their birth. Inside the barn’s darkened enclosure, the piglets squeal for milk, stumbling and scampering in the hay. (The wriggling runt of the litter steals the show.) Later on, in one of the film’s most beautiful and comical sequences, a couple of excited piglets emerge from the barn during a downpour and, perhaps for the first time in their lives, tilt their snouts to the sky as they attempt to drink in the rain.

Until the film’s closing moments, nothing overtly dramatic happens with the pigs – and that’s the point. Kossakovsky wants us to see the delicacy in the dailiness of their lives, filmed unobtrusively over what appears to be several months. Gunda takes her brood out into the fields, suckles them, nudges the stragglers. Their grunts and squeaks combine with the sweep of the wind and the buzzing of flies and chirping of birds. The soundtrack to this film is acutely attuned to the landscape.

I’ve mentioned that Kossakovsky scrupulously avoids cutesifying the animals, and yet, true as this is, it’s impossible not to emotionally connect with them, most especially the pigs. Gunda’s intense attachment to her piglets transcends her barnyard surroundings. It’s like watching a paean to motherhood. The fact that this does not seem absurd to us, quite the contrary, is a testament to the film’s embrace of the natural world.

Does this mean that “Gunda” also functions as a covert piece of vegan propaganda? I don’t think so, although it will likely be interpreted by some in that way. What it does express, in the most unadorned and ultimately affecting of ways, is the sentience of these creatures. It has sometimes been put forward as scientific fact that animals, unlike their human counterparts, have no real conception of death or even loss. Anyone who has ever spent time with animals, or loved or been loved by a pet, knows this is false.

This is why, at the end of the film, the separation of Gunda from her brood is so quietly heartbreaking. As she traces and retraces her steps, attempting to make sense of the insensible, grunting to elicit the companionable squeals that never come, we know exactly what she is feeling. Animal consciousness is a vast mystery, but in this moment we are all made one.

“Gunda,” which opens in select theaters on April 16, is rated G.