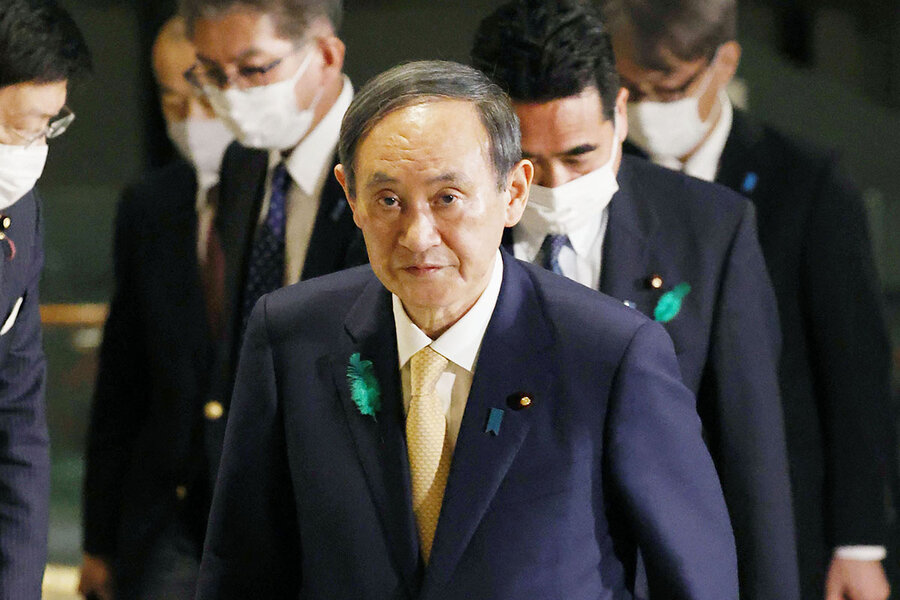 When Japanese Prime Minister Suga Yoshihide becomes, on Friday, the first foreign leader to meet with President Joe Biden at the White House, it will break a long and pretty consistently kept tradition.

The first foreign leader to visit the new U.S. president is a distinction generally reserved for the British prime minister to highlight the “special relationship.” Making Mr. Suga the first says everything about America’s shifting focus from the Atlantic to the Pacific.

A reordering of U.S. global priorities was also on display this week as President Biden announced the definitive withdrawal of U.S. troops from Afghanistan by Sept. 11 – the 20th anniversary of the terrorist attacks that launched America’s longest war.

Japan has been an underappreciated U.S. ally. With a White House invitation, President Joe Biden is underlining the two countries’ common principles as a crucial counterweight to China.

But Mr. Suga’s invitation underscores how Japan, long a stalwart if low-profile and underappreciated ally, is emerging as perhaps America’s key partner in what regional experts say will be the defining geopolitical struggle of the 21st century: the great-power competition between the United States and China, and their divergent economic and political systems.

“The Biden administration has clearly understood that the center of gravity of its foreign policy is the Indo-Pacific, and competition with the Chinese for economic and political influence in the region,” says Lisa Curtis, who served for four years as the National Security Council’s senior director for South and Central Asia in the Trump White House.

For others, just as important as the economic and political dimensions of the U.S.-Japan relationship will be the common principles the two allies promote as an alternative to China’s very different vision for organizing and leading the region.

“It’s the compound of geopolitics and principles that makes Japan America’s last great hope and the quintessential and essential ally in the region,” says Henry Sokolski, executive director of the Nonproliferation Policy Education Center (NPEC) in Washington. “As the geopolitical future goes, so goes the future of self-government, [which] depends on the strength of our friendship with Japan – just as it used to with Great Britain.”

Japan has been a U.S. ally since its defeat in World War II, but its importance to Washington for decades centered on its hosting of U.S. troops and its membership in the elite club of wealthy Western democracies and liberal economies. Tokyo was a quiet, stable partner – the world’s third-largest economy with deep pockets and a willingness to fund Western initiatives, such as international development and health projects launched by the Group of Seven wealthiest countries.

But in recent years Japan has exhibited a desire to play a larger leadership role in its neighborhood. That emergence has only grown as China has demonstrated its intentions to dominate the region and to impose domestically and even to a certain extent regionally its vision of autocratic governance, a statist economy, and limited individual rights.

It was former Japanese Prime Minister Abe Shinzo who first promoted in 2007 the idea of what has become the Quad countries of the Indo-Pacific – the U.S., Japan, Australia, and India – as the emerging center of democratic governance and free and open economies fostering regional development, says Ms. Curtis, now director of the Indo-Pacific Security Program at the Center for a New American Security in Washington.

“The recent first-ever summit President Biden held with the Quad leaders signaled not just the growing importance of the Indo-Pacific to Washington,” she says, “but also how highly Washington values its partnership with Tokyo and the particular strengths Japan brings not just to the Quad but to the intensifying competition with China.”

Japan will play an important role in the working groups that the Quad summit announced on regional COVID-19 vaccine distribution and on climate change cooperation.

But Ms. Curtis says it’s in the third group on vital and emerging technologies that Japan’s assertive regional role is likely to be on fullest display.

“Japan has already emerged at the forefront of the effort to diversify supply chains and reduce an overdependence on China when it comes to resources and supplies … for technological development,” she says. “Clearly [it] intends to play a leading role in challenging the digital hegemony of China.”

Japan was one of the first countries to ban Chinese companies from participation in development of its 5G networks, Ms. Curtis notes, and it came to Australia’s assistance when China reacted to the Quad country’s criticism of human rights abuses in Xinjiang province by curtailing supplies of rare-earth metals.

And there’s little doubt Beijing has taken note of Japan’s new willingness not just to take actions to counter its giant neighbor, but to work with the U.S. in the broader regional competition as well. Last week the Chinese Foreign Ministry issued a readout from a phone conversation between the two countries’ foreign ministers that had China’s Wang Yi cautioning his Japanese counterpart to ensure that China-Japan relations “do not get involved in the so-called confrontation between major countries.”

Apparently referring to mounting pressure on Japan to drop the kid gloves it has traditionally donned to address China’s domestic issues, including human rights, Mr. Wang added, “China hopes that Japan, as an independent country, will look at China’s development in an objective and rational way instead of being misled by some countries holding biased view against China.”

But the pressure to fashion a more critical relationship with China is also building domestically, Japan analysts say, as a younger crop of leaders within the country’s ruling Liberal Democratic Party pushes measures to punish China over human rights abuses and to build closer political ties to Taiwan – a longtime no-no.

Yet as critical as Japan will be to the U.S. effort to compete with a rising China, Mr. Sokolski says Washington is going to have to figure out how to bring South Korea – another prosperous Asian democracy, yet one with historical tensions with Japan – into any regional effort to challenge the Chinese development model.

Moreover, he says any U.S.-led initiative to specifically challenge China’s Belt and Road initiative for infrastructure development should not aim to simply duplicate what China is already doing. He cites a recent NPEC report, “New Frontiers for Security Cooperation With Seoul and Tokyo,” that recommends focusing any regional infrastructure plan not on the big-ticket projects Beijing favors, but on building schools and hospitals, and what Mr. Sokolski calls “hearts and minds” and “people to people” projects.

“Together with our like-minded regional partners we can be quite effective in Southeast Asia, but not if the idea is to go toe-to-toe everywhere with China,” he says. “The aim of self-governed countries should be to give people choices.”

The White House has said Mr. Biden wants to build on the enthusiasm for regional cooperation on critical issues that the Quad summit generated when he hosts Mr. Suga. But White House officials note privately that the president will also encourage the Japanese leader to go public with the growing concerns the Japanese government shares with the U.S. on China’s threats against Taiwan, its aggressive stance in the South China Sea, its crackdown on Hong Kong, and human rights abuses targeting minority Uyghurs in Xinjiang province.

In the postwar, 20th-century world of an ideological battle pitting the U.S. against the Soviet Union, the focus of the White House was transatlantic relations. Thus decades of new presidents making the British prime minister their first foreign visitor.

But even European leaders say they understand why Mr. Biden would take the symbolic step of greeting Mr. Suga first.

“If the organizing principle of the first half of the 21st century is Sino-American rivalry for global leadership, then of course Japan is more important to the United States than Britain,” says Radoslaw Sikorski, a member of European Parliament and a former Polish foreign minister.

“It’s in the Far East that the issue of who is going to be top dog is going to be determined,” says Mr. Sikorski, who recently took part in a Monitor-organized discussion with Washington journalists. “It’s not in Britain or Europe right now.”

Biden bungles the politics of refugees

Police shooting of Daunte Wright: A timeline of the case