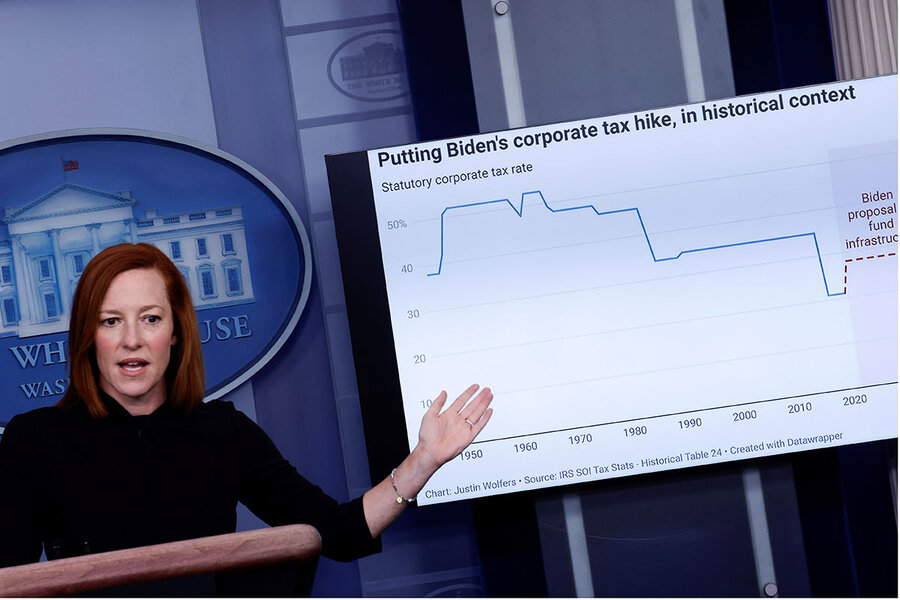 As President Joe Biden works to sell his massive infrastructure bill, he’s making a big bet that tax hikes, which would pay for much of the plan, are no longer a political liability for Democrats.

After decades in which Democrats often tried to avoid being labeled a “tax and spend” party, Mr. Biden’s own pollster is urging him to publicly embrace certain tax increases rather than justifying them as a necessary evil, citing surveys that show that a majority of Americans support raising taxes on corporations and wealthy people – and have for years.

Many Democrats believe the pandemic’s impact on economic inequality, including boosting the fortunes of big companies like Amazon at the expense of small businesses and individuals, has given Mr. Biden an opening to press the argument. He’s proposing to fund nearly all of his $2.25 trillion infrastructure and jobs plan – which goes far beyond repairing roads and bridges to include investments in “human infrastructure” – by raising taxes on corporations.

For decades, Democrats feared being labeled as the party of “tax and spend.” But now, as calls grow for those at the top to pay a “fair share,” many believe there is a political opening to act.

The White House estimates it could raise $2 trillion over 15 years by raising the corporate tax rate to 28% from 21%, and working with the IRS and global partners to disincentivize offshoring, tax havens, and loopholes that reduce the amount U.S. corporations pay to the federal government. Mr. Biden has also said individuals making more than $400,000 could see increases in their taxes. The top marginal tax rate, or the amount that rich people pay on each dollar earned over a certain threshold – roughly half a million dollars for individuals in 2020-21 – currently stands at 37% but exceeded 90% during World War II and the early years of the Cold War.

For decades, a majority of Americans have agreed that corporations and wealthy people do not pay their fair share in taxes. According to Gallup, 69% of those surveyed in 2019 believed that corporations pay too little – the same number as in 2004, with slight fluctuations in the years between. Likewise, the percentage who believed rich people pay too little dipped down to 55% in 2010, but rose to 62% in 2019, while public support for “heavy taxes on the rich” to “redistribute wealth” grew from 45% in 1998 to 52% in 2016. Less strongly worded polls about tax hikes on wealthy people have garnered even higher approval rates, including double-digit support from Republican voters. For example, a 2020 Reuters/Ipsos poll found 64% support for rich people contributing “an extra share of their total wealth each year to support public programs” – with 53% of Republicans saying they strongly or somewhat agreed with the idea, which is essentially a wealth tax.

“Public opinion has been pretty consistent for the past 20 years,” says Vanessa Williamson, senior fellow in governance studies at the Brookings Institution, who studies the politics of taxation. “What I think has changed is the willingness of Democratic leaders to put forward plans that are often really quite bold.”

Republicans are panning the Biden infrastructure plan as far too broad, and warning that raising corporate taxes will hurt average workers. They credit the GOP’s 2017 tax cuts, which brought corporate tax rates down from 35% to 21%, with revving America’s economy and bringing unemployment to its lowest level in decades. They also don’t buy the idea that Democrats can implement tax hikes without seeing a backlash at the polls.

“I think workers understand that corporate tax increases affect them,” says Sen. Kevin Cramer of North Dakota, the most senior Republican on the Senate’s Transportation and Infrastructure subcommittee.

But Democrats believe the political tides are shifting. During Sen. Bernie Sanders’ two presidential campaigns, which particularly resonated with younger voters, he spotlighted the issue of income inequality and changed the political conversation in Washington around wealth distribution.

“When you have the middle class paying an effective tax rate higher than billionaires, we need to create a tax system which is progressive, which is fair, and demand that the wealthy start paying their fair share of taxes,” he tells the Monitor.

A bipartisan group of 20 senators are talking by phone today to work out a possible counterproposal that would focus more narrowly on traditional infrastructure, but it remains to be seen whether the necessary 60 votes could be found on both what should be included – and how to pay for it.

Mr. Biden’s proposed hikes would give the U.S. one of the highest combined corporate tax rates in the Organization for Economic Cooperation and Development (OECD), a bloc of countries ranging from Australia to Turkey accounting for about 80% of global trade and investment.

Indeed, even with the 2017 tax cuts, the U.S. tax rate on corporations currently ranks in the top third of OECD countries when taking into consideration both federal and state taxes. Unless accompanied by a drop in state taxes on corporations, Mr. Biden’s proposal would increase the combined rate from about 26% to 32.34%, just above France’s rate of 32.02%, the most expensive in the OECD last year. Such a tax hike would also run counter to global trends. Average corporate tax rates around the world have dropped by nearly half over the past 40 years, down from 40% to 24%.

But the U.S. faces increased bills relative to its revenue. And record deficits – including an estimated $1.9 trillion from the 2017 tax cuts and nearly $7 trillion from COVID-19 relief packages – are adding to a ballooning debt. As the wealthiest 20% of citizens in America have seen a far faster rise in their fortunes than the bottom 80%, a trend exacerbated by the COVID-19 shutdowns that disproportionately hurt lower-income service workers who couldn’t work remotely, the Democratic mantra that rich people must “pay their fair share” has been gaining steam.

Even before the pandemic, a paper by the Institute for Policy Studies found that 400 Americans own more wealth than all Black households and a quarter of Latino households combined.

“It costs money to keep this country running. It costs money to have infrastructure, it costs money to build opportunities, and the wealthiest Americans and biggest corporations are not paying a fair share,” says Sen. Elizabeth Warren of Massachusetts, whose detailed proposals for a wealth tax and other measures have added intellectual heft to progressives’ push for redistribution of wealth. In proposing an ultra-millionaire tax, she cited a study by economists at the University of California, Berkeley, which projected that 99% of Americans would pay about 7.2% of their total wealth in taxes in 2018 while the top 0.1%, by contrast, would pay about 3.2%.

In a brief interview, Senator Warren chalks that up to loopholes created by lobbyists in Washington and exploited by expensive lawyers that middle-class families can’t afford. “And the consequence, year after year after year, has been to push more of the burden of running this country onto working families while the wealthy suck out more and more of the benefits,” she says.

Roger L. Martin, a professor emeritus and former longtime dean at the Rotman School of Management at the University of Toronto, has outlined five eras of thinking on wealth and taxation in the 20th and 21st centuries. He believes the current era will come to most closely reflect the thinking that was prevalent between the Depression and World War II, in contrast to the Reagan-era theory of trickle-down economics.

“We did an experiment, starting in 1981, and the experiment had an unintended consequence – and that unintended consequence was much greater enrichment of the wealthy than I think anybody had envisioned,” says Mr. Martin. Still, the biggest problem today is not that rich people have gotten richer, he says, but that their increasing share of economic growth has caused median income to stagnate, in what he describes as a zero-sum game.

He argues that the Trump corporate tax cuts were excellent, but should have been accompanied with increases in personal taxation, similar to the Swedish model. In Sweden, he says, the government incentivizes corporations to provide good-paying jobs, while citizens pay a premium for the privilege of living in a good society with such job opportunities. The country’s combined corporate tax rate is 21%, while the top marginal tax rate is 57%.

But some Republicans are joining the “pay their fair share” chorus when it comes to how much giants like Amazon pay in corporate taxes. The global commerce company was among 91 corporations, including 60 profitable Fortune 500 companies, that paid no federal taxes in 2018.

“I don’t support the call to raise the corporate rate to pay for this latest infrastructure boondoggle, which has really nothing to do with infrastructure,” says Republican Sen. Josh Hawley. But, he adds, his voters back home in Missouri do want to see an end to big corporations getting government tax breaks. Smaller businesses and small manufacturers are the ones who usually get hit, he says, because they don’t have the ability to shuffle around their assets from haven to haven, jurisdiction to jurisdiction.

“So they’re paying full freight, whereas these big multinationals are skipping a lot of tax burden,” says Senator Hawley, who is one of a number of Republicans attempting to further expand the populist wing of the GOP in the wake of Donald Trump’s presidency, and is seen as a possible presidential contender in 2024.

Nearly all Americans see taxpaying as a civic duty. A 2019 IRS report found that 95% of taxpayers agreed that “it is every American’s civic duty to pay their fair share of taxes.” That level of consensus is extremely rare in public polling, says Dr. Williamson of Brookings and author of “Read My Lips: Why Americans Are Proud to Pay Taxes.” Those who don’t agree are roughly equivalent to the percentage of people who believe Elvis is still alive or think the U.S. faked putting a man on the moon.

The battleground, of course, is in the definition of what is “fair.”