Alex Luck, an expert on the Chinese military, tweeted photos and videos that were first posted on Chinese social media platform Weibo.

He tweeted: “Nice shots of Liaoning carrier group shadowed by US DDG. An 054A FFG and an 052D DDG visible behind the carrier.

“And the footage. Note J-15 approach and arrested landing.”

According to the follow-up tweets, the photos and videos were “a post on a USN sailor’s Twitter few days ago, apparently, he is on the US warship which is tracking Liaoning”. 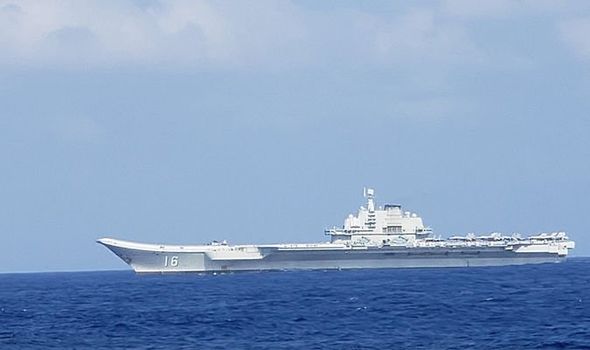 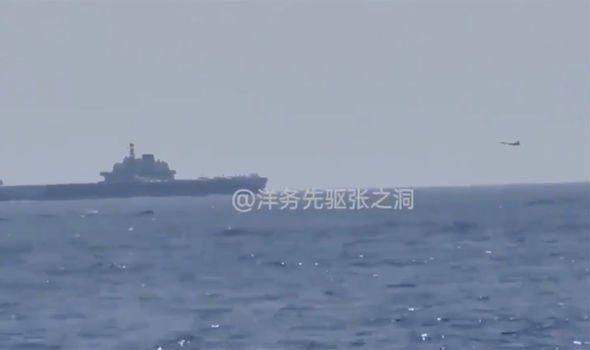 On Monday it was confirmed that the Chinese carrier, Liaoning, led a naval exercise near Taiwan.

This coincides with a similar photo released by the US Navy last Sunday showing USS Mustin “shadowing” a Liaoning carrier group.

The US released a photo that showed the USS Mustin, a guided-missile destroyer, shadowing the Liaoning in a move that analysts claim was designed to send a clear message to the Chinese.

The photo showed the ship’s captain, Commander Robert J Briggs, and his deputy Commander Richard D Slye watching the Liaoning, which was just a few thousand metres away. 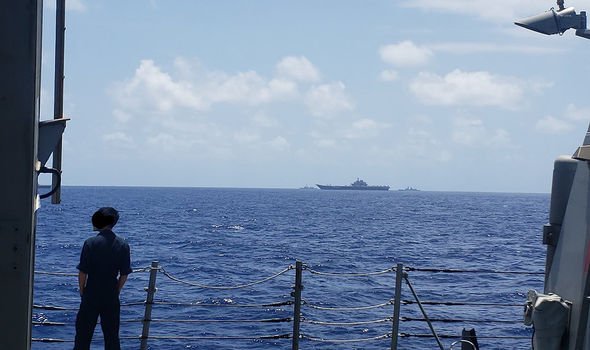 One analyst, Lu Li-shih, a former instructor at Taiwan’s Naval Academy, said the photo was a type of “cognitive warfare” from the US as tensions in the East and South China Soar grow.

He said: “In the photo, Commander Briggs looks very relaxed with his feet up watching the Liaoning ship just a few thousand yards away, while his deputy is also sitting beside him, showing they take their PLA counterparts lightly.

“This staged photograph is definitely ‘cognitive warfare’ to show the US doesn’t regard the PLA as an immediate threat.”

Andrei Chang, the editor-in-chief of the Canada-based Kanwa Defence Review, said the photo was a “warning to the PLA” that the US was thoroughly informed about the Liaoning strike group.

The Beijing-based South China Sea Strategic Situation Probing Initiative confirmed that the USS Mustin has been following the Liaoning group through the East and South China Seas.

The Japanese defence ministry is also reported to have sent its own destroyer warship and two patrol aircraft to monitor the strike group as well.

This comes as the US and the Philippines slammed China for filling the South China Sea with more than 200 boats lashed together in rows as an act of intimidation.

Beijing insisted that the 200 vessels were “normal and legitimate” and merely fishing boats sheltering from bad weather.