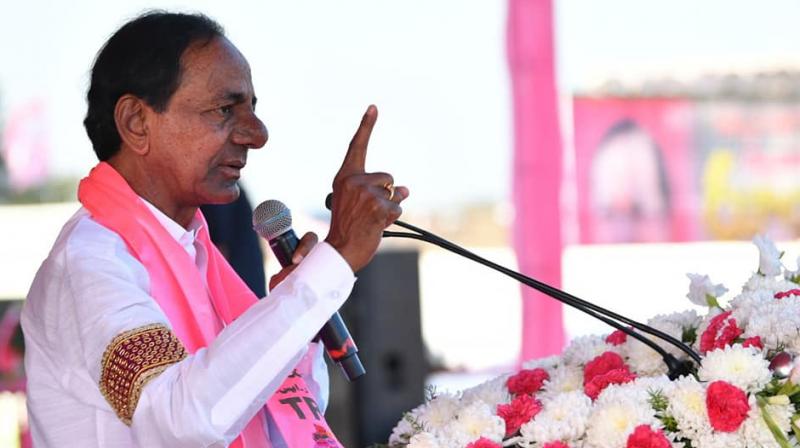 Hyderabad: All eyes are on Chief Minister K. Chandrashekar Rao’s high-stakes public meeting in Halia on Wednesday. The TRS has pinned all its hopes on the CM’s rally to boost the ruling party’s chances of a win in the Nagarjunasagar assembly bypoll scheduled for April 17.

Rao will give the final, decisive push for the TRS poll campaign by addressing an estimated turnout of one lakh people, mostly of beneficiaries of the state government’s welfare schemes.

This is the second public meeting to be addressed by the Chief Minister in the poll-bound constituency. On February 10, Rao kick-started the campaign by addressing a public meeting in Halia, in which he showered sops worth several thousands of crores, and promised implementation of lift irrigation projects, laying of roads and provision for other facilities to the people in the region.

Arrangements for the grand finale of the TRS campaign were made over a plot of 50 acres with adequate space to ensure the Covid norms on social distancing are adhered to by the participants. The public meeting will be held over a space of 20 acres and the remaining 30 acres will be left for the parking of vehicles.
Circles were drawn on the ground to ensure a mandatory six-feet distance between participants.

EC officials have warned people and the organisers that cases will be booked and penalties imposed if they flouted Covid norms on the mandatory wearing of masks, sanitation and social distancing. Special observers were deployed to examine whether the Covid regulations were followed or not at the meeting.

Ministers G. Jagadish Reddy, Talasani Srinivas Yadav, Mohd Mahmood Ali, V. Srinivas Goud and dozens of TRS MLAs, MLCs, MPs and other local leaders have camped in Nagarjunasagar for the past two weeks to make the arrangements fool-proof for the public meeting.

Plans were made to moblise the beneficiaries of the TRS government schemes such as Rythu Bandhu, Rythu Bima, Aasara pensions, fee reimbursement, free 24×7 power to agriculture, government gurukul schools, scholarships, KCR kits, Shaadi Mubarak, Kalyana Laxmi, free sheep distribution etc. The beneficiaries from every village in each mandal are being mobilised for the  meeting.

Biden bungles the politics of refugees