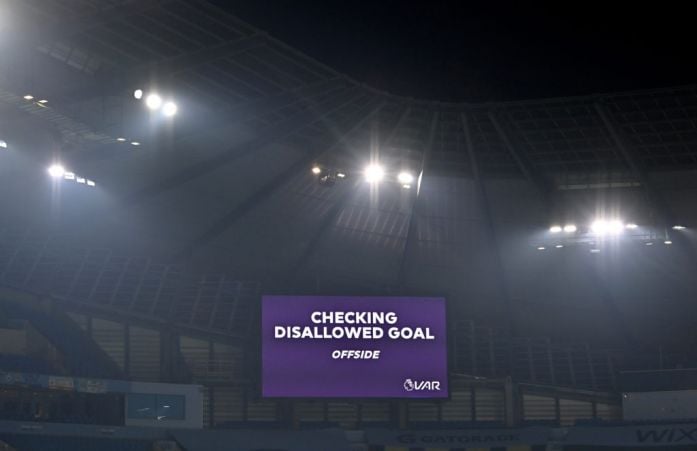 The advent of VAR has brought greater scrutiny on to the offside law, with many players and pundits frustrated and confused by some of the borderline calls that have been made where sometimes only a player’s upper arm is ahead of the final defender. © PA Wire/PA Images

Time limits on marginal offside calls should be considered to help with the flow of the game, according to the man who chaired the most recent meeting of football’s law-making body.

The advent of VAR has brought greater scrutiny on to the offside law, with many players and pundits frustrated and confused by some of the borderline calls that have been made where sometimes only a player’s upper arm is ahead of the final defender.

The time taken to make those calls has also been criticised.

“With VAR now we’re coming down to bootlaces almost, and there has to be a degree of common sense,” O’Connor, a former referee, told the PA news agency.

“It’s not an easy area but it’s one we need to keep looking at and keep tweaking and eventually we’ll get there. Should you put a time limit on it? Possibly. It wasn’t discussed at the IFAB meeting but it’s been discussed in football more widely. If some part of the body is in front but the rest is behind (the defender), should it be allowed?”

O’Connor could become British football’s most senior administrator if he is elected as Britain’s FIFA vice-president by UEFA member associations at its Congress next Tuesday.

O’Connor defended the work of the IFAB, which is often accused of being detached from the wider football world.

“IFAB are in touch (with football),” he said.

“The laws are always going to need reviewing but I think it’s the right body and I think it’s done reasonably well over the last couple of years.

“VAR works, it’s sometimes a little slow but I think that will come in time.

“FIFA are looking at what I call the ‘Tesco Value’ version (of VAR) which will come even further down the chain and make it financially available to more leagues.

“That can only help referees. They are only human and they give what they see, and the pace of the game is so quick.”

Mercedes ahead of Red Bull at Imola, but are they favourites? The Friday F1 verdict from both teams