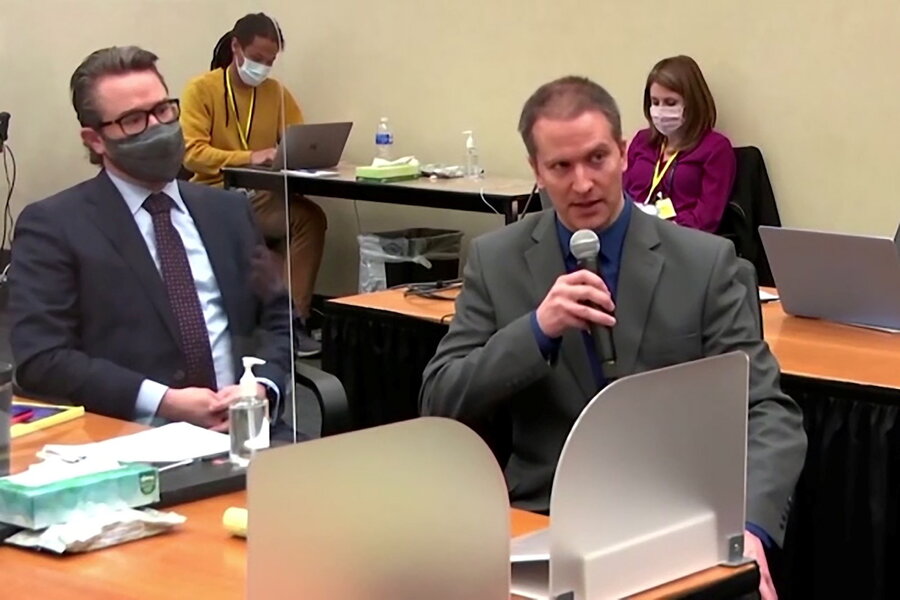 Former Minneapolis police officer Derek Chauvin’s murder trial in George Floyd’s death will be in a jury’s hands by early next week, after his brief defense wrapped up with Mr. Chauvin passing on a chance to take the stand and tell the public for the first time what he was thinking when he pressed his knee against Mr. Floyd’s neck.

Closing arguments are set to begin Monday, after which a racially diverse jury will begin deliberating at a barbed-wire-ringed courthouse in a city on edge – not just because of the Chauvin case but because of the deadly police shooting of a 20-year-old Black man in a nearby suburb last weekend.

Before the jury was brought in Thursday, Mr. Chauvin, his COVID-19 mask removed in a rare courtroom moment, ended weeks of speculation by informing the judge he would invoke his Fifth Amendment right to not testify.

Shortly afterward, the defense rested its case, after a total of two days of testimony, compared with two weeks for the prosecution.

Judge Peter Cahill reminded the jurors they will be sequestered starting Monday and said: “If I were you, I would plan for long and hope for short.”

Mr. Chauvin is charged with murder and manslaughter in Mr. Floyd’s death after the Black man was arrested on suspicion of passing a counterfeit $20 at a neighborhood market last May.

Bystander video of Mr. Floyd gasping that he couldn’t breathe as bystanders yelled at Mr. Chauvin to get off him triggered worldwide protests, violence, and a furious examination of racism and policing in the United States.

The most serious charge against the now-fired white officer, second-degree murder, carries up to 40 years in prison, though state guidelines call for about 12.

Prosecutors say Mr. Floyd died because the officer’s knee was pressed against Mr. Floyd’s neck or close to it for 9 1/2 minutes as he lay on the pavement on his stomach, his hands cuffed behind him and his face jammed against the ground.

Law enforcement veterans inside and outside the Minneapolis department testified for the prosecution that Mr. Chauvin used excessive force and went against his training, while medical experts said Mr. Floyd died of asphyxia, or lack of oxygen, because his breathing was constricted by the way he was held down.

But Chauvin attorney Eric Nelson called a police use-of-force expert and a forensic pathologist to help make the case that Mr. Chauvin acted reasonably against a struggling suspect and that Mr. Floyd died because of his illegal drug use as well as underlying heart conditions and other medical issues. Fentanyl and methamphetamine were found in his system.

The only time Mr. Chauvin has been heard defending himself was when the jury listened to body-camera footage from the scene. After an ambulance had taken Mr. Floyd away, Mr. Chauvin told a bystander: “We gotta control this guy ’cause he’s a sizable guy … and it looks like he’s probably on something.”

The decision of whether Mr. Chauvin should testify carried risks either way.

Taking the stand could have opened him up to devastating cross-examination, with prosecutors replaying the video of the arrest and forcing Mr. Chauvin to explain, one frame at a time, why he kept pressing down on Mr. Floyd.

But testifying could have also given the jury the opportunity to look at his unmasked face and see or hear any remorse or sympathy he might feel.

Also, what was going through Mr. Chauvin’s mind could be crucial: Legal experts say that an officer who believes his or her life was at risk can be found to have acted legally even if, in hindsight, it turns out there was no such danger.

In one final bit of testimony on Thursday, the prosecution briefly recalled a lung and critical care expert to knock down a defense witness’ theory that carbon monoxide poisoning from a squad car’s exhaust might have contributed to Mr. Floyd’s death. Dr. Martin Tobin noted hospital tests that showed Mr. Floyd’s level was within the normal range.

With the trial in session, Minneapolis has been bracing for a possible repeat of the protests and violence that broke out last spring over Mr. Floyd’s death.

The case has unfolded amid days of protests in the adjoining suburb of Brooklyn Center, after Officer Kim Potter, who is white, allegedly mistook her gun for a Taser and fatally shot Daunte Wright. She resigned and has been charged with manslaughter.