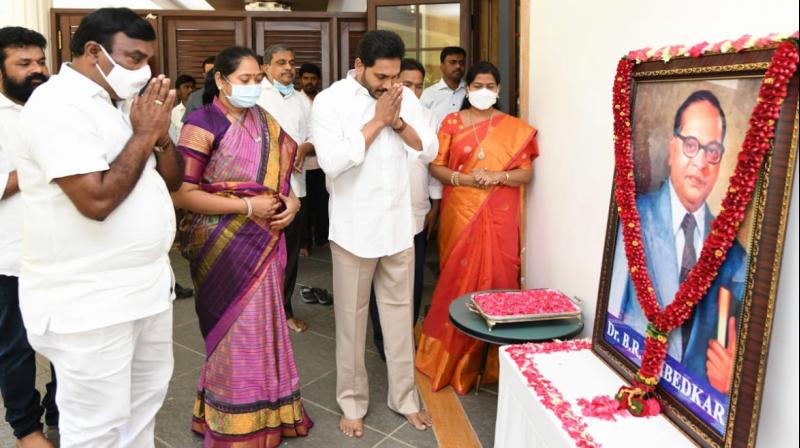 VIJAYAWADA: Dr B.R. Ambedkar’s vision is being fulfilled for the first time in Andhra Pradesh after YSRC government led by Chief Minister Y. S. Jagan Mohan Reddy came to power in the state.

The assertion was made by AP government advisor Sajjala Ramakrishna Reddy after he and other ruling party leaders paid floral tributes to Dr. Ambedkar on the latter’s 130th birth anniversary celebrated at the party’s central office here on Wednesday. On the day, Ramakrishna Reddy released a book by Varaprasad based on events that took place in the life of Dr. Ambedkar.

Speaking on the occasion, Ramakrishna Reddy said Dr. Ambedkar was a great leader whose ideology gave a direction to both India and the world. The Father of Indian Constitution had tirelessly advocated equality in the society. For the first time in history of AP, Ambedkar’s vision is being fulfilled in the state since past 20 months under the leadership of Jagan Mohan Reddy, the government advisor maintained.

He emphasised that the Chief Minister has been working on empowerment of women, adequate political representation for Dalits and development of poor irrespective of caste and religion.

MP Nandigam Suresh said Jagan Mohan Reddy has always declared that people of Scheduled Castes are his relatives and he is working hard for their welfare and development. Giving his own example, Suresh pointed out that despite being an ordinary activist of the party, he has been made an MP. This is proof that the CM always supports Dalits, he stated.

MLA Merugu Nagarjuna said the Chief Minister has been implementing Ambedkar ideas in the state through various schemes and programmes to develop all sections of the society.

APSDCL chairman Challa Madhusudan Reddy and other leaders participated in the event. They spoke in detail about the development activities taken up by YSRC government for uplift of oppressed communities.

Spotlight returns to police reform with little movement from White House: The Note

US, Iran recommit to indirect talks after sabotage attack on nuclear site