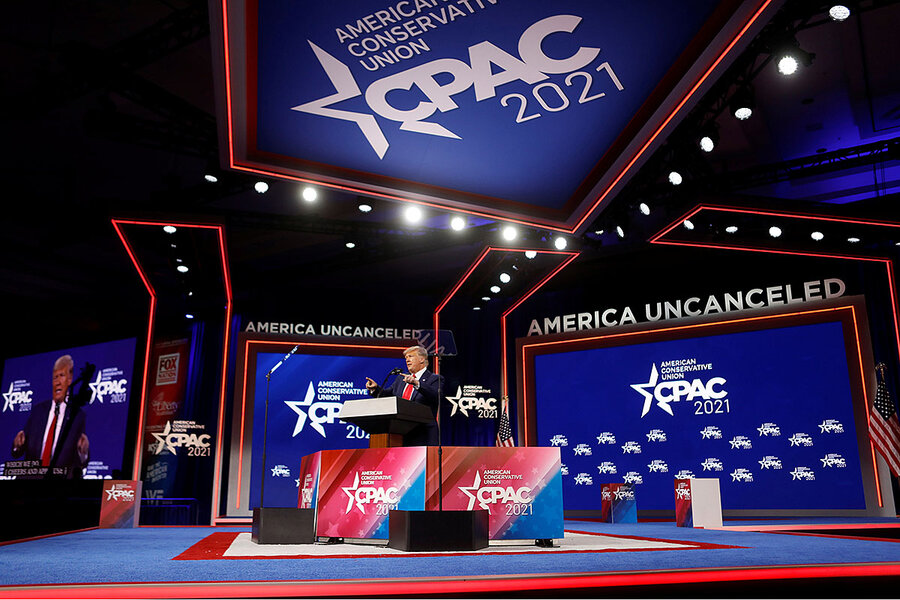 Has Donald Trump’s time come and gone? After failing to win reelection in 2020 and getting booted from Twitter after the Jan. 6 Capitol insurrection, he seems a shadow of his former self. Even his “Trump”-emblazoned Boeing 757 sits idle and reportedly in disrepair at an airport in upstate New York.

In lieu of tweets, former President Trump or his team now issues near-nightly emails with political endorsements, attacks, and pronouncements, peppered with his signature exclamation points and capitalizations. They are Twitter-ready, and often, in fact, tweeted and retweeted by reporters and advisers.

Yet somehow, old-fashioned emails lack the punch of those 280-character missives that used to land on millions of phones multiple times a day. On TV, the medium that made him a star with “The Apprentice,” his presence has returned to the modest levels of May 2015, right before he launched his 2016 presidential campaign, according to the Stanford Cable TV News Analyzer.

The former president’s popularity with the base makes him the odds-on favorite to be the GOP nominee, should he choose to run again. For now, the focus is on 2022 and playing kingmaker.

To state the obvious, Mr. Trump is no longer president, and therefore has to be more strategic in making news. Merely appearing on Fox or Newsmax doesn’t guarantee buzz.

But make no mistake. Mr. Trump remains de facto leader of the Republican Party, and – unprecedented in modern times for a one-term president – may run for the White House again. He has raised tens of millions of dollars for his leadership political action committee and is helping other Republicans fill their coffers.

At last weekend’s Republican National Committee donor summit in Palm Beach, Florida, Mr. Trump did make headlines – by stirring controversy, to the chagrin of some attendees. In a speech to donors at his Mar-a-Lago estate, he veered off script, attacking Senate Minority Leader Mitch McConnell and expressing “disappointment” in former Vice President Mike Pence for proceeding with the counting of electoral votes in Congress on Jan. 6.

Mr. Trump may seem to be shooting himself in the foot by fanning discord within his own party. To be sure, some mainstream Republican leaders (and ex-leaders) aren’t happy with him. See former House Speaker John Boehner’s new book, “On the House,” which blames Mr. Trump, among others, for GOP dysfunction.

But there’s a larger dynamic at play: Mr. Trump still owns the Republican grassroots, and the grassroots own the party. Three months after the siege of the Capitol, in which five people died including a police officer, half of Republicans believe it was largely a nonviolent protest or fomented by left-wing activists, a Reuters/Ipsos poll finds. And 6 in 10 Republicans endorse Mr. Trump’s false claim that the 2020 election was stolen.

If Mr. Trump does run for president again, he will be the odds-on favorite for the GOP nomination, given his fundraising skill and showmanship. But it’s far from certain that he’ll run again. He may find that, at this stage in his life, he’d rather play kingmaker than take on the heavy lift of another campaign – not to mention another term in the White House. There’s also the not-insignificant fact of his legal troubles in New York over his tax returns.

Thus, all the attention to Mr. Trump’s political endorsements – and to the comings and goings at Mar-a-Lago. When he reportedly turned down a request for a sit-down with Nikki Haley, his former United Nations ambassador, it was widely seen as punishment for her blasting him over the Capitol insurrection. This week, in an apparent effort to make amends, Ms. Haley said she wouldn’t run for president in 2024 if Mr. Trump gets in.

For now, though, the name of the game is 2022. Historically, the party out of power in the White House usually gains seats in Congress, and given the tight margins, the GOP has an excellent shot at retaking one if not both houses. Redistricting alone could hand the Republicans the net gain of five seats they need to retake the House.

In the 50-50 Senate, the GOP faces a tougher playing field, but there are some wild cards. One possibility is that New Hampshire’s popular Republican governor, Chris Sununu, runs against incumbent Democratic Sen. Maggie Hassan. If he does, that’s a likely toss-up and potential GOP pickup. In that case, it would be key for Mr. Trump to lie low. New Hampshire is a blue state in presidential politics.

But nationally, a strong GOP midterm performance, with Mr. Trump playing a smart strategic game in fundraising and endorsements, could be all he needs to get revved up for another shot at the Oval Office.

“If Republicans have a great year in 2022, he can insert himself as the head of things,” says Dante Scala, a political scientist at the University of New Hampshire.

And maybe Mr. Trump can figure out a way to take Trump Force One out of mothballs.

What we know about the fatal police shooting of Daunte Wright

Closing the gender pay gap: Are lawsuits the way forward?