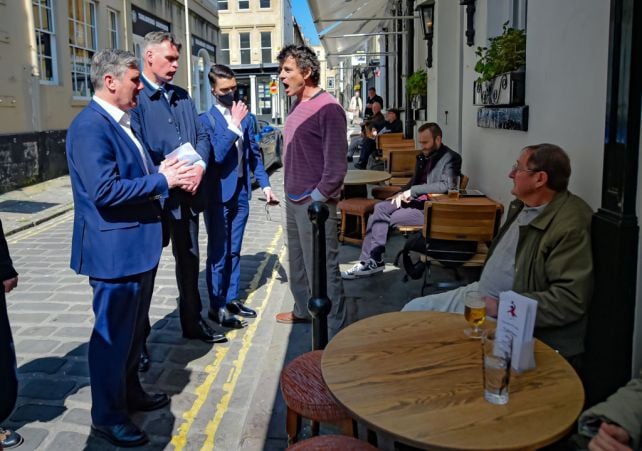 The UK’s leader of the opposition, Keir Starmer, was forced to leave a pub during a walkabout after being kicked out by the landlord following a row over lockdown restrictions.

Rod Humphris, landlord of The Raven pub in Bath, southern England, appeared to be held back by members of Mr Starmer’s security team as he shouted “That man is not allowed in my pub” and “Get out of my pub” at the UK Labour leader.

The incident on Monday was captured on camera by reporters amid a visit to the city by Mr Starmer to support a regional mayoral candidate Dan Norris ahead of forthcoming elections.

On why he asked Mr Starmer to leave, Mr Humphris later said: “I had heard that the Labour Party were coming round and he turned up and I told him what I thought of him, basically.

“I think he has utterly failed us as the Leader of the Opposition. He has completely failed to ask the questions that needed asking, like, why did we throw away our previous pandemic preparedness?

The 54-year-old, who said he does not agree with coronavirus lockdowns, said: “He walked into my pub without asking and I threw him out. Or at least, I did my best to throw him out – his security got in the way.”

It is understood that the Labour leader and his team had pre-arranged the visit to The Raven with a member of the pub’s staff.

Footage captured by reporters shows Mr Starmer and Mr Humphris talking outside of the pub prior to the confrontation, where the Labour leader appears to mention frontline healthcare workers.

“So I really don’t need lectures from you about this pandemic,” Mr Starmer could be heard saying.

The Labour leader, who was wearing a black face mask while inside, left the pub following the confrontation, accompanied by members of his team.

Mr Humphris said he gave Mr Starmer a “piece of my mind”, adding: “I would say this to any politician – it’s not a partisan matter.”

A clip circulating online shows Keir Starmer being confronted by someone spreading dangerous misinformation about the Covid-19 pandemic. We will not be amplifying it. 1/2

The Labour Party press office said on Twitter that it would “not be amplifying” the footage of the Labour leader being confronted.

The tweets said: “A clip circulating online shows Keir Starmer being confronted by someone spreading dangerous misinformation about the Covid-19 pandemic. We will not be amplifying it.

“Keir argued that our NHS staff have been working tirelessly to protect public health and that restrictions – while painful – have been absolutely necessary to save lives.”

Macron called for EU Army to ‘defend against’ Russia as ‘150,000 troops’ mass at border