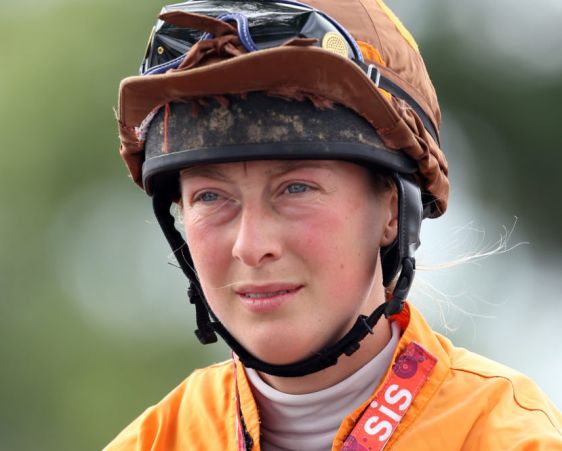 Jockey Lorna Brooke died in hospital on Sunday following a fall at Taunton earlier this month, the Injured Jockeys Fund has announced.

Brooke was riding Orchestrated for her mother, Susan Brooke, when falling at the third fence in the Pontispool Equine Sports Centre Handicap Chase on April 8th.

Racing was delayed by more than hour as she was treated on track, before being transferred into an air ambulance.

A statement issued by the IJF on Friday said Brooke was in a “critical, but stable condition” in intensive care at Southmead Hospital in Bristol, and had been placed in an induced coma due to “various complications” during the week.

However, a further statement released on Monday confirmed she had died.

The statement read: “It is with deep sadness that we have to share the tragic news that Lorna Brooke passed away yesterday.

“Her family thank everyone for their kindness in the last few weeks, particularly the staff at Southmead Hospital who were so professional.

“They will be having a private funeral and will hold a celebration of Lorna’s life once Covid restrictions allow.”

AP McCoy was among the leading racing figures to pay tribute, writing on Twitter: “Heartbreakingly sad news. Thoughts and prayers with her family. RIP Lorna.”

Brooke (37), who rode as a 7lb-claiming amateur, enjoyed a high-profile success when winning the inaugural Ladies Handicap Chase at Fairyhouse on Moonlone Lane for Paul Stafford in 2015.

A 25-1 chance, Moonlone Lane had gone winless in a 26-race career up to that point, but Brooke guided him home in front, with Katie Walsh, Lizzie Kelly, Rachael Blackmore and Nina Carberry all trailing in her wake. Moonlone Lane then won next time out at Musselburgh under Brooke.

“When she got the fall people were very concerned, we were too and we were saying prayers, but unfortunately this has happened.

“She was a lovely person, obviously she rode that winner for us and we kept in contact over the years through social media, congratulating each other on social media when each of us had winners. It’s shocking it’s happened.”

Thinking back to the day at Fairyhouse, Stafford said: “He’d never won a race until she rode him that day, she took the bull by the horns, went on and it paid off – she gave him a fantastic ride.

“I’d never met Lorna before that, she was more or less allocated the ride, but I knew she was a capable rider. It worked out and she rode him several times again, winning at Musselburgh.

“She was over the moon that day at Fairyhouse, and her family. I met her mother at Bangor one day and she’s lovely too.

“I send my condolences to her family, my heart goes out to them.”

Brooke partnered 17 winners in Ireland and Britain since the 2001/02 season, riding largely for her mother, but also teaming up with Shropshire-based John Groucott on a regular basis.

One of Brooke’s victories came aboard the Evan Williams-trained Dashing Doc in a lady amateurs’ handicap hurdle at Newton Abbot in 2011 – a race in which Cheltenham Festival and Grand National heroine Blackmore finished third.

Williams said: “The best way I can describe Lorna is an enthusiast. Whether it was a point-to-point in Herefordshire or riding under rules with the girls in the changing room, she was always smiling and always working.

“She was a bubbly personality and typical of so many people involved in the industry – unsung heroes who are part of the weighing room and one of us, if that makes sense. It’s what makes racing so very special.

“You’d see her and her mum Sue in Ffos Las or Taunton, they’d be doing all the work themselves. You’d often have to give her a leg-up or give her a hand to lead one up – that was their enjoyment and that was their life.

“For her to pay the ultimate price is so terribly devastating, but it was her passion.”

Reflecting on Brooke’s success board Dashing Doc 10 years ago, Williams added: “It’s strange really because the man who owned Dashing Doc was a farmer who lived next door to me called Ralph Thomas and we lost him this week.

“He was a smashing fellow and I can remember him in the paddock actually, chatting with Lorna about how they were going to bring about the downfall of this girl they’d heard about from Ireland – Rachael Blackmore!

“It’s very sobering to think that Lorna beat Rachael, who went on to such great things.

“I suppose it’s a great epitaph for what she’s done in the sport.”

“Our thoughts and condolences are with Lorna’s family and friends during this time.

“The RCA is in contact with Taunton Racecourse and relevant authorities, offering our support as required.

“All racecourses racing today will observe a period of silence and display black armbands as a mark of respect to Lorna’s memory.”

The British Horseracing Authority released a statement in which its chief executive Julie Harrington said: “Everybody at the BHA is devastated by this news. Lorna was a much-loved member of our sport, in which she and her family are steeped.

“Lorna demonstrated many of the qualities that make British racing so special. She was a proud competitor and somebody who was driven by an abundance of love not only for the sport but for the horses she competed with.

“My thoughts, along with everybody else who loves racing, are with Lorna’s family, friends and colleagues at this dreadful time.”

How Super League dozen have fared in European competition

What next for Jose Mourinho after Tottenham sacking?