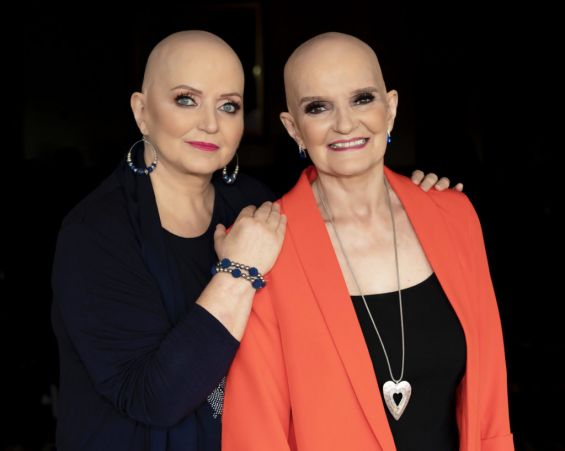 There has been so much cancer in the lives of the Nolan sisters that they could be forgiven for thinking ‘Why me?’

The death of their sister Bernadette (Bernie) in 2013, aged 52, from breast cancer which had spread to her brain, lungs, liver and bones, was a huge wrench to the family.

Linda, 62, is now living with incurable cancer and is having palliative care.

Anne was told at around the same time last year that the breast cancer she suffered in 2000 had returned. After treatment, it is now in remission and at present she is cancer-free.

Just finished reading Anne and Linda Nolan’s new book Stronger Together that came this morning couldn’t put it down wow what a book emotional, inspiring and heart felt thank you ladies for being so honest and giving hope and strength to many woman and cancer patients thank you xx

Anne, 70, never feels as if her family has been unlucky, she says.

“There are millions of people who’ve gone through worse than what we’ve gone through, families with fewer siblings than we have. There are eight kids in our family and three of us have had cancer.”

Linda adds: “I never think, ‘Why me?’ It was Bernie who said, ‘Why not me?’ But I do feel we’ve had bad luck that the three of us have got it. We don’t have the BRCA 1 or 2 gene, we’ve been tested for that. It could be a rogue gene from our dad’s side.”

Meeting them today on Zoom, neither shows a modicum of self-pity. Their hair is growing back and they relay how last year they were both able to have chemotherapy together during the pandemic, which provided much comfort at a difficult time.

Despite their experiences with cancer, humour is never far from their lips as Anne berates herself for not putting on as much ‘slap’ for the interview as her bleached-blonde younger sister.

“You have heard of the dance DJ group The Chemical Brothers; well, I named me and Anne the Chemo Sisters!” Linda recalls.

Linda, the more extroverted of the two, made life much easier when they were having treatment together, chatting to the nurses and getting all their phone numbers, Anne recalls.

“It did help that we were both there together, especially because of Covid. It can be a lonely road,” Linda reflects. “When Anne was diagnosed, we would have all been round her house immediately, we’d have had a laugh, we’d have had a cry, but all we could do was stand at her garden wall and wave. Having treatment together made it easier for us.”

Anne recalls: “I was scared of stepping outside the door for fresh air because the oncologist had said to us, ‘If you get the virus it could be fatal, you could die’. It was scary not to have your loved ones around you.”

When word got out that the sisters were having treatment together, a little pigeonhole was set up in the hospital for all the fan mail that arrived, Linda recalls.

They have now written Stronger Together, an account of their journey with cancer with no holds barred descriptions of their treatments, the side effects, how they coped with losing their hair, the neuropathy (nerve damage) that still gives them pain and how they have emerged on the other side.

OMG! Stronger Together is at No.1 on Amazon, so excited for you all to finally be able to read it tomorrow!

If you haven’t already, pre-order your copy for free next day delivery: https://t.co/PIvqKe9K0U pic.twitter.com/Q64ptljiEH

The book is interspersed with recollections of how cancer has affected those close to them, including their late sister Bernie and also Linda’s late husband, Brian, who had skin cancer.

They decided to write the book partly to help people with cancer know that they are not alone, says Anne.

“It might help people who have cancer, or even those who haven’t had cancer, know what it’s like,” she explains.

Despite a global pandemic & #cancer this #lady smiles whilst working to raise awareness of this life threatening disease. What a remarkable #women. I raise my glass to the amazing ⁦@LindaNolan_⁩ You really are inspirational! pic.twitter.com/Z51VCu7S5p

Linda’s breast cancer (which was diagnosed in 2006) returned in 2017 as secondary in her hip. Then last year she was told it had spread to her liver and that it’s incurable but can be managed. She could potentially live another 15 years, they have been told.

The siblings have clearly rallied round. Linda lived with her sister Denise and her partner Tom last year, but is now back in her own house, while another sister, Maureen, moved in to look after Anne when she was having chemotherapy – and has never left.

Apart from Coleen, who lives in Cheshire, the sisters and brothers live nearby so there is always support on hand.

“It can be lonely,” Linda says of lockdown. “But I’ve been lucky enough to be in a bubble with family. I’m lucky to wake up every morning and my treatment is going well, I’m taking chemo tablets at home.”

In fact, she takes a cocktail of 28 tablets a day. One side effect is that she has difficulty sleeping and on occasions has difficulty speaking. She also suffers neuropathy pain in her feet and has to go for a scan every three months.

“I try not to worry about the results or think about cancer, because then cancer is winning,” she reflects. “I try to put it to the back of my mind.”

@LindaNolan_ you both looked incredible this morning on tv.. you’re going to help so many other people going through similar things.. sending you lots of love .. hope to see you soon. ❤️❤️❤️

Anne, who was originally diagnosed with cancer in 2000, is on anti-cancer drugs and has regular MRI scans. She admits she does worry about the cancer returning.

“I worry all the time. If I bang my knee and then two days later I feel a lump where I banged it, I immediately think it’s cancer, and I have counselling about that.”

Yet there is a stoicism about both women. They are open and honest about the debilitating side effects of their treatments.

There’s also a chapter devoted to their beloved sister Bernie, which they admit brought back painful memories.

“When I eventually had my head shaved, I looked in the mirror and I saw Bernie, because we look alike. We think about her every day. Every day we miss her,” says Linda.

The sisters’ shared cancer experience has brought them closer together, they reflect. “We love each other anyway but there is our little bond that we have been through this together and supported each other,” says Linda.

And they both live their lives differently, they agree.

“Cancer has given me a sense of freedom. It’s so priceless to have time with the sisters and the kids. I might not be here for the next party or the next Christmas,” Linda reflects.

Anne agrees. “When you have a life-threatening disease, I look at things now and don’t care about material things. I always wanted the lovely detached house but it doesn’t bother me any more. I just want to see my kids and my grandkids.

Just before lockdown, they began filming a reality show called The Nolans Go Cruising, with Coleen and Maureen – which was the first time the sisters had all been together for about 20 years. The trip was a great success, but they doubt they’ll sing together professionally again.

“It wouldn’t be the hip hop tour, it would be the hip op tour,” says Linda, laughing. “We’d come down the Stannah Stairlift singing, ‘Don’t you think your girlfriend is ‘not’ like me?’”

Anne is more optimistic, saying they could do an album, or An Evening With The Nolans, sitting on stools and answering questions from the audience.

It’s so sad to watch this knowing what Linda and Anne are going through. Here’s to a speedy recovery and hopefully a full reunion tv special ❤️#TheNolansGoCruising

How do they remain so positive?

“You have two choices,” says Anne. “You can let it get to you and be down all the time, which doesn’t help you or your family. Or you can be positive. And the more positive you are, the better your life is.”

Linda adds: “My oncologist says that being positive is as important as the drugs. And I’ve got a lot to live for. I have a fabulous family and wonderful friends.”

So, I’m at just over 11 months past my 2nd kidney cancer surgery today! How did I go out and live in the now…I did a 17 mile run! Felt amazing! #DontLetCancerWin

Anne sums up the pair’s advice for women diagnosed with cancer.

“Try to not make cancer define you. Live your life the way you want to.”

Stronger Together by Linda & Anne Nolan is published by Ebury Press. Available now.

Apple event set to be ‘action-packed’

Things you only know if you’re brand new to yoga