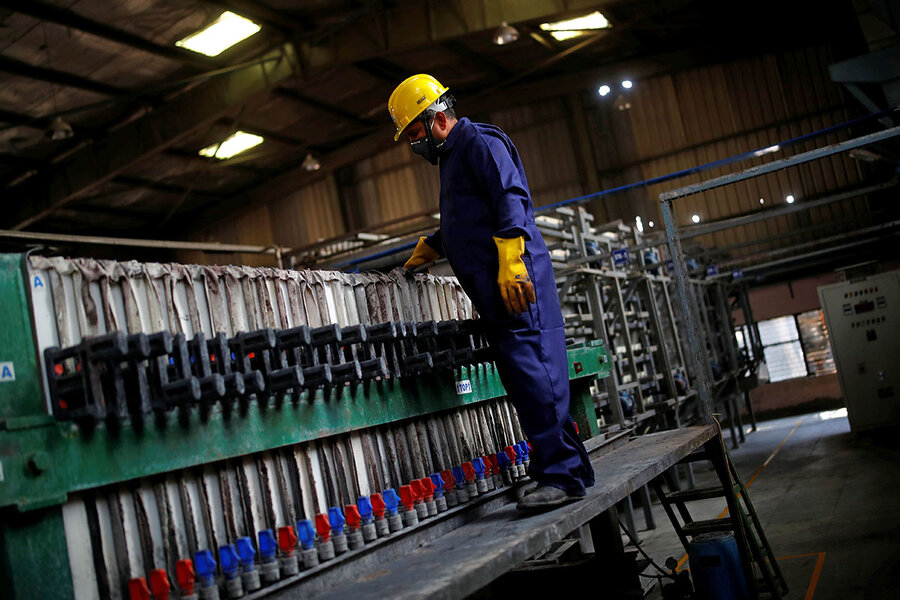 A handful of startups are trying to find a new way to recycle used car batteries, using water, chemicals, and electricity to produce lead instead of the hazardous, high-heat smelting that has been identified as the world’s most polluting industry.

One of the first to bring a new recycling technology to market is ACE Green Recycling Inc, which has developed a room-temperature process that turns lead from scrap batteries into ingots, its Singapore-based CEO Nishchay Chadha told Reuters.

At its recycling plant in Ghaziabad, on the outskirts of the Indian capital New Delhi, the firm uses machines that run on electricity to refine lead components from scrap batteries into briquettes, which are then cast into ingots and sold to battery manufacturers. Plastic and other components are recycled separately.

Worldwide, the start-ups so far form only a tiny fraction of the lead battery recycling industry, which is estimated to be a $17.5 billion per year business, counting for just the lead value. But they claim the new technologies produce next to no emissions compared to traditional smelting.

Analysts and experts said the new technologies are promising but it was too early to say if any of them was commercially viable on a large scale.

Typically, traditional battery recycling units use an ultra-hot furnace at over 1,000 degrees Celsius (over 1,800 degrees Fahrenheit) to refine lead components. If the unit is unregulated, as many are in poorer nations where the sales of cars and car batteries are surging, toxic fumes often escape into the air and effluents seep into groundwater.

Pure Earth and Green Cross Switzerland have said lead battery recycling is the most polluting industry in the world. “Emissions and fugitive dusts released from the small scale melting and casting of molten lead and from waste are the main exposure pathways,” the agencies said in a 2016 report.

Farid Ahmed, the principal lead analyst at Wood Mackenzie, said the new technologies had “the potential to be game-changers.”

“But [they] need to reach that point where they can establish the validity of their processes when scaled up to industrial levels of output, plus that they can be competitive in production costs,” he said.

Recycling of lead batteries accounts for about two-thirds of the world’s supply of refined lead, which is also used in cables, ammunition, and paints.

The metal currently trades at roughly $2,000 per metric ton.

One percent of refined lead

“We use electricity, and that helps our plant operate at room temperature, and that’s why there’s zero-emission of gases and effluents from our plant,” Dhruvendra Kumar Tyagi, ACE Green’s general manager, told Reuters.

Luminous Power Technologies, owned by France’s Schneider Electric and one of India’s largest auto battery manufacturers, provides ACE Green with more than 200 metric tons per month of used batteries, which ACE said it turns into 120-130 metric tons of lead and sells back to the firm.

Luminous did not respond to a Reuters request for comment.

ACE Green has signed an agreement with Altus Asia Group in Singapore to license its technology to recycle 5,000 metric tons per year of used lead-acid batteries in the first half of 2022, with the potential to double that capacity in 2023, said David Leong, its managing director.

The investment for this plant will be $5 million, which Mr. Leong expects to raise via private equity and private partners.

“[The technology] basically solves all the problems of running a traditional lead recycling smelter,” said Mr. Leong, adding that the company plans to also set up plants in Malaysia, Vietnam, and South Korea using this technology.

All of that would be equivalent to 1% of the world’s recycled lead.

Other companies are developing similar processes.

Nasdaq-listed Aqua Metals, which uses water-based solvents at room temperature to recycle used batteries to produce refined lead, is not initially looking to replace informal recycling or backyard smelting but is focusing on the regulated market where its product can be marketed as an environment friendly, bolt-on technology, Chief Executive Steve Cotton told Reuters.

He said he plans to commercialize the process and roll out licenses as early as June this year.

Ola Hekselman of Imperial College London has been working on a proprietary solvents and chemical process to extract lead from batteries and has co-founded a company called Solveteq which aims to commercialize the technology in the next 18 to 24 months.

“Just being sustainable and green may not be enough for us to convince others to switch to this technology,” Ms. Hekselman said.

“We have to be economically more competitive as well.”

Apple unveils AirTags, new iPad Pro and more at its 1st event of 2021