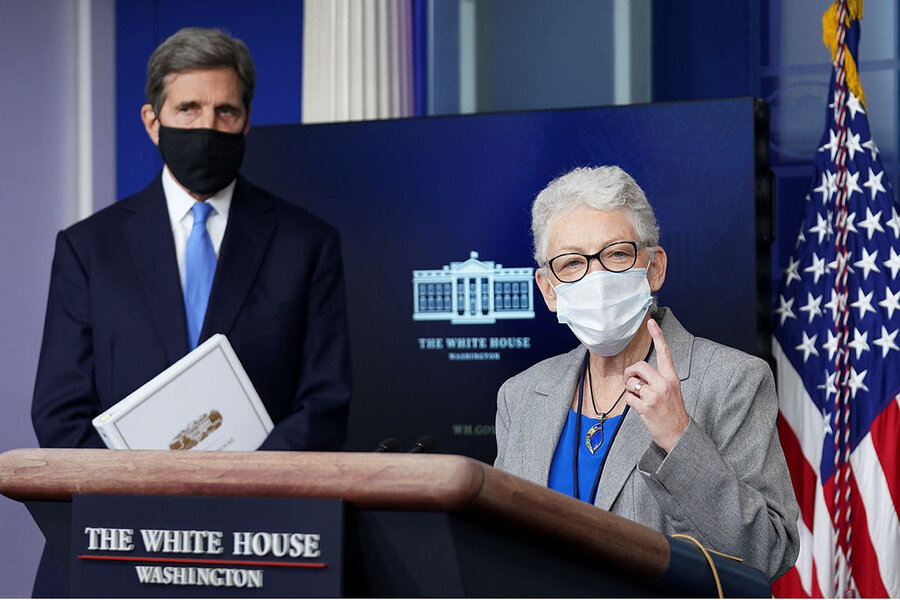 “When he hears the word ‘climate’” she said of President Joe Biden at a press briefing earlier this month, in a line that has become familiar, “he thinks jobs.”

She went on to discuss the possibilities of new innovation, of “grabbing back the supply chain we have lost offshore,” and about “growing millions of good-paying union jobs.”

“We need to show people that America matters, that we are going to be leaders again,” she said.

She is far from alone in this rhetoric, which runs more campaign-trail-meets-unions than traditional environmentalism. Ever since President Biden unveiled his sweeping, $2 trillion American Jobs Plan on March 31, there has been a decided narrative shift among administration officials advocating for climate action. Largely absent are the doomsday predictions and dire timetables for warming temperatures. In their place are breathless visions of an American-dominated electric vehicle industry, predictions of entrepreneurial innovation, and promises of clean energy independence.

All of this, those who follow climate policy say, is intentional. In part the goal is to win vital labor support for the administration’s huge environmental investment proposal – an effort that shows some early signs of success. More broadly, the aim is to merge the long-siloed policy areas of jobs and environmental protection.

“It’s no longer the green economy, the clean economy – it’s just the economy,” says Ryan Fitzpatrick, director of the climate and energy program at Third Way, a center-left think tank. “So right now it’s not a conversation about whether we are going to, say, shift to electric vehicles. It’s about how fast, and how much can we get out ahead of that shift – for workers, industries and consumers.”

This, Mr. Fitzpatrick says, has been part of President Biden’s approach to climate conversations ever since the campaign trail.

Indeed, when President Biden introduced his American Jobs Plan at the Carpenters Pittsburgh Training Center, he mentioned the word “climate” only once. Instead, the focus was on jobs (a word he said 28 times), economic development, and infrastructure. The climate action in the proposal is largely intertwined with these other goals – $174 billion to electrify the nation’s transportation system, for instance, which would include a nationwide network of electric vehicle chargers; or $213 billion to produce, preserve, and retrofit affordable housing, which would include energy efficiency measures.

“Climate is integrated into everything,” says Joel Jaeger, a climate research associate at the World Resources Institute. “From making sure that buildings are resilient to climate impacts to retrofitting buildings to be more energy efficient.”

According to Mr. Jaeger’s analysis, nearly $1 trillion of the plan would go to sectors that fall broadly under the umbrella of climate change, clean energy, and environmental justice. But as Ms. McCarthy said earlier this month, all of that is part of “very good economic policy.”

Money invested in retrofitting old buildings, restoring public transportation infrastructure, and developing an electric vehicle charging network, for instance, would reduce emissions but also spark more innovation and allow for future growth, supporters say – all while providing millions of new jobs, the bulk of which do not require a college degree.

Many unions have gotten on board with support, including some that opposed the Green New Deal resolution. That 2019 plan, generally seen as a politically left-wing proposal, attempted to merge environmental action with social justice goals, including employment.

Lonnie R. Stephenson, for instance, international president of the International Brotherhood of Electrical Workers, which opposed the Green New Deal, said the American Jobs Plan would be “creating millions of good-paying union jobs building a 21st century modern infrastructure and a clean-energy future for our nation.

“It will also spur a renaissance in made-in-America manufacturing, bringing new jobs back to American communities,” he said in a statement.

​Concerns remain, however. On the right, many still connect climate action​ to “liberal, environmentalist job killing,” as Alabama Rep. Mike Rogers, a Republican, put it in a statement opposing Mr. Biden’s proposal.​ ​On the left, some advocates believe that truly addressing climate change will require significant ​rollback of energy-hog ​lifestyle​s and patterns of global capitalism, while others worry about how to ensure that green jobs offer living standards equal to the fossil fuel jobs they are replacing.

Still, some researchers say investment in green infrastructure can create many more jobs than those lost in fossil fuels. Congress will be debating the details of the Biden plan, but one independent forecast, by Moody’s Analytics, projects the U.S. economy will have 2.5 million more jobs in 2030 under the Biden infrastructure plan than without it.

​Amid the longstanding debate over the economics of ​combating climate change​, some experts say the Biden team’s effort to unite climate policy and jobs comes as a relief. ​

“I’ve been pushing in this direction for a long time,” says Steven Cohen, a professor at Columbia University who is the former executive director of the school’s Earth Institute. “Personally, I think part of the problem with people who study climate change is … they want to make people do without in order to address the climate issues. And that, politically, isn’t going to go anywhere.”

Far from being at odds, climate action and jobs have a positive relationship, Dr. Cohen and other researchers have long argued. A slew of studies from groups ranging from The Sierra Club to the business and environment group E2 show that climate-related investment leads to job growth. And many advocacy organizations have been working behind the scenes for years, promoting both this approach to climate action and the collaboration between labor and environmentalists.

“We’ve had a very consistent message … to both labor and the environmental movement that we have to come up out of our silos that have kept us apart and learn how to work together,” says Joe Uehlein, president of the Labor Network for Sustainability. “The environmental movement is now speaking out on jobs and worker protection policies in a way that is somewhat new, and certainly reinvigorated, in a big way. On the other side, there are a number of big unions that are moving on the climate issue.”

Increasingly too, corporations have come to see unchecked global warming as a major threat to their future prospects. ​And a​ growing network of conservative-leaning clean energy organizations is promoting renewable power as an economic opportunity.

To some extent, scholars say, all of this might be moving the climate debate away from the identity marker it has been to a more classic policy debate, in which belief about climate change matters less than one’s position on government investment and priorities.

As Mr. Fitzpatrick says, “You don’t have to care about climate change to want to secure the supply chain for electric vehicles.”