The author of this homemade product is fond of photo/video shooting. Some time ago, his father gave him an old Sony HDR SR11 camcorder. It's not the newest or best camera, but it does a pretty good job of capturing HD video.
For the camera, he bought a wide-angle lens, a small microphone and updated the battery. All this made the camera rather bulky and inconvenient to use. There was also no backlight on the camera. To solve this problem, he decided to make a camera holder. It makes it much more convenient to hold the camera, and two LED strips emit bright light for filming. Additionally, Wider camera grip also increases stability while shooting.
Tools and Materials:
-3330mAh Battery4
-Outdoor microphone RODE VideoMicro; -Wide-angle lens 0.39 mm/micro-lens;
-Plywood 12 mm thick;
-Dowel diameter 35 mm. ;
-Joiner's glue;
-Small nails;
-Insulating tape;
-Aerosol paint/varnish;
-Two bolts for fixing the camera;
-LED strip 24V; – Adapter from Micro USB to DIP; -DC/DC step-up module; -Toggle switch;
-Wire;
-Powerbank 5 V; -Circular saw; -Milling cutter; -Cordless drill; -Sanding machine/sandpaper; < br>-Tools for measuring and marking;
-Clips; -Soldering accessories;
-Nadfiles;
-Multimeter;
Step one: frame
To begin with, he cut two strips of plywood. These will be the top and bottom of the frame. The length of the workpieces should be such that it was possible to freely place a camera with an open display on it, and two dowels could be placed at the edges. The top width was the same as the dowel (35 mm). He made the bottom one a little wider to better support the camera, and the frame could easily stand on its own.
Then he cut off two pieces of LED strip. It will be attached at the top and bottom of the frame to the end of the plywood.
And so that the tapes do not “stick out, he made grooves with a mill. 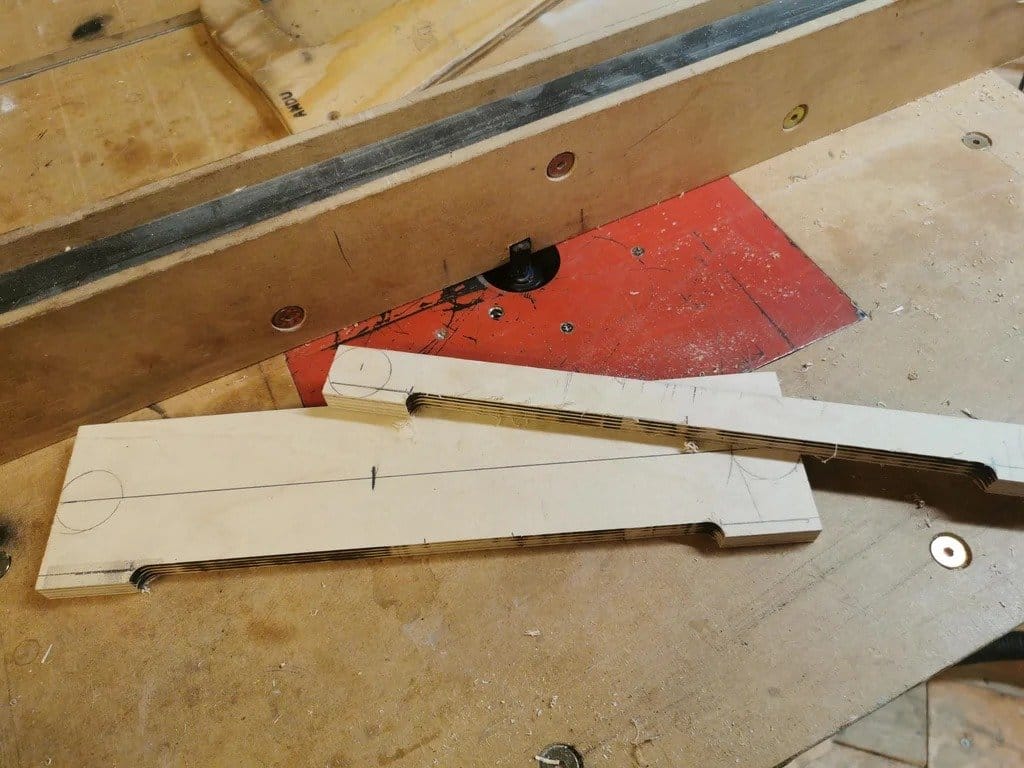 Then he drilled holes for 5mm diameter wires. Then he glued the frame and fixed it with nails.
To secure the camera to the frame, he added two bolts. One is for actually mounting the camera and the other is for keeping the camera straight. The location of these bolts was determined by measurement. To keep them level with the bottom, he made a countersink.
To make it easier to remove the battery, he made a notch at the bottom, and drilled a hole in the bottom of the frame to install the holder on a tripod.
The last thing to do with the frame was to sand it. The master processed all corners with a disk sander.
Step two: electronics
For LEDs to work, you need to assemble a small circuit. The circuit consists of a Micro USB to DIP adapter, a boost module and a switch. All this is installed in a plastic case.
A toggle switch is installed between the adapter and the module. The toggle switch cuts off the positive power wire, the minus is directly soldered.
On the step-up module, you need to adjust the voltage to 25 volts. To do this, you need to connect the power to the output of the multimeter probes. There is a special adjustment screw on the board. By twisting or unscrewing it, the voltage is regulated.
Then he placed it all in a plastic box. I cut a hole for a USB port in the side of the box. Then the body was glued to the camera body with hot glue. 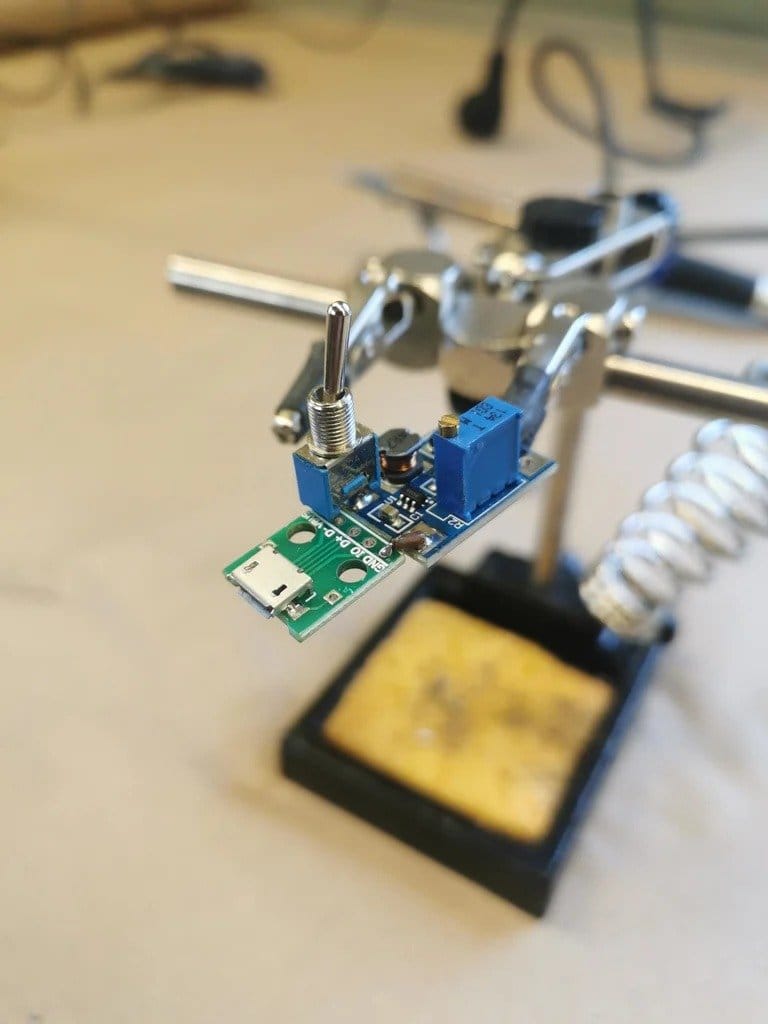 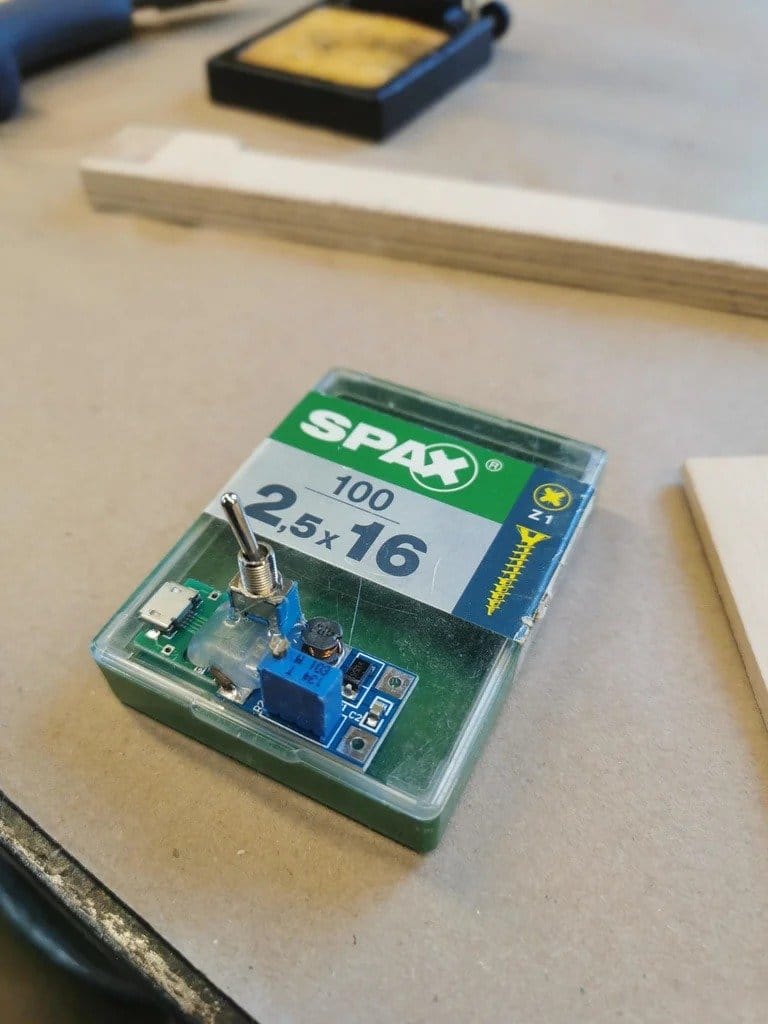 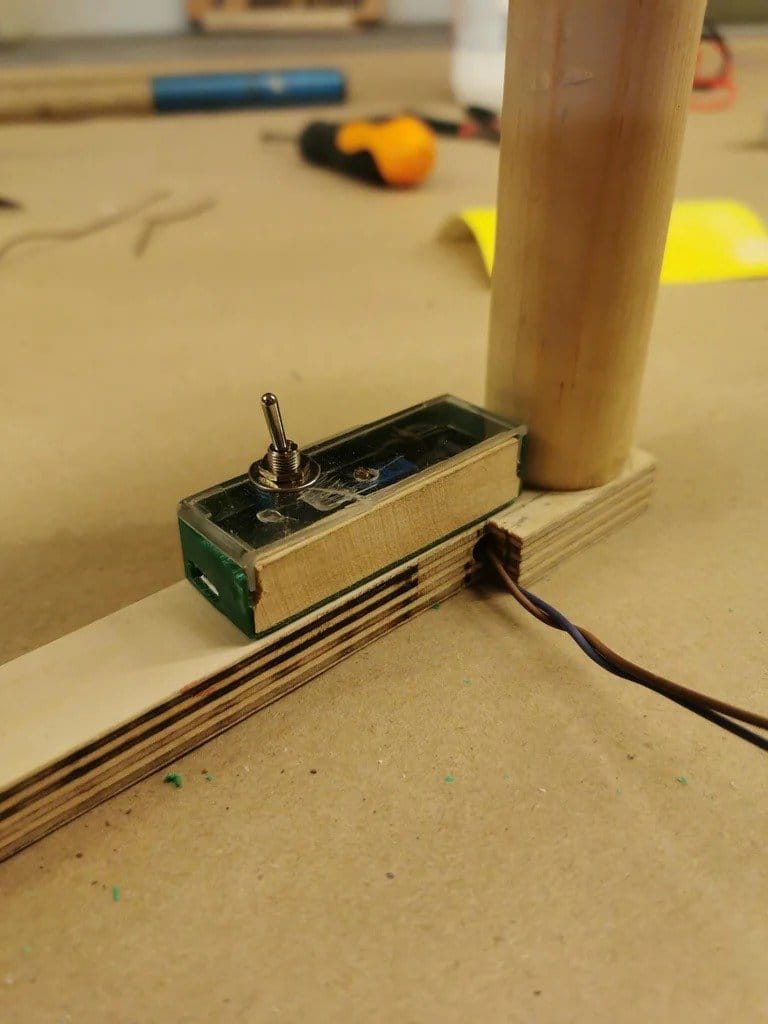 Step Three: Painting
Before starting painting, he sealed the dowels, wires, switch and USB port with masking tape.
Then he applied two coats of matte black spray paint. Then he removed the masking tape from the dowels and applied two more coats of spray varnish. 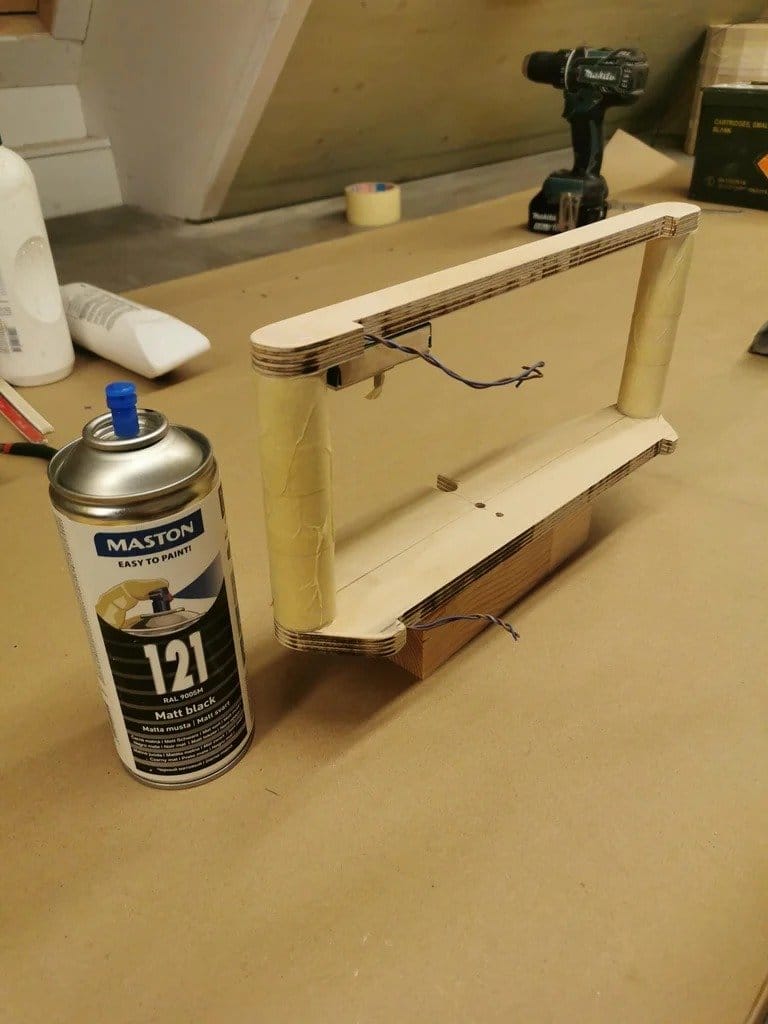 Step four: small details
Adding the LED strips was the hardest part of the whole assembly. First you need to solder the wires to the contact pads of the LED strip. Then I connected the other ends of the wires to the minus of the step-up module and to the plus of the toggle switch.
The power supply of the circuit will come from the power bank. It is attached to the frame with a strap.
Next, you need to fix the microphone mount and the microphone itself. 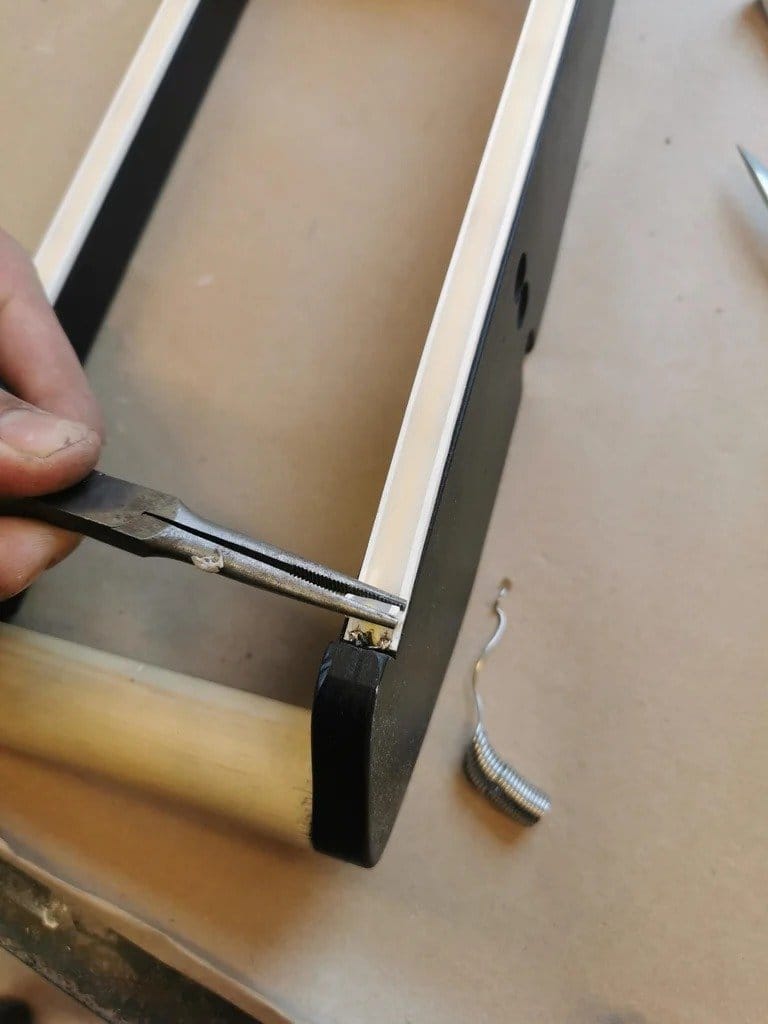 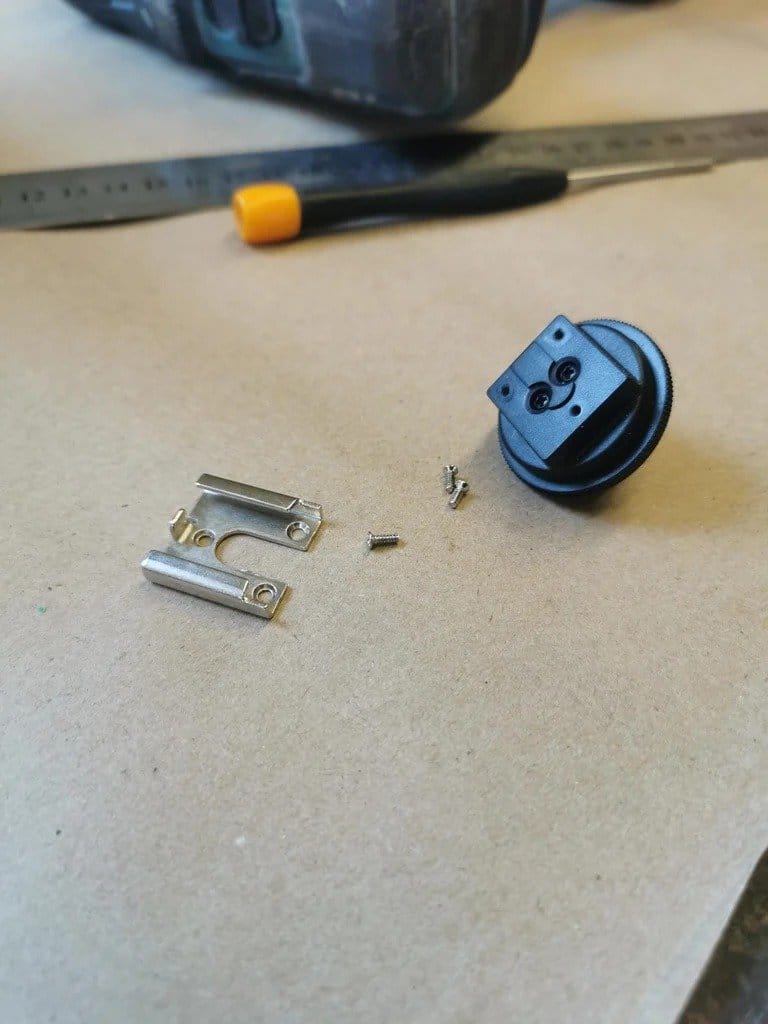 Everything is ready.
The whole process of making such a holder can be seen in the video.

Doorbell with SMS alert (via the Internet)

How to make a quick release platform for a locksmith vice