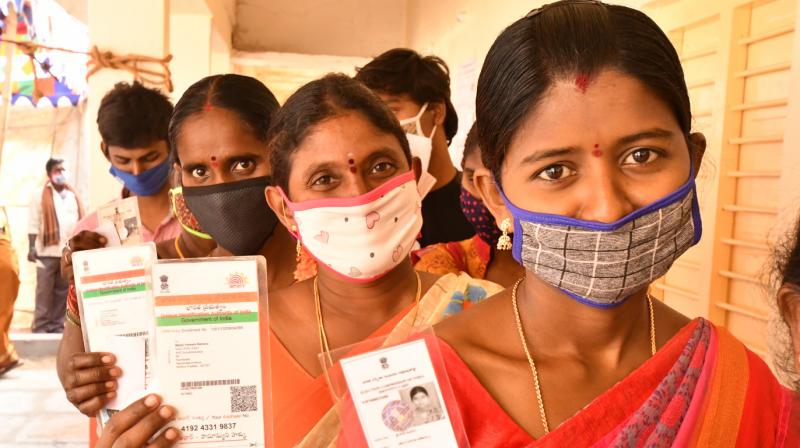 Hyderabad: The ruling Telangana Rastra Samiti (TRS) is upbeat following the record 89 per cent polling, the highest in the past three elections, recorded in the Nagarjunasagar Assembly byelection on Saturday.

TRS leaders said the higher polling percentage in recent Legislative Council elections had worked in favour of TRS and the same would be repeated in Nagarjunasagar. They exuded confidence of securing a majority that would be higher than what was recorded in the 2018 December Assembly polls.

In 2018, TRS candidate Nomula Narasimhaiah had won with a majority of 7,726 votes over Congress candidate K. Jana Reddy and TRS is confident that Narasimhaiah's son Bhagat will surpass his father's margin of victory.
The leaders claimed that the higher poll percentage was due to the success of the party's 'micro-level booth management', under which it appointed an in-charge for every 20 voters.

Mission Chanakya, which predicted BJP victory in 2020 Dubbak Assembly bypoll, TRS victory in 2018 Assembly polls and 2020 GHMC polls correctly, observed that TRS has the edge over its rivals in Nagarjunasagar. It made these observations after interacting with a voter-base of about 80,000 voters.
"It was found that there was no anti-establishment wave against TRS.

Nagarjunasagar is predominantly an agriculture-based constituency where 90 per cent of voters are farmers and TRS government's pro-farmer policies and schemes helped it to garner the majority support. Besides, there was 'institutional support' for TRS which Congress and others lacked," said Shiv Keshav Amuka from Mission Chanakya.

TRS in-charge for Nagarjunasagar bypoll and MLC Palla Rajeshwar Reddy expressed confidence that the party will retain the seat with a higher majority compared to the previous election.

"The reports obtained from our cadre from all areas in the constituency indicate that there was a positive vote in favour of TRS and we are confident of surpassing the 2018 majority," Reddy said.

Congress could soon get answers about Epstein’s suicide