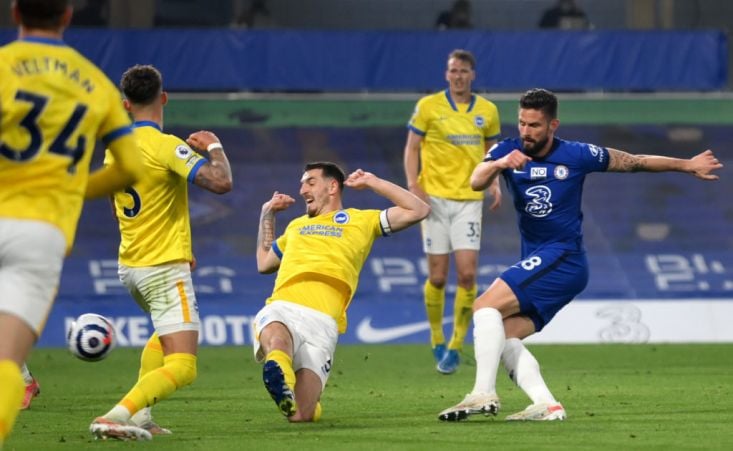 Chelsea ground out a goalless Premier League draw with 10-man Brighton as the club’s decision to quit the European Super League hung heavy over Stamford Bridge.

Brighton had Ben White sent off for a second booking at the death, having already wasted the game’s best chances through Adam Lallana and Danny Welbeck.

Blues boss Thomas Tuchel had predicted calm in the eye of the storm for the Brighton clash, with the Super League dominating all talk and conjecture in the build-up.

Less than 90 minutes before Tuesday night’s kick-off news filtered out that Chelsea were preparing documents to leave the Super League that had only been announced late on Sunday.

Top players would jeopardise international football by playing for clubs in the Super League, and so Chelsea’s squad can easily be forgiven for a rare lack of focus.

A hard-won point still keeps the Blues in the top-four fight however, with all eyes now turning to Saturday’s crucial trip to fifth-placed rivals West Ham.

A breathless day of brinkmanship, recrimination and eventually relief gave way to an evening of stalemate.

Two police cordons braced for any clashes, but by the time the officers would have been called into any action news had filtered through of Chelsea’s impending withdrawal.

Technical director Petr Cech pleaded with fans to stay calm on his arrival at Stamford Bridge, and is thought to have told them to give the club time to handle the situation.

Less than an hour later, the Blues had put the wheels in motion to leave the controversial competition, which has met with a wall of resistance across the country, from politicians, supporters and high-profile footballing figures.

As the crowds read the breaking news of Chelsea’s U-turn, supporters traded fury for relief, and anger for celebration.

Events in the boardrooms, on conference and Zoom calls meant Chelsea did not even announce their match squad on social media.

Cech was settled into his seat in the stadium in time for the delayed 8.15pm kick-off, calmly sipping a coffee in stark contrast to his earlier passionate fan address.

Mason Mount showed his versatility again by operating at the base of midfield alongside Jorginho, but Chelsea could not create any genuine goalscoring chances in a lacklustre first-half.

That the Blues failed to hit full tilt is hardly surprising given the swirling Super League situation.

The second half continued in the same vein as the first however, with both sides looking tired and cancelling each other out.

Brighton snatched some momentum in the late exchanges with Lallana spurning a fine chance and then Welbeck whipping a shot against the post.

There was still time for White to receive his second yellow card and his marching orders, but not enough for either side to break the deadlock.